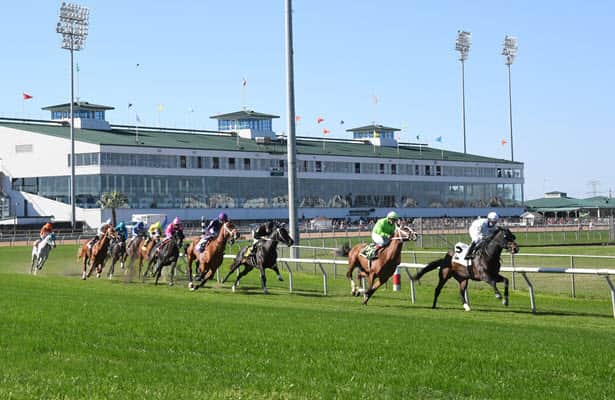 Sam Houston Park's Houston Racing Festival, which this summer was reportedly on the brink of being canceled for 2023, will be held on Jan. 28 as part of the track's 43-day Thoroughbred meet.

Although the Houston Racing Festival is a go, there will be changes to the Sam Houston meet, which opens Jan. 6. The most notable changes are a reduction in the number of race days from 50 to 43 and the resulting overnight purse money. Also in an effort to aid on-track attendance, Sam Houston will move to daytime racing with a 2 p.m. EDT post Friday through Sunday.

In August, reports surfaced that next year's Houston Racing Festival would be canceled. This followed the Texas Racing Commission's decision to withdraw from the Horseracing Integrity and Safety Authority, which launched July 1 and provides federal oversight for the U.S. Thoroughbred industry.

With Texas racing not under the jurisdiction of HISA, by federal law the state's racetracks cannot export their simulcast signal across state lines. This resulted in a massive decline in handle this summer at Lone Star Park, which conducted the most recent Thoroughbred meet in Texas.

Betting on Texas racing is now limited to the state's racetracks, simulcast centers and international markets. Advanced-deposit wagering is illegal in Texas.

Frank Hopf, assistant general manager at Sam Houston, told Horse Racing Nation the track managed to come up with the money "to keep the stakes program intact as much as we could." Among other things, simulcast signals from out of state can still be imported to Texas wagering facilities, which aides the purse account.

"Obviously, our purse structure is going to take a hit because of the lack of exporting," Hopf said. "But we still have money that we've already been earning from simulcasting, and we do still have money from the (Texas Horse Industry Escrow Account) that was put in place a few years ago. We've been working with the horsemen's groups and were able to have enough purse money to keep the stakes program intact as much as we could."

The Texas Horse Industry Escrow Account, which was created by the state legislature in 2019, is funded through a percentage of sales tax generated by the sale of horse-related items in the state such as feed and tack. According to the Texas Quarter Horse Association, the escrow account receives up to $25 million each year. A maximum of 70 percent of that can go toward purses, with the remainder earmarked for promoting the state's horse industry.

In total, Sam Houston will run 19 stakes with combined purses of just over $2 million. In addition to the Houston Racing Festival program, the track also will host Texas Preview day with five stakes for Texas-breds on Feb. 18 and Texas Champions day for Texas-breds on March 25, which features seven stakes each carrying a $100,000 purse.

"The mindset we have for the upcoming season is to handle the situation as it is and try to make the most of it," Hopf said.