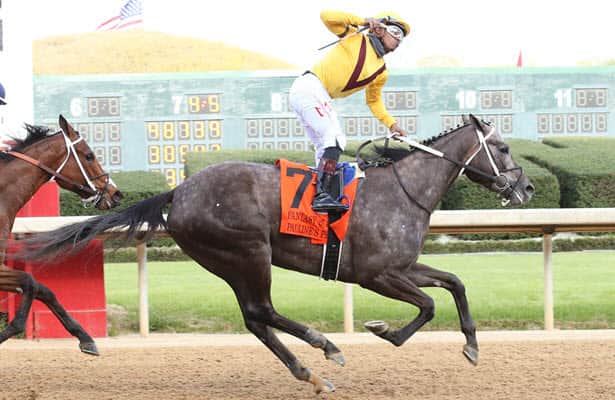 A victory by Pauline’s Pearl would vault Asmussen into the record books as the only conditioner to win three editions of the Houston Ladies Classic. He won with Midnight Bisou in 2019, the remarkable champion who went on to capture five Grade 1 stakes, banking $7.4 million and was honored as 2019 Eclipse Award-winning older female. Asmussen also captured 2020 Houston Ladies Classic with Lady Apple, a then-5-year-old daughter of Curlin owned by Phoenix Thoroughbred III.

Pauline’s Pearl will be making her 11th career start on Sunday. She made her debut at Fair Grounds last year before shipping to Oaklawn Park for the 2021 Honeybee (G3) on March 6. She finished second in that race before her triumph in the $600,000 Fantasy (G3). The gray filly completed her 3-year-old campaign with a victory in the Zia Park Oaks on Nov. 23.

Asmussen sent the Kentucky-bred filly back to Fair Grounds, where she had a series of works in December and January before vanning to Houston last week. On Saturday she looked comfortable jogging on a fast, main track under exercise rider Eulalio Rivera.

“She’s a very nice filly,” Asmussen said. “We have had success with both Midnight Bisou and Lady Apple in this race and look forward to running Pauline’s Pearl for Stonestreet Stables.”

The Mary Rose, bred and owned in Arkansas by Shortleaf Stable, will ship to Houston from Oaklawn Park on Thursday, according to her trainer John Ortiz. Ortiz has conditioned the 5-year-old Macho Uno mare since last summer with four on-the-board placings in five starts. She finished her 2021 season with a seven-length score in a $50,000 allowance at Oaklawn on Dec. 31.

“The light bulb turned on for me in her second race last August at Colonial Downs,” Ortiz said. “She pretty much sprinted. I wanted to see what she did going two turns, and she blew the doors off in her last race.”

Jockey Reylu Gutiérrez has the call and will break from the far outside post at odds of 3-1. The talented young rider will make his second appearance in the Houston Ladies Classic after riding Jeweled Princess last year for Kenny McPeek.

Shipping from Fair Grounds in New Orleans will be Lothenbach Stable’s Audrey’s Time, who just won the $75,000 Joseph Spanky Broussard Stakes for trainer Neil Pessin. Corey Lanerie has the return call aboard the 5-year-old daughter of Uncle Mo.

Trainer Mike Stidham has entered Velvet Crush, a 5-year-old Tapit mare bred in Kentucky by Calumet Farms and owned by Famousstyle Stables. Stakes placed at Monmouth Park and Belmont Park, she ran third to Audrey’s Time at Fair Grounds last month. Current Sam Houston-leading jockey Ry Eikleberry has the call and will break from the rail at odds of 8-1.

Trainer Scott Gelner who competed in last year’s edition of the race with Shes Our Fastest for Norman Racing Stables, will saddle Becca’s Rocket  for the same connections with Adam Beschizza in the irons. The 4-year-old daughter of Orb will be making her 16th career start.

Golden Curl, owned by George Sharp, will ship in from Turfway Park. The 6-year-old Curlin mare is trained by Shawn Davis with Tyler Gaffalione flying in from Gulfstream Park to ride.

Champagne Affair will make her Sam Houston debut for owners L & G Racing Stable. The Kentucky-bred daughter of Daredevil will be ridden by Ernesto Valdez-Jiminez for trainer Cesar Govea.

The Houston Ladies Classic is the seventh race on Sunday’s card with a post time of about 5:53 p.m. EST.