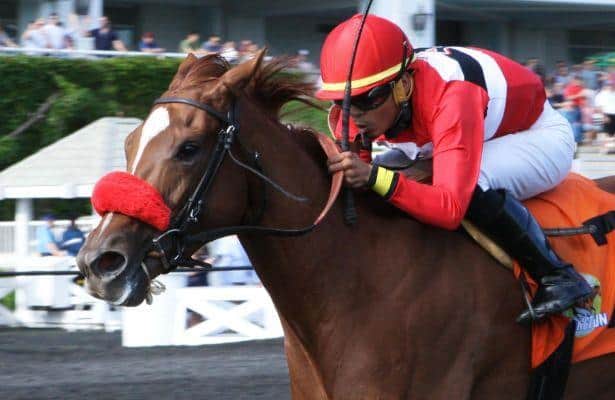 Hotshot Anna nearly set a track-record time Monday when she pulled ahead to win the Grade 2, $400,000 Presque Isle Downs Masters Stakes, finishing the 6 ½ furlongs over synthetic in 1:14.73.

The win extended Hotshot Anna’s win streak to four, including Satin and Lace Stakes at Presque Isle Downs and the Grade 3 Chicago Handicap at Arlington.

Defending Masters winner Ami’s Mesa, runner-up in last year’s Grade 1 Breeders’ Cup Filly and Mare Sprint, finished out of the money. Bar of Gold, second in the 2017 Masters, flipped the tables on Ami’s Mesa in the Breeders’ Cup.

In this year’s edition, Jockey Antonio Gallardo allowed Hotshot Anna to settle in third as Code Warrior and Lady Alexandra went for the lead. Code Warrior set opening fractions of 22.30 and 44.73. Ami’s Mesa was in the middle of the 11-horse field, waiting to pounce under Luis Contreras.

Initially behind horses, Hotshot Anna found room after turning for home and she spurted away a 4 ¼-length winner.

“Last time, she won so easy,” Gallardo said of his Satin and Lace win aboard Hotshot Anna. “She won at seven furlongs before (in the Chicago). I knew 6 ½ furlongs would be good for her.”

Let It Ride Mom, Crazy Sweet and Browse ran late to finish behind the winner. Ami’s Mesa was eighth.

“She had no place to go but where she went,” winning trainer and owner Hugh Robertson said of Hotshot Anna’s tight position. “When she got a chance she went through it.”

“I didn’t think there was anybody that was going to beat her when she got through,” he added.

As for what’s next, Robertson said Hotshot Anna will probably be turned out.