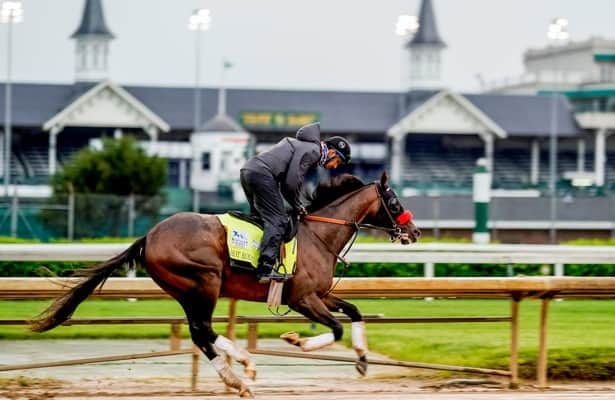 When five former Brown University football players formed Boat Racing LLC – named after a beer-chugging game they played as Theta Delta Chi members – they intended to dabble as Thoroughbred owners to maintain the brotherhood they enjoyed.

Now that Hot Rod Charlie, the third horse they ever owned, is Belmont Stakes-bound after he rallied to finish a hard-driving third in the Kentucky Derby, the group has added a sixth man to pay forward their remarkable good fortune.

That would be fun-loving Dave O’Neill, who was told he had six months to live because of melanoma but survived a year and a half beyond that so he could see his son, Patrick, graduate from Brown in 2015. Dave died about one month after graduation ceremonies. He was 57.

The young professionals who compose Boat Racing – Patrick O’Neill, Eric Armagost, Dan Giovacchini, Reiley Higgins and Alex Quoyeser – committed to donating one-sixth of Hot Rod Charlie’s earnings to the Melanoma Research Alliance. Their generosity started with one-sixth of the $300,000 "Chuck" banked while finishing a length behind front-running Medina Spirit in the Derby.

The O’Neill family has been dealt two tremendous blows by melanoma. Danny O’Neill was only 38 when he succumbed to the potentially lethal form of skin cancer, only to be followed by his brother Dave. Patrick is screened every six months and said he already has had several moles removed as a precaution.

Doug O'Neill commended the young men for turning the media attention they are receiving into such a force for good.

“They want to use Charlie as a platform to get the word out about screening in honor of both of my brothers who died from melanoma,” he said. “As proud as I am of Charlie, I am equally proud of the human connections.” Boat Racing partnered with Greg Helm’s Roadrunner Racing, William Strauss and Antony Beck’s Gainesway Thoroughbreds on the Oxbow colt.

Dave O'Neill was diagnosed with melanoma after Patrick’s sophomore year. He did everything possible to keep the dreadful disease from diminishing the time he had remaining. He often would make long flights from his home in Hawaii to see his son play for Brown. There were times when he acted as though he had thrown a pass or made a tackle in another victory.

“We knew Dave well from coming to all of the games and celebrating with us afterward, drinking beers,” said Armagost. “If Patrick hadn’t said anything, you wouldn’t have known because (Dave) was just smiling from ear to ear. He was such an awesome person, such great energy.”

“He was like one of the players after the game. It was hilarious,” said Dennis O'Neill, a survivor of non-Hodgkin’s lymphoma. “The whole team kind of knew him and he definitely liked to have a good time, no doubt about that.”

“I’m so blessed to have had him in my life for 22 years,” he said. “There are a ton of people who never know their dad, so to have 22 years of the man I can call my best friend is pretty special.”

Patrick is vice president for sales and strategic partnerships at Founder Sports Group in San Diego. The wonderful ride with Louisiana Derby (G2) winner Hot Rod Charlie is helping him to move forward.

“I think he is one of the strongest people I ever met,” said Giovacchini. “I really think horse racing and Boat Racing is a support structure for him. He has sort of been able to combine family time with friendship.”

Armagost expressed respect for the O’Neill family and its ability to withstand all that it has endured.

“We’re all graduating from college and launching our careers. For Patrick to have that burden, no doubt it was a tough time,” he said. “But that family is so strong. … They all kind of rallied together through the adversity and grew closer.”

While understanding that no one could possibly replace Dave, Dennis has done everything he can to fill the immense void left in Patrick’s life.

“He had a really tough time of it for quite a while,” Dennis said.

Dennis said he makes certain to call his nephew at least once a day. He estimated that he texts him 10 times a day.

Then there is the unwavering support of the Boat Racing brotherhood – with a sixth man who will never be forgotten.