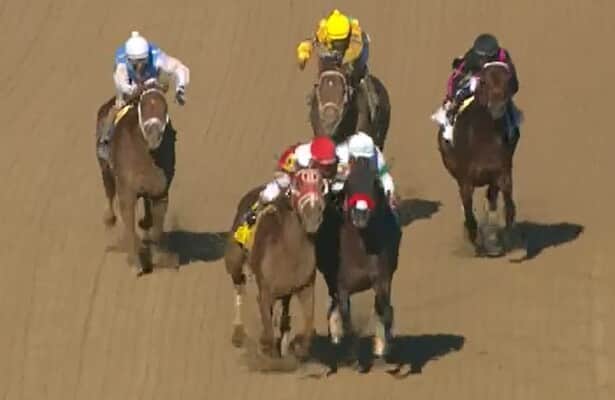 Hot Rod Charlie fought back and won the Grade 2, $500,000 Lukas Classic by a head. Jockey Tyler Gaffalione was reunited with him. They will be together in the Breeders’ Cup Classic next month for trainer Doug O’Neill.

But that was not the story Saturday at Churchill Downs. The real tale was the one of a loose saddle that undid what would have been another storybook upset for Rich Strike. It was nearly a disaster for jockey Sonny León.

“Sonny said the saddle loosened to the left,” Rich Strike’s trainer Eric Reed told Horse Racing Nation. “He said, ‘I started to lose my balance. The saddle slipped over and made me lean to the left.’”

A head-on replay showed León hanging on for dear life as he slid to his left, sideswiping Hot Rod Charlie in the fight to the finish.

“If that doesn’t happen, we win the race,” Reed said.

So it was that Rich Strike, the horse whom critics branded an 80-1 fluke of a winner in the Kentucky Derby, acquitted himself again after narrowly missing second place in the Travers (G1) and getting a 105 Beyer Speed Figure, according to Daily Racing Form.

In his first start against older horses, the only 3-year-old in the race blazed past all his rivals with a stretch run down the middle of the track. Not inside horses as had been his wont. And he had the lead late. Rich Strike (9-2) was going to win the race.

Until the saddle slipped. And until Hot Rod Charlie (6-5) said not so fast.

“He hooked the toughest horse he ever ran against,” Reed said. “He ran on the outside the whole way. … It’s so bittersweet to lose that way, but Doug’s horse is a warrior.”

Not to forget Hot Rod Charlie, himself critically viewed as a horse who could compete but not find a way to win the big one. Third by a length in the 2021 Kentucky Derby. Second in a toe-to-toe fistfight with Essential Quality in the 2021 Belmont. A threatening second but unrequited against Country Grammer in this year’s Dubai World Cup (G1). Too late with a kick that left him third to Life Is Good and Happy Saver last out in the Whitney (G1).

Oh, Hot Rod Charlie was that fluke, too. He was a 94-1 runner-up, missing by three-quarters of a length against Essential Quality in the 2020 Breeders’ Cup Juvenile.

“Now he’s a much bigger, stronger horse,” said Gaffalione, who last rode Hot Rod Charlie in that near miss at Keeneland. “He’s much more composed. He’s a complete, class act, and he just does everything right.”

In spite of a Grade 1 breakthrough in last year’s Pennsylvania Derby, there still was that rap on Hot Rod Charlie that he would give ground to the alpha dogs. On Saturday he was the alpha dog.

“That’s what we keep thinking,” O’Neill said. “I actually work him intentionally having him pull away from other horses trying to get him to really enjoy separating himself. He’ll be the leader, but he wants to be part of a pack. Coming back and getting it done (against Rich Strike), that’s an awesome effort.”

Art Collector (5-2), one of four Grade 1 winners in the race, assumed the early lead out of the gate. Hot Rod Charlie never was more than a length behind. Happy Saver, who won the 2020 Jockey Club Gold Cup (G1) at Belmont Park, saved ground and stalked in third place. Rich Strike was three wide, laying off the pace in fourth.

As Art Collected retreated, Hot Rod Charlie stayed on, and Rich Strike started picking off horses. Hot Rod Charlie’s finished the first mile of the nine-furlong race at 1:37.01, but Rich Strike was about to catch him on the outside.

“I wish we’d been inside of him,” Rich Strike’s owner Rick Dawson said. “All day long, even though the outside horse passes, the inside horse has been able to catch back up. It’s a little hotter in there. Obviously we couldn’t get there.”

The mere presence of Rich Strike brushing him appeared to awaken Hot Rod Charlie just in the nick of time.

“His ears just went forward, and he just kind of put on the brakes,” Gaffalione said. “I needed somebody to push him along. When that horse came up to him, that was exactly what we needed.”

That and a tack problem on that closest rival.

Saddle trouble. A late lead. A moral victory. Rich Strike’s connections looked happy that their horse was vindicated for the second race in a row. But they were smiling through some heartbreaking pain, too.

“I still wish I could hold that trophy,” Reed said.

Before the race Reed said it would take a win or a strong showing to convince him to send Rich Strike to the Breeders’ Cup Classic at Keeneland.

Breeders’ Cup, Clark or none of the above, Reed said Rich Strike proved himself worthy of being in the conversation with his peers. The “F” word, fluke, need not be there anymore. Especially since this was a first-time test against older horses.

“It’s like guarding Michael Jordan in your first game,” Reed said. “He guarded him well, but Jordan found a way to hit that three at the buzzer and beat him.”