Hot Rod Charlie gets his Grade 1 in the Pennsylvania Derby 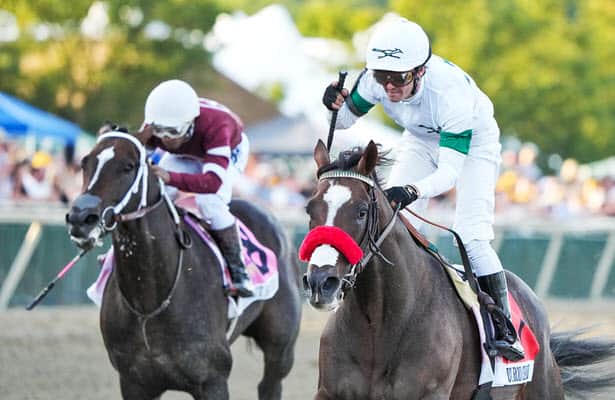 After a string of near misses at the Grade 1 level, Hot Rod Charlie finally broke through at the sport's highest level when prevailing as the favorite in the Grade 1, $1 million Pennsylvania Derby at Parx Racing on Saturday.

Click here for Parx Racing entries and results
In four previous Grade 1 tries, Hot Rod Charlie was disqualified from the win in the Haskell in July, was second to champion Essential Quality in the Belmont Stakes in June, was beaten just a length by Mandaloun when third in the Kentucky Derby this spring, and in last year's Breeders' Cup Juvenile, was edged three-quarters of a length by Essential Quality.

But on Saturday, Hot Rod Charlie and Flavien Prat went straight to the lead and were quickly flanked on the outside by second-choice Midnight Bourbon through opening fractions of 23:4, 47.0 and 1:10.6 for the opening six furlongs.

As they turned into the stretch, Hot Rod Charlie drifted out and appeared to bump Midnight Bourbon on his outside. After the incident, both were set down for the drive and it was Hot Rod Charlie who kicked clear to win by 2 1/4 lengths.

"Charlie is a rock star," winning trainer Doug O'Neill said. "I’m just a roadie but I am a pumped roadie, that’s for sure.”

“I could tell Charlie did not corner as well as he could. But it didn’t seem like he affected (Midnight) Bourbon at all, thank God," O'Neill said. "He seemed like he was clear. Flavien had mentioned maybe putting a set of cheaters on him again. He said he got a little distracted being on the lead, kind of looking around, and that might have caused him not to corner as well as he could have."

Prat told the Parx publicity team, "I was under control the whole race.

O'Neill also added his thoughts on the incident.

"This one did not seem as dramatic as the (Haskell)," O'Neill said. "For this to come on top of his last race, this was definitely exaggerated and had a long inquiry as well. Thank God he was clear and didn’t cause any interference. I was pretty confident they were not going to take him down.”

Midnight Bourbon trainer Steve Asmussen had his own opinion on the race.

Midnight Bourbon was followed across the wire by Americanrevolution in third with Fulsome completing the superfecta.

"It’s so big," O'Neill said of Hot Rod Charlie's first Grade 1 win. "It still hasn’t sunk in. He has had so many hard fought races and to not have a Grade 1 on his resume seemed so unfortunate for a horse as good as he is. It’s good to finally get it."