Horses to Watch: 10 entries to follow at Gulfstream, Oaklawn 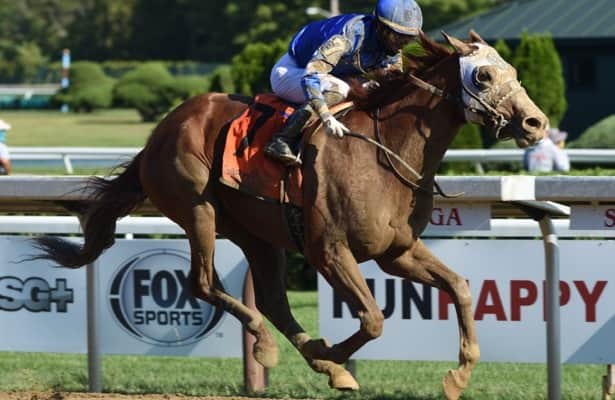 A Triple Crown nominee trained by Bill Mott, Annex turned in a terrific effort to win his debut racing a mile over the Gulfstream turf course last month. After dropping well off the early pace, Annex roared through the final two furlongs in 11.69 and 11.17 to win going away by a length.

Annex did race a bit greenly down the stretch, but he was also full of run and appeared to be just getting going. If he improves at all in his second start (a strong possibility since Mott wins a solid 18-percent rate with last-out maiden winners), Annex will be tough to beat in Saturday’s sixth race at Gulfstream Park, the $100,000 Palm Beach Stakes (post time 1:53 p.m. EST). The field did not come up very tough on paper, so Annex’s strong turn-of-foot can carry him to the winner’s circle.

Although the son of Declaration of War is bred top and bottom to thrive on turf, he did nab the With Anticipation Stakes over a sloppy main track at Saratoga last summer. Fire At Will is clearly a talented prospect – he trounced a deep international field by three lengths in the Breeders’ Cup – and class alone might land him a strong finish in the Fountain of Youth. But we will not judge too harshly if Fire At Will falters. He can always return to turf and take aim at rich races like the $1 million Belmont Derby Invitational (G1).

Fresh off an eye-catching 5 3/4-length romp in the Holy Bull (G3), Greatest Honour will stick to the same track and distance while squaring off against Fire At Will in the Fountain of Youth.

A rapidly improving son of Tapit, Greatest Honour is a deep closer with enough tactical speed to get involved around the far turn, rather than wait for the homestretch drive. This versatility allows Greatest Honour to control his own fate and avoid relying on the pacesetters to establish a quick tempo, so all signs suggest Greatest Honour will be formidable again Saturday.

Hunka Burning Love has been a winning machine for trainer Karl Broberg, rattling off victories in eight of his last 11 starts. And though he was beaten in the Fifth Season Stakes at Oaklawn last month, Hunka Burning Love certainly ran a winning race in defeat, going down by a nose while conceding the winner seven pounds.

A speed horse thoroughly comfortable setting the pace, Hunka Burning Love looms as the lone front-runner in Saturday’s seventh race at Oaklawn Park, the $600,000 Razorback Handicap (G3, 4:20 p.m. EST). If he shakes loose on an uncontested lead, he will be tough to run down.

He might not be a lock to win, but I’m curious to see how Known Agenda performs in Friday’s fourth race at Gulfstream, a 1 1/8-mile allowance optional claiming race (post time 2:37 p.m. EST). The son of Curlin has shown flashes of talent for trainer Todd Pletcher, but he’s also raced greenly, seemingly refusing at times to deliver his best effort.

Case in point? Check out Known Agenda’s effort in the Sam F. Davis (G3) at Tampa Bay Downs. After showing very little interest for much of the race, Known Agenda suddenly came alive late on the far turn, and through the final furlong he gained a staggering 8 3/4 lengths to finish fifth.

A fast early/slow late race shape contributed to Known Agenda’s late rally, but I do not think it was entirely responsible. I believe Known Agenda could have gotten going sooner, but for whatever reason refused to engage until it was too late. Perhaps the addition of blinkers for Friday’s allowance race will sharpen Known Agenda’s focus and get him into the race sooner. Do not forget, Known Agenda defeated Greatest Honour and Withers (G3) runner-up Overtook in a 1 1/8-mile maiden race Aqueduct last fall, so the talent is certainly there.

If anyone can catch Hunka Burning Love in the Razorback, it is surely Mystic Guide. A beautifully bred Godolphin runner, Mystic Guide showed steady improvement as a sophomore last year, ending the season with a victory in the Jim Dandy (G2) and a runner-up effort in the Jockey Club Gold Cup (G1).

Mystic Guide has trained strongly for his 4-year-old debut and is bred to improve with maturity, so he should produce a big effort even while returning from a layoff. I am excited to see what Mystic Guide can accomplish in 2021.

Although Prime Factor faded to finish third by 9 1/2 lengths against Greatest Honour in the Fountain of Youth, I think his effort was better than it initially appears. Stepping up sharply in class and distance after dominating his sprint debut, Prime Factor raced close to a solid pace before giving way in the final furlong.

Prime Factor is bred for stamina and is eligible to improve in his second start running long, so do not write off this Pletcher trainee just yet. Hot jockey Irad Ortiz Jr. retains the mount, and a big step forward could be in the offing.

Tobys Heart displayed a world of potential in a pair of turf sprints last season, unleashing explosive rallies to win her debut at Churchill Downs and the Bolton Landing Stakes at Saratoga. In the latter race, Tobys Heart swallowed up no fewer than five future stakes winners, including four next-out stakes winners.

Tobys Heart hasn’t run since August, but she’s been training steadily for her return in Saturday’s third race at Gulfstream Park, the $100,000 Herecomesthebride (G3, post time 12:26 p.m. ET). Stretching out from 5 1/2 furlongs to 1 1/16 miles is a big question mark, but on talent alone, Tobys Heart warrants respect. Even if she falters, she can always cut back in distance and tear up turf sprints this year.

Two starts, two victories. War Like Goddess showed a ton of talent running long on turf last fall for Mott, unleashing powerful rallies to win maiden and allowance races at Churchill Downs. The daughter of English Channel was particularly impressive in her allowance win racing 1 3/8 miles, finishing fast into pedestrian fractions of :25.55, :52.95, and 1:20.69 to romp by 3 1/4 lengths.

I expect War Like Goddess to be formidable in Saturday’s 13th race at Gulfstream, the $125,000 The Very One Stakes (G3, post time 5:36 p.m. ET). Racing 1 3/16 miles should be right up her alley, and there ought to be at least a little more pace to enhance her rally. I won’t be shocked if War Like Goddess develops into a Grade 1 winner this season, with the The Very One serving as the perfect starting point.

Multiple Grade 1 winner Got Stormy might be the most accomplished mare entered in Saturday’s 11th race at Gulfstream, the $125,000 Honey Fox (G3, post time 4:29 p.m. EST), but Zofelle looks like the “now” horse. Whereas Got Stormy seems best running shorter than a mile these days, Zofelle thrived over a mile at Gulfstream last month, unleashing an eye-catching rally to win the Marshua’s River (G2) by two widening lengths.

Zofelle has long shown talent, but the Marshua’s River – her first start off a seven-month layoff – was clearly her best effort to date. The five-year-old mare looks poised for a big season and picks up Ortiz, stamping Zofelle as the runner to beat.

Saturday Plays: Justify sibling playable in double with Soaring Softly
Siblings of famous horses do not present a good be...