Horses to Watch: 6 worth your attention, 1 to drop 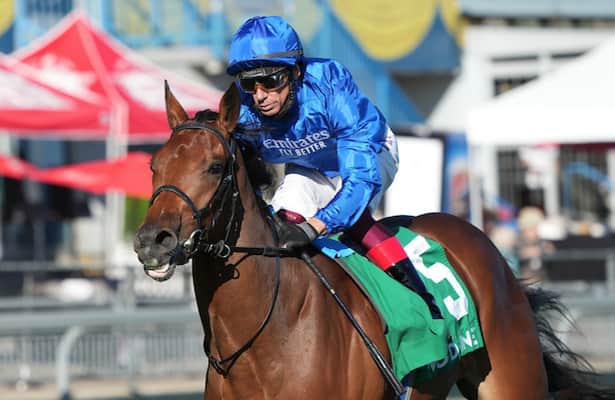 A Godolphin homebred trained by Charlie Appleby, Wild Beauty fired off a huge effort in the Natalma (G1) at Woodbine Sunday. A troubled start left the daughter of Frankel racing in last place early on, but after making mid-race progress to reach contention, she was full of run down the homestretch. Rallying wide under jockey Frankie Dettori, Wild Beauty dashed the penultimate furlong in about 11.46 seconds and the final furlong in 11.97 seconds to pull away and win by a confident 2 1/4 lengths.

Notably, Wild Beauty’s final time of 1:35.08 seconds was significantly faster than the 1:35.77 clocking posted by males in the Summer (G1) on the same afternoon. The Breeders’ Cup Juvenile Fillies Turf is next on the agenda for Wild Beauty, and while the tight-turning course at Del Mar is a far cry from the sweeping conditions at Woodbine, Wild Beauty’s talent might be enough to overcome the trickier course.

Did you happen to see Yuugiri’s powerful debut victory on Friday at Churchill Downs? The daughter of Shackleford was disregarded at 9-1 in a six-furlong maiden special weight sprint for juvenile fillies, but she left no doubt about her superiority down the homestretch.

Indeed, after settling in second place through a blazing opening quarter mile in 21.32 seconds, Yuugiri pounced to the front through a half mile in 44.91 seconds and pulled away easily down the lane to dominate by 7 1/4 lengths. Her final time of 1:09.55 seconds was quick, and Yuugiri’s pedigree hints that longer distances are within reach, stamping the Rodolphe Brisset trainee as a potential Road to the Kentucky Oaks candidate.

Another promising juvenile trained by Brisset, Great Escape took a nice step forward in his second career start. Favored to win a seven-furlong maiden special weight on Saturday at Churchill Downs, the son of Midnight Storm settled a couple lengths behind fractions of 22.37 and 45.72 seconds, then rallied wide to draw off and win by 2 1/4 lengths.

Great Escape reached the finish line in a respectable 1:22.75 seconds and looks like a bright prospect for owners WinStar Farm and Siena Farm.

A favorable pace scenario made all the difference for Sconsin in the Open Mind at Churchill Downs. After settling in fourth place before fractions of 21.64 and 44.77 seconds, the daughter of Include rallied to the lead and held off a challenge from heavy favorite Bell’s the One to win the six-furlong sprint by half a length in 1:08.75 seconds.

It's Sconsin with a dogged win over Bell's the One in the Open Mind Stakes from @ChurchillDowns with @Tyler_Gaff up for @Foley_Racing.

Sconsin’s victory marked a nice rebound from her fourth-place finish in a slow-paced renewal of the Ballerina Handicap (G1) at Saratoga. The 4-year-old filly remains a viable contender for the Breeders’ Cup Filly & Mare Sprint, where she seems certain to encounter another favorable setup.

It’s hard to knock the effort Pizza Bianca produced against Wild Beauty in the Natalma. After saving ground in fifth place, the Christophe Clement trainee lacked racing room around the turn and had to wait behind rivals at a key moment. Even in the homestretch, Pizza Bianca had to battle through traffic to secure a clear path, so the fact she ultimately got through and stayed on gamely to finish just 2 1/4 lengths behind the winner is encouraging. I am optimistic we haven’t seen Pizza Bianca’s best yet.

Failed to fire his best shot when finishing seventh as the favorite in the Woodbine Mile (G1) at Woodbine, though there were extenuating circumstances. Set Piece trailed early through unremarkable fractions of 24.08, 47.10 and 1:10.41 seconds, which gave an advantage to front-running winner Town Cruise. Furthermore, Set Piece lacked racing room down the homestretch and might have finished closer with a clear run. I think he will win another stakes – perhaps against easier company – before the year is over.

Had every opportunity to win the Iroquois (G3) at Churchill Downs and led past the quarter pole, but he weakened in the drive to finish fifth by three lengths. The race came back a bit slow on paper, so I will drop Stellar Tap from my watch list and wait for him to bounce back with a stronger effort before playing him again.