Horses to Watch: Triple Tap was more impressive than you think 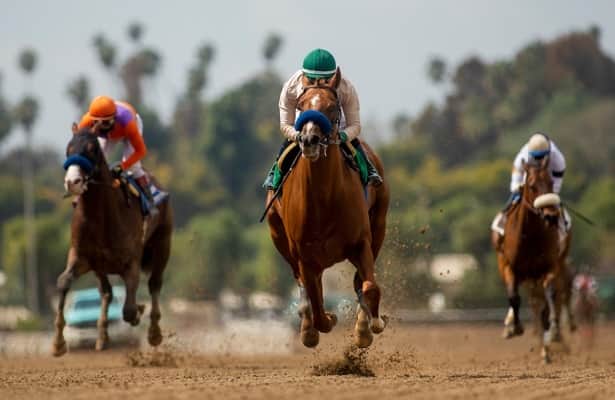 I’ll be the first to admit there’s nothing creative about adding Triple Tap to my watch list off his debut victory. Everyone — including me — had already climbed on the bandwagon thanks to Triple Tap’s flashy workouts and illustrious pedigree. (He is a half-brother to Triple Crown winner American Pharoah.)

But the reason I’m adding Triple Tap to my watch list is that I believe there’s more to this colt than meets the eye. Some will point out that his winning time (1:23.12) and margin of victory (4 1/4 lengths) were unremarkable, considering the track was playing a bit quicker than usual and the competition was modest.

But I loved the visual impression Triple Tap made on Saturday. He was professional throughout, breaking alertly and casually pressing the pace before switching leads on cue at the top of the stretch. Down the lane he ran straight and true, and when jockey Flavien Prat started hand-urging him more aggressively in the final furlong, Triple Tap hit another gear and flew home in :12.15.

As a son of three-time leading sire Tapit, who tends to pass stamina on to his progeny, Triple Tap should only improve when stretching out around two turns. I’m excited to see what the future holds for this beautifully bred Triple Crown nominee — he looks like a special colt.

It’s safe to say Concert Tour was tons the best in Saturday’s Rebel (G2) at Oaklawn Park. The undefeated Bob Baffert trainee employed aggressive tactics, beating pure front-runner Caddo River to the lead before settling down through splits of :23.42, :47.53, and 1:12.00. Thereafter, Concert Tour never had to try his hardest — down the lane, he pulled away under virtually no urging at all to defeat stablemate Hozier by 4 1/4 lengths.

Concert Tour didn’t run overly fast on the clock, completing the 1 1/16-mile race in 1:43.18. But he appeared to have plenty left in the tank and looks like a clear favorite to win the Arkansas Derby (G1) at Oaklawn next month.

The outcome wasn’t a given down the lane. After rating near the back of the pack behind fractions of :23.57, :46.67, and 1:12.22, Silver State advanced to take command early in the homestretch. But Silver State was closely pursued by fellow closer Rated R Superstar, and through a rapid final 16th in :06.16, Silver State did just enough to score by a neck in 1:42.73.

It remains to be seen whether Silver State can step up his game and prevail against graded stakes company, but he’s proven effective both sprinting and routing, opening the door for a productive spring and summer campaign.

Although As Time Goes By was no match for Preakness winner Swiss Skydiver in the Beholder Mile (G1) at Santa Anita, the Bob Baffert-trained filly nevertheless fired off a big effort in her stakes debut. Rallying nicely from fifth place, As Time Goes By closed ground steadily down the homestretch to finish clearly second best, beaten just 2 3/4 lengths by the 7-5 favorite. Against easier competition next time, As Time Goes By can secure a graded win of her own.

The 2020 Zenyatta (G2) winner faltered in her 4-year-old debut, weakening from a tracking position to finish fourth by seven lengths in the Beholder Mile. But since her form last season was so strong, I’ll draw a line through this disappointing effort and assume she needed the race.

Came up short when beaten to the lead in the Rebel, faltering down the homestretch to finished fifth by 6 3/4 lengths. The speedy Smarty Jones Stakes winner might be a need-the-lead type unable to fire his best effort when challenged for early supremacy.