Horses to Watch: Volatile’s win was even better than it appeared 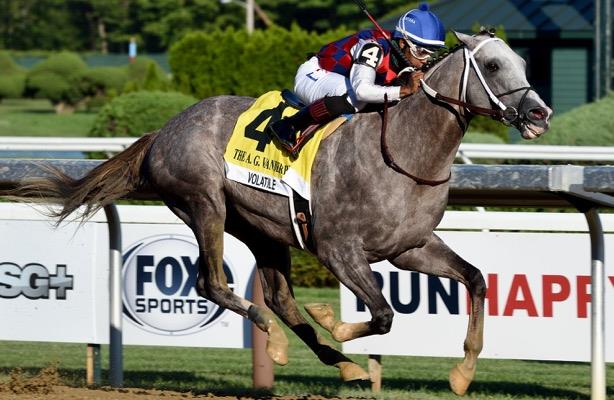 In this biweekly series, racing analyst Keeler Johnson shares promising horses from his handicapping watch list, reviews runners who have recently caught his eye and previews horses scheduled to run back in the near future.

A son of 2010 Kentucky Derby (G1) winner Super Saver, Happy Saver brought his career record to a perfect 2-for-2 with an eye-catching allowance victory on Sunday at Saratoga.

Trained by Todd Pletcher, Happy Saver was similarly dominant in a 7-furlong maiden dash at Belmont last month, scoring by 5 1/2 lengths in 1:21.51. The Sept. 5 Jim Dandy (G2) could be next on the agenda for this promising sophomore.

Could Rombauer be a future stakes winner in the making? He certainly looked like one when rallying to victory in a 1-mile maiden race on Saturday at Del Mar. The unraced son of Twirling Candy was dismissed by bettors at 16-1, but after settling in seventh place behind slow fractions of :23.75, :49.61, and 1:14.50, Rombauer rallied furiously down the homestretch, sprinting the final quarter in about :23 flat to beat the pace-tracking Dyn O Mite by half a length.

Trained by Michael McCarthy, Rombauer made a great visual impression as well. He had to shift out for racing room at the top of the stretch and even checked briefly when a rival drifted out, but down the lane he was full of run and seemingly just getting started. One has to assume Rombauer will be a live contender for the Sept. 7 Del Mar Juvenile Turf Stakes over the same course and distance as his maiden triumph.

After effortlessly winning his debut sprinting 7 furlongs over the Woodbine turf course, Shirl’s Speight showed no hesitation switching to the Woodbine Tapeta and stretching out in distance for Saturday’s Marine Stakes (G3). Favored at just over even money in the 1 1/16-mile event, Shirl’s Speight casually tracked the pace before seizing command and sprinting the final 5/16 in :31.08 to score by 2 3/4 lengths under a hand ride.

Having gone undefeated and unchallenged in his first two starts, there’s no telling how good this Roger Attfield trainee might be. Keep in mind, Shirl’s Speight was nominated to the Triple Crown before he’d run a single race, and while he’s probably come to hand too late to take aim at the Kentucky Derby, a run in the Oct. 7 Preakness (G1) could still be an option for this Charles Fipke homebred.

While it wasn’t as visually jaw-dropping as his victory in the Aristides, Volatile’s triumph in the Alfred G. Vanderbilt Handicap (G1) on Saturday at Saratoga was stronger than it appeared at first glance. Facing just three rivals, Volatile was able to escape with setting pedestrian early fractions of :23.46 and :46.67 — about as slow as you’ll ever see in a Grade 1 sprint. But the son of Violence accelerated sharply down the homestretch, sprinting the fifth furlong in :11.33 and the final furlong in :11.61 to win comfortably by 1 1/4 lengths with a 102 Beyer speed figure.

Breaking down the pace fractions, Volatile ran the three quarter-mile splits in :23.46, :23.21, and :22.94, which means he actually accelerated from start to finish—a rarity in any race and especially unusual for a sprint. The fact Volatile was running fastest at the finish suggests he could have recorded a faster final time (and perhaps a larger margin of victory) with a more productive rationing of his abundant speed. The slow pace really didn’t do him any favors—it just gave his pursuers an opportunity to stay in striking range down the homestretch.

The good news is, Volatile didn’t have to work very hard to win the Vanderbilt. The slow early/fast late race shape is unlikely to have taken much out of him. In short, Volatile enjoyed an easy time securing his first Grade 1 win and should be capable of producing even better efforts down the road.

This Ian Wilkes trainee was favored at 3-5 to win a 1-mile maiden race on Sunday at Ellis Park, but after racing a bit rankly in tight quarters during the early going, she rallied only mildly to finish second behind runaway winner Dream Quist.

It was a decent effort from the 2-year-old daughter of Into Mischief, and it’s possible she’ll graduate next time out. But Bahama Mischief failed to take the step forward I anticipated in her second career start, so for the time being I’ll remove her from my watch list.

Broke slowly, raced rankly, and faded to finish last behind Happy Saver on Sunday at Saratoga, his first start around two turns and his first run against winners. This stoutly bred son of Lemon Drop Kid clearly regressed off his impressive maiden win at Gulfstream and wasn’t persevered with down the homestretch, so I’ll wait to see how he bounces back before playing him again.

Owned by Someday Farm and trained by John Servis — the same team behind 2004 Kentucky Derby winner Smarty Jones — Dreams Untold is a son of Smarty Jones himself, and all signs suggest this chestnut gelding might be something special.

Dreams Untold is 2-for-4 so far, yet it was a fifth-place effort in the 1-mile Miracle Wood Stakes that arguably gave the best indication of his talent. A disastrous stumble at the start left Dreams Untold far behind the early pace, yet he somehow unleashed a huge mid-race move to reach contention before understandably weakening in the homestretch.

Dreams Untold recently returned from a layoff to win a 6-furlong allowance race at Delaware Park, stamping him as the 8-5 morning line favorite to win Tuesday’s sixth race at Parx Racing (post time 3:10 p.m. ET). Should Dreams Untold prevail as expected in this 6 1/2-furlong allowance event, a return to stakes company figures to be next on the agenda.