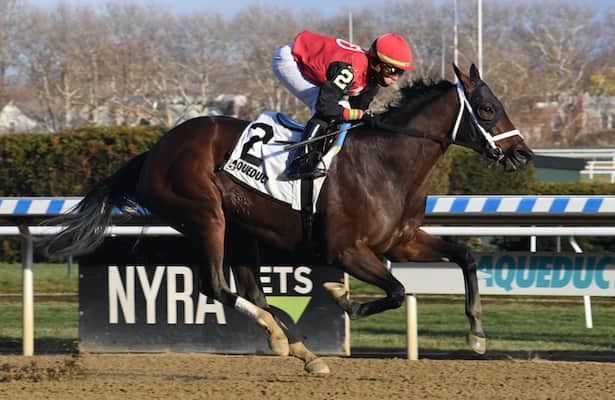 It’s safe to say Lady Rocket has gotten really, really good over the last few months. Victorious in four of her last five starts, the Brad Cox trainee elevated her game to a new level in the Go for Wand Handicap (G3) racing one mile at Aqueduct, smashing her opponents by nine lengths.

Everything about Lady Rocket’s performance was impressive, from the way she set quick fractions of 23.22 and 46.54 seconds to the way she reached the finish line eased up in 1:36.52 seconds. This was a rapid clocking over a slow track – in fact, Lady Rocket’s time would have beaten males in the Cigar Mile (G1) contested on the same afternoon, considering the latter race elapsed in 1:36.68 seconds.

Lady Rocket’s connections have indicated she is bound for Grade 1 company in 2022, and if she keeps improving – or even just maintains her current level of form – I think she will nab a top-level prize before long.

A stoutly bred son of Uncle Mo out of a Pulpit mare, Mo Donegal unleashed a deceptively strong performance to win the Remsen (G2) at Aqueduct. After settling in midfield behind pedestrian fractions of 25.18, 51.47 and 1:16.34 seconds, Mo Donegal shifted outside and finished fast (sprinting the final three furlongs in about 37 seconds flat) to beat game runner-up Zandon by a nose.

Mo Donegal completed the 1 1/8-mile race in 1:53.61 seconds, significantly faster than Nest (see below) needed to win the Demoiselle (G2) on the same afternoon, even though the Demoiselle unfolded at a quicker pace. Clearly Mo Donegal boasts a serious engine, combining stamina with a strong turn of foot, so I’m excited to see what the Todd Pletcher trainee can accomplish on the Road to the Kentucky Derby.

It appeared as though Eda was going to fall to a short-priced defeat in the Starlet (G1) at Los Alamitos, but the daughter of Munnings proved resilient under pressure. Overtaken in the homestretch by a rallying rival, Eda battled back to win by half a length as the 11-10 favorite, completing the 1 1/16-mile race in 1:44.51 seconds.

Another winner by Munnings @coolmorestud

Race 9 at Los Al is up next & it is a Money Back Special Race! pic.twitter.com/J921RoxHOI

Previously victorious in multiple sprint stakes, Eda is now proven running two turns, expanding her options for 2022. A productive winter campaign should be in the offing.

Just as her pedigree suggested she would, Nest relished stretching out over 1 1/8 miles in the Demoiselle at Aqueduct. The full sister to Santa Anita Handicap (G1) winner Idol settled in midfield before unleashing a sustained rally down the homestretch to get up and win by a neck in 1:55.07 seconds.

Nest’s final time was not especially quick, but the daughter of Curlin is bred to improve with maturity, and she has Road to the Kentucky Oaks aspirations for trainer Todd Pletcher.

It’s hard to knock the performance Following Sea produced in the Cigar Mile (G1) at Aqueduct. After breaking from the rail and dueling for the lead through fast fractions of 23.19 and 46.04 seconds, Following Sea just barely failed to stem off a challenge from stablemate Americanrevolution, settling for second place by half a length.

Following Sea has placed four times at the Grade 1 level this year, so clearly he is capable of competing against elite competition. He finished 2 1/2 lengths clear of the remaining Cigar Mile contenders and has the Carter Handicap (G1) and Metropolitan Handicap (G1) on his 2022 agenda.

The Breeders’ Cup Dirt Mile runner-up failed to bring his A-game while shipping to Aqueduct for the Cigar Mile, fading to finish sixth after dueling with Following Sea for early command. All of Ginobili’s best efforts this year came at Del Mar, so it is possible he holds a special affinity for California’s seaside oval. If this is true, then we will have to wait until next summer to see Ginobili back at his best.

Suffered a second straight defeat when running third in the Bayakoa (G3) at Los Alamitos. The sophomore filly did not run badly while facing older rivals, rallying wide to finish behind only the graded-stakes winners As Time Goes By and Warren’s Showtime. But Moonlight d’Oro received a favorable fast early/slow late pace setup and still finished 6 1/4 lengths behind the pacesetting winner, so I will want to see Moonlight d’Oro show a bit more next time.