Horses to Watch: Rombauer leads 6 worth your attention 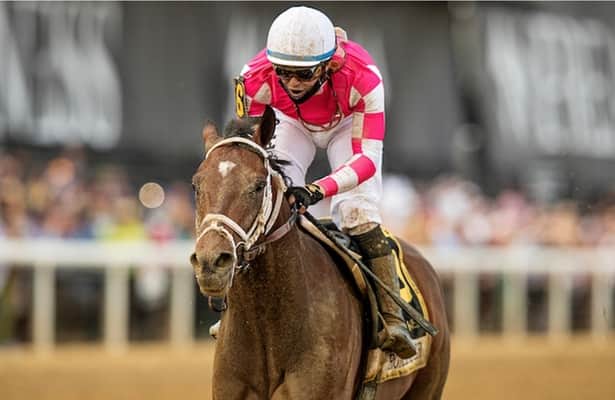 I loved everything about Rombauer’s runaway victory in the Preakness at Pimlico. Just like when finishing third in the Blue Grass (G2), Rombauer displayed more positional speed than in the past, settling just a few lengths off the pace through fractions of :23.77, :46.93, and 1:10.97. He began to advance around the final turn, gaining meaningful ground through a rapid :23.81 fourth quarter mile. Then he turned on the afterburners, finishing legitimately fast down the homestretch to win by 3 1/2 lengths in the excellent time of 1:53.62.

It’s clear that Rombauer has made remarkable progress for trainer Michael McCarthy. The Preakness marked his third start of the year, so there’s still room for Rombauer to keep improving as the season progresses. I featured Rombauer on the Watch List after he won his debut on turf at Del Mar last summer but dropped him following a sixth-place finish in the Del Mar Juvenile Turf Stakes. Clearly, I should have stayed on the bandwagon a bit longer.

Runner-up in her debut over the Keeneland dirt, Wesley Ward’s exciting 2-year-old filly Twilight Gleaming took a huge step forward when switching to turf at Belmont on May 9. Under jockey Irad Ortiz Jr., Twilight Gleaming dashed to the lead through an opening quarter in :22.22, then pulled away through a half mile in :44.82 to win the five-furlong dash by 7 1/2 lengths in :56.49. Best of all, she was never asked for her best run, cruising home under an easy hand ride.

Will she be on the plane to Royal @Ascot? pic.twitter.com/mcNEM4Sp36

As a daughter of National Defense (a Group 1 winner in France) out of a Dansili mare, Twilight Gleaming is bred top and bottom to thrive on grass, as her maiden victory vividly illustrates. A stop at Royal Ascot could be next on the agenda.

Favored at 1-20 in a one-mile allowance race on Friday at Belmont Park, Stage Raider delivered a sharp victory. Racing much more professionally than in his maiden win at Keeneland, Stage Raider settled a few lengths behind early fractions of :23.53 and :47.04, then gamely squeezed through a narrow opening along the rail to take command and score by three lengths under a hand ride.

Stage Raider’s final time of 1:38.22 was modest, but the way he overcame a tricky trip to win decisively was eye-catching. A half-brother to 2018 Triple Crown winner Justify, Stage Raider likely still has upside for trainer Chad Brown.

Great Island wasn’t supposed to factor in Pimlico’s Gallorette (G3) – bettors dismissed her as an 8-1 long shot in a five-horse field. But even after dropping back to last place through slow fractions of :25.27 and :50.92, Great Island managed to produce a meaningful outside rally through fast finishing splits, finishing third by 1 1/2 lengths. I’ll give the daughter of Scat Daddy at least one more try.

Laurel River was far from disgraced in his stakes debut. Sprinting 6 1/2 furlongs in the Lazaro Barrera (G3) at Santa Anita, the Bob Baffert trainee dashed to the front through blazing splits of :21.32 and :44.29 but grew a bit leg-weary down the homestretch and settled for second behind the deep-closing 3-5 favorite The Chosen Vron. Laurel River finished 10 lengths clear of the rest and can bounce back with a more relaxed journey next time. Stretching out in distance might help the son of Into Mischief, who was produced by an Empire Maker mare.

Although Tobys Heart finished fifth in the Soaring Softly (G3) at Belmont, she was beaten only 1 1/2 lengths while rallying into relatively unremarkable early fractions of :22.61 and :45.62. Perhaps stretching out over seven furlongs dulled Tobys Heart’s turn-of-foot – she’s 3-for-3 sprinting 5 1/2 furlongs, so I’m optimistic she’ll rebound if she cuts back in trip next time.

Enjoyed an advantageous trip stalking a slow pace in the Gallorette but failed to kick on as expected down the homestretch, weakening to finish fourth by three lengths. Despite the slow early/fast late race shape, Flighty Lady finished behind a pair of deep closers. I’ll want to see a stronger finish next time before returning Flighty Lady to my watch list.

I had hoped to see Japan’s Hyacinth Stakes winner La Perouse make a trip to the U.S. for the Kentucky Derby or Belmont, but it appears the Triple Crown nominee has taken a different route. After spending three months on the sidelines, La Perouse returned to action in the Seiryu Stakes on Sunday at Tokyo Racecourse but failed to bring his A-game and finished 11th. Without a trip to the U.S. on the immediate horizon, we’ll drop La Perouse from our watch list.

An action-packed campaign seemed to catch up to Medina Spirit in the Preakness. Making his sixth graded stakes start in 4 1/2 months, Medina Spirit secured the early lead an expected, but weakened off splits of :23.77, :46.93, and 1:10.97 to finish third by 5 1/2 lengths. We had a nice run with Medina Spirit, but I’ll want to see how he bounces back from his tough winter/spring campaign before returning him to my watch list.