Horses to Watch: Notable names return from layoffs at Belmont 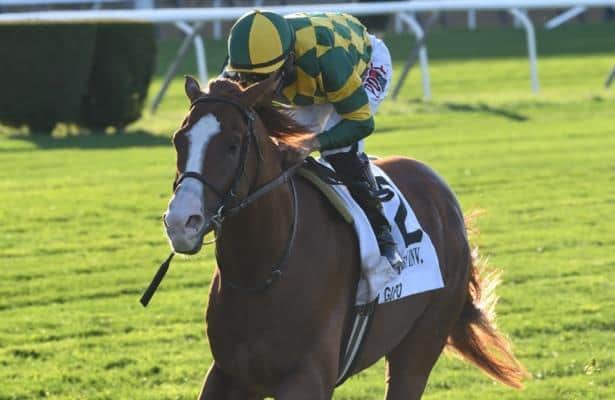 Domestic Spending and Smooth Like Strait got the better of Gufo by a neck in the 1 1/8-mile Hollywood Derby (G1) last fall, but Gufo ran an admirable race in defeat, gaining 4 1/4 lengths through an 11.36-second final furlong to fall just short of catching his rivals. If the timer is to be believed, Gufo ran his own final furlong in less than 11 seconds, a sensational fraction.

Gufo had previously rallied to a comfortable victory in the 1 1/4-mile Belmont Derby (G1) at Belmont Park, so returning to Belmont and stretching out over 1 3/8 miles should not be an obstacle for the son of Declaration of War. Gufo has been training nicely over the turf course at Payson Park, posting a couple of bullet five-furlong breezes in recent weeks, and he figures to give 2019 Irish Derby (G1) winner Sovereign a stiff challenge in the Man o’ War.

Harvey’s Lil Goil ranked among the most accomplished 3-year-old turf fillies in training last year, packing victories in the Queen Elizabeth II Challenge Cup (G1) and Regret (G3) among neck defeats in the Breeders’ Cup Filly & Mare Turf and Dueling Grounds Oaks. The daughter of American Pharoah will kick off her four-year-old campaign in Saturday’s sixth race at Belmont Park, the $150,000 Beaugay (G3, post time 3:34 p.m. EDT), which could mark the start of another big season.

Victory might not be a shoo-in for Harvey’s Lil Goil. After all, she is squaring off against Flower Bowl (G1) winner Civil Union and the high-class Lemista, a multiple group stakes winner from Ireland making her U.S. debut for trainer Chad Brown. But the 1 1/16-mile distance of the Beaugay should suit Harvey’s Lil Goil just fine, and she has put together nine workouts in preparation for this race. It is hard to knock her chances.

At long last, he is back. A son of Ghostzapper out of the Dynaformer mare Dynaire, Wolfie’s Dynaghost is bred top and bottom to improve with maturity and excel running long. And yet, Wolfie’s Dynaghost was ready to roll in his debut sprinting seven furlongs as a juvenile last November, tracking the pace before edging clear to win a maiden special weight at Aqueduct by 1 1/2 lengths. Among his beaten rivals were future Gotham (G3) winner Weyburn, Lexington (G3) runner-up Unbridled Honor, Federico Tesio Stakes winner The Reds, and Wood Memorial (G2) runner-up Dynamic One.

Wolfie’s Dynaghost spent some time on the sidelines following his impressive debut victory, but the Tom Albertrani trainee has cranked out six workouts since March 23 and will make his sophomore debut in Saturday’s ninth race at Belmont Park, the $200,000 Peter Pan Stakes (G3, post time 5:12 p.m. EDT). The field is competitive, but there is not much speed on paper, so Wolfie’s Dynaghost figures to sit a perfect trip setting or stalking a slow pace. I do not know if he will fire his best shot off the layoff, but he is bred to relish 1 1/8 miles, and hot jockey Jose Ortiz picks up the mount. I am excited to see what Wolfie’s Dynaghost can accomplish in the Peter Pan.