Horses to Watch: La Perouse, a Derby contender from Japan 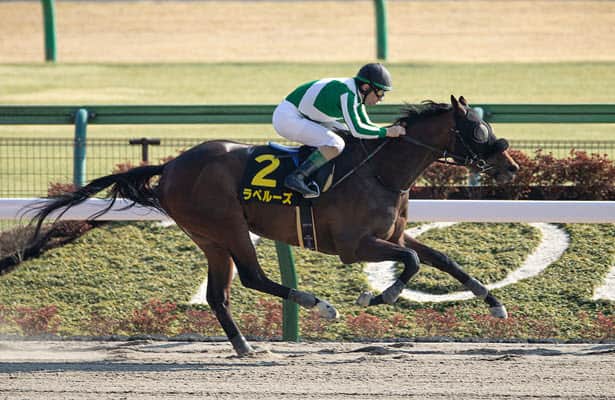 A horse based in Japan has never won the Kentucky Derby; in fact, only three have ever attempted the feat. But if Triple Crown nominee La Perouse makes the trip to Louisville, he might be the one to rewrite the history books. After all, he’s bred top and bottom to relish classic distances on dirt, and his victory in Sunday’s Hyacinth Stakes at Tokyo Racecourse was legitimately impressive.

Under Japan’s leading rider, Christophe Lemaire, La Perouse didn’t get off to the best of starts. But after settling off the pace while saving ground, La Perouse unleashed a furious finish down the long homestretch. Rallying professionally between and inside of runners, La Pelouse dashed the final 600 meters in a rapid :35 to swallow the pacesetter and win going away by 1 1/2 lengths.

I believe La Perouse ranks a cut above fellow Japanese dirt star Master Fencer, who outran expectations to finish sixth in the 2019 Kentucky Derby. Depending on how this year’s Derby field comes together, I wouldn’t count La Perouse out of the mix for victory. Japanese dirt runners have been increasingly competitive on the international stage in recent years (victories by Pink Kamehameha and Copano Kicking on Saudi Cup Day come to mind), and La Perouse clearly possesses a strong turn of foot. He could surprise with a very big effort on the first Saturday in May.

The five-year-old mare Eres Tu really ran too good to lose in Saturday’s Royal Delta (G3) at Gulfstream Park. Although she finished second by 1 3/4 lengths, I believe Eres Tu ran every bit as well as the winner — maybe even better.

Coming off a two-month freshening, Eres Tu arguably moved too soon into a hot pace. After rating in fourth place through a quick half-mile in :46.48, Eres Tu unleashed an eye-catching burst of acceleration around the final turn, sweeping past rivals with a wide rally to seize command approaching the top of the stretch.

In the meantime, eventual winner Queen Nekia was saving ground farther off the pace, waiting to strike until the final drive. Under a perfect ride, Queen Nekia slipped inside of Eres Tu and forged clear through the final furlong. Considering Eres Tu ran 24 feet (three lengths) farther than Queen Nekia, I think it’s safe to conclude Eres Tu would have won with a more patient or ground-saving trip.

Regardless, the Royal Delta was another step in the right direction for Eres Tu, an improving daughter of Malibu Moon who capped off a perfect 2020 campaign with a victory in the Allaire DuPont (G3). I suspect Eres Tu will win her fair share of races this year.

Any way you slice it, Charlatan ran a big race when stretching out over 1 1/8 miles in the $20 million Saudi Cup on Saturday at Riyadh. Racing aggressively to the front, Charlatan dueled the speedy Pegasus World Cup (G1) winner Knicks Go into submission, took command turning for home, and dug deep when challenged down the lane by eventual winner Mishriff.

In the end, Charlatan didn’t quite see out the distance, settling for second by a length while Mishriff capitalized on a perfect setup and forged clear. It’s possible Charlatan was compromised by drifting toward the rail down the stretch; it seemed as though the outside of the dirt track may have been best on Saturday. But regardless, it’s hard to knock Charlatan’s effort, and I think we’ll see him bounce back to the winner’s circle next time.

We had a nice run with Knicks Go, who rattled off impressive victories in the Breeders’ Cup Dirt Mile (G1) and Pegasus World Cup (G1) while part of our watch list. But the son of Paynter seemed a bit flat in the Saudi Cup, failing to make the early lead before weakening down the stretch to finish fourth.

Maybe Knicks Go is a need-the-lead type who doesn’t run as well when forced to adopt rating tactics. Maybe he regressed while running back four weeks after a hard effort in the Pegasus World Cup. Or maybe he was compromised by racing over a potentially slower part of the track. Knicks Go certainly could return to the winner’s circle next time, but I’ll want to watch his next run (and gauge how he’s bounced back) before returning him to my watch list.