Horses to Watch: Is Mundaye Call a champion in the making? 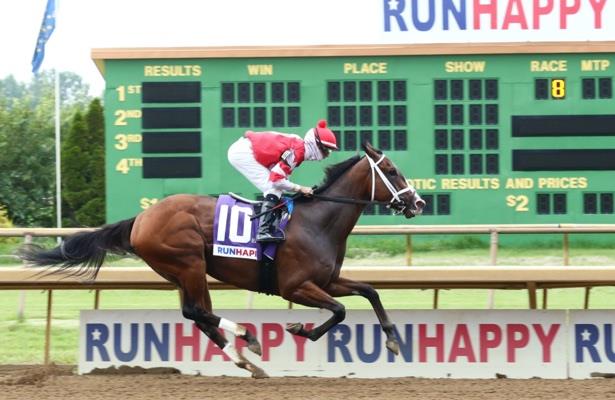 Sold for $250,000 as a yearling, Crazy Beautiful has shown a ton of potential for trainer Kenny McPeek. The 2-year-old daughter of Liam’s Map dominated her debut going a mile on turf at Ellis Park, then successfully switched to dirt and cut back to 7 furlongs for Sunday’s Debutante Stakes at Ellis.

#4 Crazy Beautiful (5/2) slides up the rail to take the Debutabte Stakes at Ellis Park pic.twitter.com/vCOSbipYNK

Rallying strongly from ninth place, Crazy Beautiful split horses at the top of the stretch, dived to the rail, and pulled clear through a :12.50 final furlong to crush 11 rivals by 3 3/4 lengths. With her obvious talent and established versatility, there’s no telling how good this gray filly might turn out to be.

Serengeti Empress is receiving plenty of accolades for her front-running victory in Saturday’s Ballerina (G1) at Saratoga, and deservedly so. But I believe Letruska ran deceptively well while finishing fifth in a deep and competitive field.

A two-time Group 1 winner in Mexico, Letruska has done her best running going a mile or further and entered the Ballerina off a decisive front-running victory in Gulfstream Park’s 1-mile Added Elegance Stakes. But despite pressing Serengeti Empress through blazing fractions of :21.75 and :43.74, Letruska weakened only mildly down the homestretch, finishing just 6 1/2 lengths behind Serengeti Empress and a trio of late runners.

Stretching back out in distance (and encountering a more reserved pace) should send Letruska back to the winner’s circle next time out.

Brad Cox knows a thing or two about training high-class fillies — he’s already conditioned Monomoy Girl, British Idiom and Covfefe to win championship titles. The latest star to emerge from his stable, Mundaye Call, could be bound for similar heights after cruising to an impressive victory in Sunday’s Audubon Oaks at Ellis Park.

Facing 10 rivals, Mundaye Call sprinted to the front from an outside draw and carved out increasingly stiff splits of :22.25, :45.11, and 1:08.92 while leading by at least a length at every call. But these testing fractions did nothing to damper Mundaye Call’s finishing speed, as she widened easily down the stretch under a hand ride from Florent Geroux to win by 7 1/4 lengths.

Mundaye Call reached the finish line in 1:21.17, breaking the track record of 1:21.37 established in 2004. There’s little doubt she could have run faster if asked, stamping Mundaye Call as a talented prospect with a very bright future. Could she be another Cox-trained champion in the making? I wouldn’t count out the possibility.

Todd Pletcher’s promising 2-year-old Mutasaabeq trained like a talented runner leading up to his debut on Saturday at Saratoga, and the son of Into Mischief delivered with a powerful performance. Favored at 85-10, Mutasaabeq pressed the leaders while racing outside through splits of :22.21 and :45.08, then pulled clear with authority to win the 5 1/2-furlong sprint by 4 1/2 lengths in 1:03.55.

#7 Mutasaabeq (4/5) debuts like a good thing in Race 5 from The Spa with Luis Saez up for Todd Pletcher pic.twitter.com/GrNbxDaV3g

This performance produced a solid 85 Beyer speed figure, establishing Mutasaabeq as a contender for Saratoga’s historic Hopeful (G1) at the end of the meet. His pedigree isn’t geared toward success in the classics, but Mutasaabeq certainly has the talent to be a high-level talent at distances up to a mile or so.

Favored at 2-5, Art Collector brought his 2020 record to a perfect 4-for-4 with an easy victory in Sunday’s Ellis Park Derby. In theory, the race should have been a challenge — Art Collector was facing 11 rivals while breaking from an inside post. But the son of Bernardini never gave his challengers a chance to factor, sprinting to the front and carving out splits of :23.33, :46.74, and 1:10.70 before widening with complete authority to win by 3 1/4 lengths in a quick 1:48.02.

Suffice to say, Art Collector has cemented his credentials as a serious contender for the Kentucky Derby. A top-three finish at Churchill Downs — and maybe even a victory — should be well within reach for Art Collector on the first Saturday in September.

A pedestrian pace severely compromised My Sister Nat’s chances in the June 27 New York Stakes (G2) racing 1 1/4 miles, and while the French-bred 5-year-old encountered another slow tempo in Saturday’s Waya Stakes (G3) at Saratoga, stretching out over 1 1/2 miles helped the Chad Brown-trained mare overcome the odds to snatch her first victory in North America.

My Sister Nat had to work hard to wear down the Grade 1-placed favorite Mrs. Sippy, who enjoyed a more favorable trip tracking fractions of :25.46, :50.72, 1:17.34, and 1:41.76. But even though My Sister Nat trailed the leaders by 2 1/2 lengths with a quarter-mile remaining, she managed to produce the winning stretch kick under jockey Jose Ortiz, sprinting home in :23 3/5 to edge Mrs. Sippy by a neck.

My Sister Nat probably isn’t an elite Grade 1 type, but with fair trips traveling 1 1/2 miles, she can win more than her fair share of graded stakes races in the future.

Although he was no match for runaway winner Tiz the Law, Caracaro ran a gutsy race in the Travers (G1) at Saratoga on Saturday, rallying from fifth place to finish clearly second-best. This was a noteworthy step forward off of Caracaro’s runner-up effort in the Peter Pan (G3), his first start off a six-month layoff, so it’s safe to say this late-maturing son of Uncle Mo is progressing in the right direction. Depending on where he turns up next (the Kentucky Derby would be a tough spot), there’s probably a graded stakes race with Caracaro’s name on it somewhere.

Granted, Therideofalifetime was beaten three lengths by Jackie’s Warrior in Friday’s Saratoga Special (G2), but I was nevertheless impressed by his performance. Despite racing wide every step of the way in a quickly run race, Therideofalifetime fought on gamely down the homestretch, pulling four lengths clear of third-place finisher Momos.

As a son of Candy Ride, whose progeny tend to improve with maturity, Therideofalifetime still has plenty of upside and room for improvement. I’m optimistic we haven’t seen his best yet.

After carving out the pace in the Travers, Uncle Chuck surprisingly came up empty on the far turn and weakened down the homestretch to finish sixth of seven, beaten 11 lengths. The son of Uncle Mo clearly regressed off his runaway victory in the Los Alamitos Derby (G3), and while there’s a good chance he’ll rebound in the future — his talent has already been established — I’ll wait to see how he fares next time out before returning Uncle Chuck to my watch list.

This Ian Wilkes-trained filly didn’t fare badly in the Debutante Stakes, rallying late to finish third behind Crazy Beautiful. But the daughter of Speightster didn’t improve as much as I’d hoped in her second career start and was no match for the winner, prompting me to remove Fabricate from my watch list until further notice.