Horses to Watch: 5 worth your time, 1 to drop 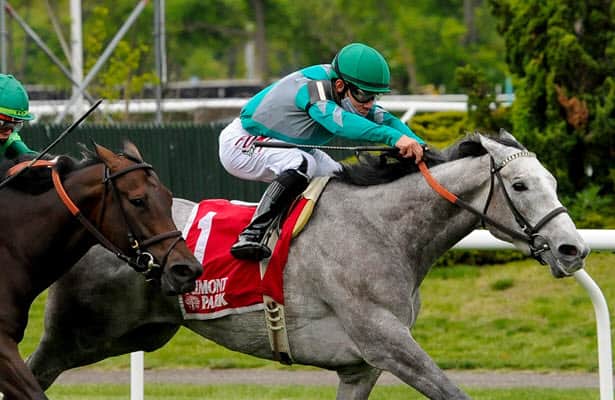 Last year’s Queen Elizabeth II Challenge Cup (G1) winner returned as strong as ever in Saturday’s Beaugay (G3) at Belmont Park. Racing 1 1/16 miles over the turf course, the daughter of American Pharoah put her tactical speed to good use, securing a favorable forward position while tracking pedestrian fractions of :26.00, :50.93, and 1:15.28. Then she accelerated readily when called upon, dashing the final 5/16 in a rapid :28.08 to prevail by half a length.

Conditioned by Hall of Fame trainer Bill Mott, Harvey’s Lil Goil appears poised for another strong season. A race like Belmont’s one-mile Just a Game (G1) on June 5 could be a perfect fit for the speedy 4-year-old.

A 3-year-old son of Honor Code out of a Smart Strike mare, Ethical Judgement has shown flashes of serious talent over the course of four races. The bay colt was particularly impressive in a 1 1/16-mile allowance event at Churchill Downs on Sunday, leading all the way over a sloppy track to win by 3 1/2 lengths.

#10 Ethical Judgement takes 'em all the way for the win in Race 10 from @ChurchillDowns with @Tyler_Gaff up for @brenpwalsh.

Ethical Judgement previously finished second in a Keeneland allowance race behind next-out Oaklawn Stakes winner Fulsome, so it’s safe to say the Brendan Walsh trainee has been keeping good company. Sunday’s race was only Ethical Judgement’s second start of the season, so I’m optimistic he still has more upside.

A multiple group stakes winner in Ireland, Lemista ran a huge race in her U.S. debut for trainer Chad Brown. Facing Harvey’s Lil Goil in the Beaugay, Lemista dropped a few lengths behind the early leaders and was thus compromised by the slow early pace. But her turn-of-foot down the homestretch was terrific, as Lemista sprinted the final 5/16 in :27.85 to fall just half a length short of victory.

With this encouraging stateside debut under her belt, Lemista figures to be a popular play next time out. I think she’ll win a graded stakes sooner rather than later, particularly if she receives a more favorable pace setup.

Any way you slice it, Gufo ran too good to lose in the Man o’ War (G1) at Belmont. Returning from a 5 1/2-month layoff, last year’s Belmont Derby (G1) hero settled more than a dozen lengths off the early pace and was dead last with three furlongs remaining. But Gufo closed ground furiously down the homestretch, coming up a nose short at the finish line after sprinting the final three furlongs in :34.96.

This was an encouraging start to Gufo’s 2021 campaign, and I have to think the 4-year-old son of Declaration of War will nab a Grade 1 win (or two or three) before the year is out.

Although Wolfie’s Dynaghost finished last in the Peter Pan (G3) at Belmont, I won’t judge his performance too harshly. The son of Ghostzapper was returning from a six-month layoff and stepping up sharply in class and distance for his second career start. After carving out a slow pace, he simply ran out of the gas and gave way down the homestretch.

As a half-brother to the Grade 1-winning turf router Sadler’s Joy, I believe Wolfie’s Dynaghost might ultimately prove best racing over the lawn. I’ll keep him on my watch list for now, figuring he’ll bounce back with a better effort in his second run of the year.

During the chaos of Kentucky Derby week, we missed that Hunka Burning Love returned to action with a third-place finish in a Lone Star Park allowance race. We had a nice run with Hunka Burning Love last season, but after losing three straight races to kick off 2021, it appears the son of Into Mischief has regressed a bit. We’ll watch his next race (a handicap event on Monday at Will Rogers Downs) before determining whether he should return to our watch list.