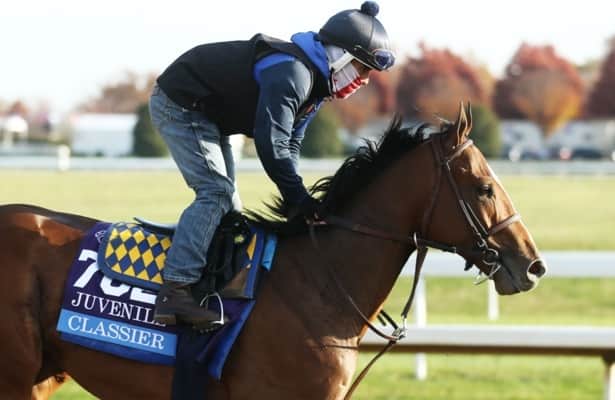 It’s been a long time since racing fans had a chance to see Classier in action. The stoutly bred son of Empire Maker debuted in 6 1/2-furlong maiden special weight on Oct. 24 at Santa Anita, leading all the way to dominate by four lengths. But the bay colt faltered when wheeling back 13 days later for the Breeders’ Cup Juvenile (G1), fading to finish eighth in his stakes and two-turn debut.

Classier hasn’t run since, but the Bob Baffert trainee has fired off a series of encouraging workouts in preparations for Sunday’s 10th race at Santa Anita, the Affirmed Stakes (G3, post time 8:30 p.m. ET). Five furlongs in :59 4/5… five furlongs in 1:00 3/5… six furlongs in 1:11 4/5… and a half mile in :49 2/5. Fitness shouldn’t be an issue for Classier, considering Baffert wins at a 28% rate with horses returning from layoffs of 90 days or more.

Classier might not be a lock to win his comeback race, but Santa Anita’s leading jockey Flavien Prat is named to ride, which has to be viewed as a positive. Throw in the fact Classier is dropping blinkers (a winning move 31% of the time for Baffert), and a strong showing should be in the offing.

Speaking of horses returning from lengthy layoffs, Luck Money will bring a 5 1/2-month break to an end when she makes her four-year-old debut in Sunday’s fourth race at Pimlico, the Searching Stakes (post time 2:19 p.m. ET).

The 1 1/2-mile distance of the Searching is unexplored territory for many of the entrants, but not for Luck Money. The Arnaud Delacour trainee handled the trip just fine in the Zagora Stakes at Belmont Park last fall, tracking a slow pace from fourth place before taking command to beat older rivals (including next-out winner Mutamakina) by a neck.

Luck Money wrapped up 2020 with a deceptively good sixth-place finish in the American Oaks (G1) at Santa Anita. Racing 1 1/4 miles (a distance likely shorter than her best), Luck Money was compromised by a slow early pace, but stayed on gamely through fast finishing fractions to cross the wire just 4 1/2 lengths behind the winner, who led a 1-2-3 finish for speed horses.

Luck Money figures to be dangerous while stretching back out over 1 1/2 miles in the Seaching. Delacour wins at a 24% rate with horses returning from layoffs of 90 days or more, and Luck Money’s work tab looks solid, capped off by a bullet half-mile in :48 2/5. She isn’t the only accomplished filly in the field—last year’s 1 1/2-mile Dowager (G3) winner Blame Debbie may put up a fight—but I’m optimistic Luck Money will prevail on Sunday, kicking off a productive 2021 campaign.