Horses to Watch: Sistercharlie could bring a fair price next out 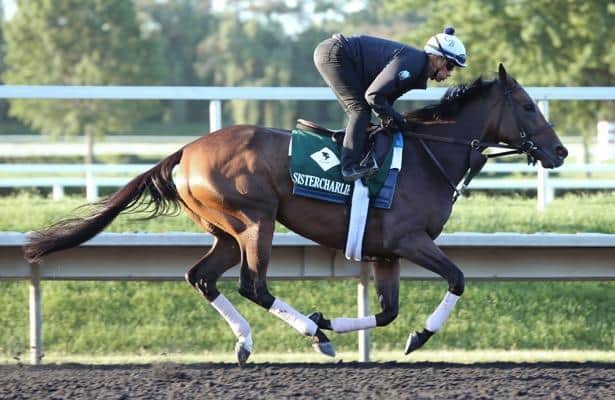 Some folks might be ready to jump off the Sistercharlie bandwagon, figuring the champion turf female of 2018 is past her peak. Granted, the 6-year-old mare has lost both her starts this summer and never seriously challenged for victory in Sunday’s Diana (G1) at Saratoga, a race she’d won two years in a row.

But I thought Sistercharlie ran deceptively well in the Diana. The pace of the 1 1/8-mile race was pedestrian, with favorites Rushing Fall and Mean Mary waltzing along through splits of :23.60, :48.38, and 1:11.90. When the real running began, Sistercharlie — trailing by four lengths — didn’t have a realistic chance to catch up. How was she supposed to gain meaningful ground when the final 3 furlongs elapsed in a blazing :33.98?

Under the circumstances, Sistercharlie ran well to rally and finish just 2 1/2 lengths behind in third place. At this point in her career, she might be more comfortable traveling 1 1/4 miles, so Sistercharlie should have a solid chance to defend her title in the Oct. 10 Flower Bowl (G1) at Belmont Park. Best of all, you might get a fair price on Sistercharlie in the wagering.

Although Mo Forza hadn’t run in seven months, the 2019 Hollywood Derby (G1) winner performed better than ever in Sunday’s Del Mar Mile Handicap (G2) at Del Mar. Favored at 6-5, the son of Uncle Mo settled in mid-pack behind quick splits of :22.59, :45.84, and 1:09.69, then split horses and roared to the front with a huge move under jockey Flavien Prat.

Mo Forza was best by a mile down the homestretch, sprinting the final furlong in a scintillating :11.21 to dominate by 4 1/4 lengths. The turf mile division in California figures to be at Mo Forza’s mercy this fall, and he might even be capable of vying for victory in the Breeders’ Cup Mile (G1) at Keeneland.

In his first start since being claimed by trainer John Sadler and Hronis Racing, the capable graded stakes performer Chaos Theory made short work of Saturday’s 5-furlong Green Flash Handicap at Del Mar. Though the son of Curlin didn’t get much pace to chase — a quarter in :22.65, a half-mile in :45.02 — he surged to the front with authority down the stretch, prevailing by a length in :56.22.

Chaos Theory was clearly full of run, sprinting the final furlong in approximately :11 flat while giving the impression he had plenty left in the tank. Much like Mo Forza, Chaos Theory appears poised for further domination of his local division, with a tilt at the Breeders’ Cup Turf Sprint (G1) also a viable possibility.

One of the most accomplished maidens in North America finally won his first race on Friday at Saratoga. Wesley Ward’s 2-year-old sprinter Golden Pal, second in his debut at Gulfstream and runner-up in the Norfolk (G2) at Royal Ascot, had little difficulty trouncing five rivals in the 5 1/2-furlong Skidmore Stakes.

The turf dash was essentially a one-horse procession. Breaking alertly under Irad Ortiz, Golden Pal sprinted to the front through fractions of :21.99 and :44.37, then rocketed the fifth furlong in :10.75 and the final sixteenth in :05.76 to win eased up by 3 1/2 lengths over stablemate Fauci. His final time of 1:00.88 missed the course record by just 0.67.

This performance produced an excellent 92 Beyer, the highest figure earned by any 2-year-old so far in 2020. It’s safe to say Golden Pal has emerged as one of the early favorites for the Breeders’ Cup Juvenile Turf Sprint (G2).

Princess Noor was never asked for her best effort and won under the lightest of hand rides with her ears pricked, so there’s no telling how fast she might have run if put to urging. Suffice to say, Princess Noor has emerged as an exciting contender for the Breeders’ Cup Juvenile Fillies (G1).

While Flash Magic was no match for stablemate Princess Noor on Saturday at Del Mar, she nevertheless rallied to finish clearly second best, 4 3/4 lengths ahead of the third-place runner. A beautifully bred daughter of Pioneerof the Nile out of the Hard Spun mare Glinda the Good, Flash Magic is a half-sister to 2018 Breeders’ Cup Juvenile (G1) champion Good Magic, so she should thrive when stretching out in distance down the road. I will be genuinely surprised if Flash Magic fails to graduate in her second start.

An 11-month layoff proved to be no obstacle whatsoever for the talented Express Train, who made his belated 3-year-old debut in a 6 1/2-furlong allowance sprint on Sunday at Del Mar. Facing 11 rivals, Express Train could have been forgiven had he shown rust off the long break. After all, the John Shirreffs-trained colt hadn’t been seen under colors since finishing a deceptively strong fourth in the 2019 American Pharoah (G1).

But Express Train shrugged off the layoff like it was nothing. After enduring a troubled start and settling near the back of the pack early on, Express Train unleashed a big rally around the turn to reach contention. Down the stretch he was absolutely full of run, surging clear under a modest hand ride from jockey Mike Smith to score by two lengths in the snappy time of 1:15.65.

Express Train appeared to be just getting going down the homestretch, not surprising since he’s a stoutly bred son of Union Rags out of a Mineshaft mare. Express Train should thrive when stretching out in distance down the road and has the potential to develop into a genuine Grade 1 star — maybe even a champion.

With a 3-for-4 record and a Group 3 win in France under his belt, Maven has emerged as a highly promising turf sprinter for Wesley Ward. The son of American Pharoah kicked off 2020 on a strong note, easily wiring a 5 1/2-furlong allowance race at Keeneland by 2 3/4 lengths.

Chad Brown’s Value Proposition didn’t receive the cleanest trip in the 1-mile Poker (G3) at Belmont Park last month. Racing between rivals down the homestretch, Value Proposition appeared to have momentum but was forced to steady in deep stretch, losing ground to finish third by 2 3/4 lengths.

Nevertheless, Value Proposition managed to finish half a length clear of Got Stormy, who returned to finish a game second in Saturday’s Fourstardave Handicap (G1) at Saratoga. A two-time allowance winner, Value Proposition can surely return to the winner’s circle while dropping in class for Thursday’s third race at Saratoga, a 1 1/16-mile turf allowance race (post time 2:20 p.m. ET). Poker runner-up Seismic Wave is back in the fray again, but Value Proposition retains the services of Saratoga’s leading rider Irad Ortiz and should be capable of turning the tables with a clean trip.

Here is my complete list of horses to watch: