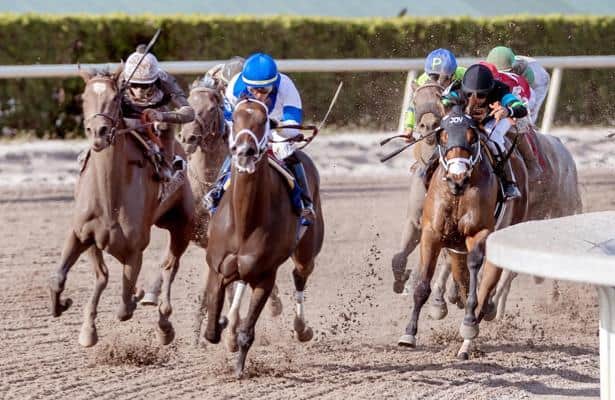 In this biweekly series, racing analyst J. Keeler Johnson shares promising horses from his handicapping watch list, reviewing runners who have recently caught his eye and previewing horses scheduled to run back in the near future.

It appears Christophe Clement has an exciting young turf horse in his barn. Far Bridge is a son of English Channel out of a mare by Kitten’s Joy, which crosses the two most successful North American grass sires of the last dozen years or so.

Far Bridge lived up to his lineage with a Saturday debut victory racing 1 1/16 miles over the Gulfstream Park turf course. Reserved in seventh position through early fractions of 23.00 and 46.99 seconds, Far Bridge began to rally around the far turn then gained 2 1/2 lengths down the homestretch to get up and win by a head in 1:39.57 seconds.

The closing fractions were fast, and the runner-up pulled six lengths clear of the rest, so it’s clear Far Bridge ran a big race. This Calumet Farm homebred looks like a future stakes star.

A son of four-time Grade 1 winner and successful sire Quality Road out of two-time Grade 1 winner Love and Pride, First Defender has the pedigree to improve with maturity and excel running long. Nevertheless, First Defender was ready to roll in his Saturday debut sprinting six furlongs at Fair Grounds, dueling for the lead through splits of 21.48 and 45.19 seconds before pulling clear to score by 5 1/4 lengths in 1:10.88.

Conditioned by Hall of Fame trainer Steve Asmussen, First Defender looks like a potentially top-class racehorse in the making. I’m excited to see what this 3-year-old colt can accomplish by the end of the year. Could we be looking at a Triple Crown contender?

The favorite #3 FIRST DEFENDER (3.80) wins on debut in race #7 at the Fair Grounds. @Tyler_Gaff was aboard for Steve Assmussen. The Colonel E. R. Bradley Stakes is up next at the Fair Grounds, Wager on it at https://t.co/nBYFHiPrdh. Watch the race on @fandueltv. pic.twitter.com/qBte6clDIZ

Added a second Road to the Kentucky Derby victory to his record when rallying to a sharp triumph in the Lecomte (G3) at Fair Grounds. Street Sense (G3) winner Two Phil’s had a three-length lead over Instant Coffee at the five-sixteenths pole, but Instant Coffee, coming off a win in the Kentucky Jockey Club (G2), relentlessly rallied down the homestretch to defeat Two Phil’s by 2 1/2 lengths.

Instant Coffee completed 1 1/16 miles over a slow-playing track in 1:45.12. For comparison, older horses required 1:45.33 seconds to complete the Louisiana (G3) one race prior. The Lecomte unfolded at a much faster early pace, but Instant Coffee’s final time is nevertheless noteworthy and a testament to his growing talent.

Hope everyone had their coffee this morning! INSTANT COFFEE adding to his #KyDerby points! pic.twitter.com/xfXpcqMBuy

Ran evenly in the Louisiana (G3) over 1 1/16 miles at Fair Grounds, tracking a slow pace from third place before weakening down the homestretch to finish fourth by 4 1/4 lengths against a deep field. It’s becoming evident Run Classic is better as a sprinter than a route racer, so I’m optimistic he’ll shine if he cuts back in distance down the road.

FanDuel TV reported that Echo Again’s stifle locked up at the top of the Lecomte homestretch, prompting jockey Tyler Gaffalione to pull him up. Winchell Thoroughbreds manager David Fiske later stated on Twitter that Echo Again is fine, a happy ending to an unfortunate turn of events. But the Lecomte marked Echo Again’s third straight defeat after his impressive debut win at Saratoga, so I’ll drop him from my Watch List and wait to see how he bounces back before playing him again.

In 2022, which 2-year-old filly earned the highest Beyer Speed Figure from Daily Racing Form? No, it wasn’t Breeders’ Cup Juvenile Fillies heroine Wonder Wheel. Nor was it Frizette (G1) winner Chocolate Gelato. The answer is Munnys Gold, who threw down a 101 Beyer Speed Figure when smashing a June 17 maiden special weight sprinting five furlongs at Monmouth Park by 14 1/2 lengths.

The form of Munnys Gold’s flashy victory was flattered when distant runner-up Alma Rosa returned to win the White Clay Creek and place in the Sorority. Munnys Gold hasn’t run since, but the Todd Pletcher trainee has put together a lengthy and eye-catching work tab in advance of Wednesday’s eighth race at Gulfstream Park, a six-furlong allowance for Florida-breds at 3:37 p.m. EST. She should be mighty tough to beat, even off the layoff.

An impressive winner of Gulfstream’s Sweetest Chant (G3) in January 2021, White Frost has run only once since, finishing a close second against a large field in the November 2021 Winter Memories at Aqueduct. The daughter of Candy Ride missed the entire 2022 season.

The good news is, White Frost is returning to action for Thursday’s seventh race at Gulfstream, a $62,500 allowance optional claimer at 3:07 p.m. The distance is one mile on turf, the same as the Sweetest Chant, so White Frost has every chance to win if she brings her A game off the layoff for trainer Bill Mott. Remember, White Frost’s Sweetest Chant triumph came at the expense of Con Lima, who later won the Herecomesthebride (G3), Wonder Again (G3), Saratoga Oaks (G3) and Honey Ryder.