Horses to Watch: Curly Jack joins, plus 2 in the entries 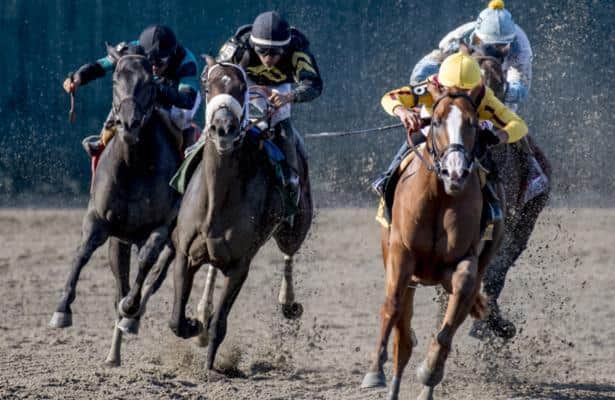 The first winner sired by 2017 Breeders’ Cup Juvenile hero and 2018 Kentucky Derby runner-up Good Magic looks like a good one. Perhaps a very good one.

Debuting in a 5 1/2-furlong maiden special weight on Thursday at Churchill Downs, Curly Jack showed speed from the start under jockey Colby Hernandez, dashing to the lead through solid splits of 22.33 and 45.62 seconds. And he still had plenty left for the homestretch drive, running the fifth furlong in 12.22 seconds and the final sixteenth of a mile in 6.44 seconds to reach the finish line clear by four lengths in 1:04.28 seconds.

2 year old CURLY JACK wins his first time out with @hernandez_colby aboard!

Trained by Tom Amoss, Curly Jack was produced by the Grade 1-placed mare Connie and Michael. Both Good Magic and Connie and Michael were stakes-caliber juveniles who kept their momentum going as 3-year-olds, so look for Curly Jack to improve with age and compete with aplomb against quality competition.

Amadevil isn’t drawing much attention on a national level, but the Ohio-bred 4-year-old filly has been pretty much a winning machine since her debut nearly one year ago. The daughter of Dominus has won six of her seven starts while flashing an abundance of speed along the way, and she even nabbed a couple of stakes by daylight margins at Thistledown last year.

Amadevil kicked off her 2022 campaign with a comfortable allowance win on May 12 at Thistledown, so she’s likely to be a clear favorite in Friday’s ninth race at Belterra Park, the Best of Ohio Diana S. (post time 4:51 p.m. EDT). Drawing the outside post in a field of 11 is concerning since Amadevil has been known to occasionally bear out sharply at the start, including when breaking from the outside post in her May 12 allowance score. But if Amadevil breaks cleanly, she’ll have every chance to secure a third stakes win.

Is Midnight Memories a stakes star in the making? The 3-year-old daughter of Mastery certainly looked like a promising filly in her April 30 debut at Santa Anita. Favored at 4-5 to win a 6 1/2-furlong maiden special weight, Midnight Memories settled behind a fast pace early on before rallying to win by 1 1/4 lengths in the strong time of 1:15.31 seconds, earning a 101 Brisnet Speed rating.

A repeat of that performance would make Midnight Memories tough to beat while facing older rivals in Sunday’s eighth race at Santa Anita, a $50,000 allowance optional claimer (post time 7:30 p.m.). Midnight Memories is facing half a dozen capable rivals, including the graded stakes-placed Lady Aces, but her 101 Brisnet Speed rating ranks as the highest figure in the field by nine points. If Midnight Memories performs similarly to her maiden run, she can cruise to victory under hot jockey Juan Hernandez and jump into stakes company next time.