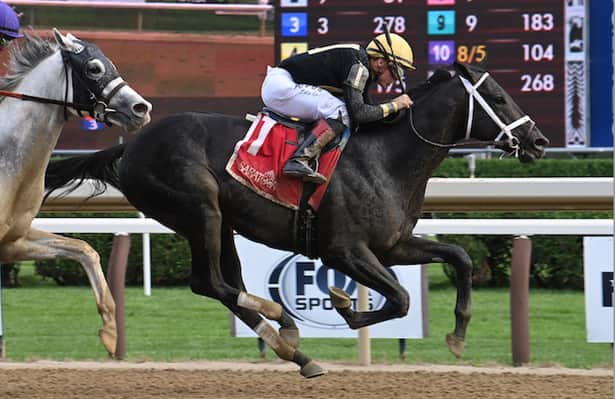 It’s easy to understand why Instant Coffee is the morning line favorite to win Saturday’s 11th race at Churchill Downs, the Kentucky Jockey Club (G2, post time 5:56 p.m. EST). The son of hot young sire Bolt d’Oro has a lot of positives in his corner. For starters, Instant Coffee recorded a fast time of 1:22.77 when winning his debut in a seven-furlong maiden special weight at Saratoga. For another, Instant Coffee followed up with a respectable fourth-place finish in the Breeders’ Futurity (G1) at Keeneland, a race won by next-out Breeders’ Cup Juvenile winner Forte.

Throw in the fact Instant Coffee is conditioned by two-time Eclipse Award-winning trainer Brad Cox, and the morning line favorite looks tough to beat while dropping into the Grade 2 ranks for this Road to the Kentucky qualifier.

A son of 2018 Triple Crown winner Justify, Tres Soles looked like a talented colt in his debut at Churchill Downs, surviving a long duel to win a six-furlong maiden special weight by a neck. But Tres Soles regressed when tackling a $100,000 allowance optional claimer at Keeneland last month, finishing sixth by 22 3/4 lengths in the seven-furlong sprint.

On the bright side, that allowance was a fast race in which 1-2 finishers Giant Mischief and Arabian Lion pulled 17 1/2 lengths clear of the rest, so Tres Soles’s margin of defeat is deceiving in some respects. The Steve Asmussen trainee has a chance to get back on track in Saturday’s eighth race at Churchill Downs, a $100,000 allowance optional claimer (post time 4:27 p.m. EST). Stretching out over 1 1/16 miles should prove more suitable for Tres Soles, who is bred top and bottom to thrive running long.

Is Victory Formation a stakes star in the making for Brad Cox? The stoutly bred son of Belmont Stakes winner Tapwrit certainly looked like one in a 6 1/2-furlong maiden special weight at Keeneland last month, leading all the way to trounce a next-out winner by 4 3/4 lengths.

Victory Formation will seek to bring his record to a perfect 2-for-2 in Saturday’s third race at Churchill Downs, a $100,000 allowance optional claimer (post time 1:59 p.m. EST). Cox trainees often improve when racing for the second time, so Victory Formation has to be viewed as a key win threat even while cutting back to six furlongs.

Speaking of stakes stars trained by Cox, West Will Power has already made his name at a high level. The son of Preakness winner Bernardini was a dominant winner of the 1 1/8-mile Fayette (G2) at Keeneland last month, leading all the way to crush four graded stakes winners by 6 3/4 lengths.

Off this impressive victory, West Will Power is a formidable win threat in Friday’s 11th race at Churchill Downs, the Clark (G1, post time 5:56 p.m. EST). He’s squaring off against 2022 Kentucky Derby winner Rich Strike, but West Will Power has more tactical speed than the Derby winner and figures to enjoy a favorable trip setting or stalking a slow pace.