Horses to Watch: Check out this young Gulfstream standout 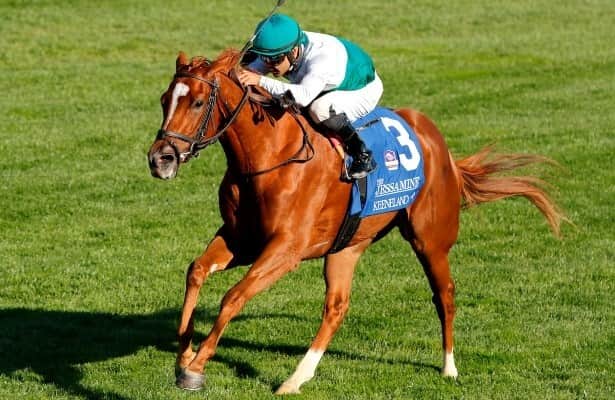 I don’t know exactly what to make of New York Thunder. He’s unproven on dirt and turf, and his pedigree is arguably geared toward early maturity rather than long-term success.

But wow, did New York Thunder make a great visual impression in his Nov. 27 debut sprinting five furlongs over the Tapeta track at Gulfstream Park. Despite breaking just a step slowly from post two, New York Thunder recovered to secure a one-length lead through a fast opening quarter-mile in 21.49 seconds.

New York Thunder maintained his lead around the far turn, and when jockey Jose Morelos asked the bay colt to accelerate in the homestretch, the response was eye-catching. New York Thunder took off like he’d just jumped into the race, running the half-mile in 44.06 seconds before sprinting clear through a final furlong in 11.71 seconds to dominate by 6 1/2 lengths.

New York Thunder reached the finish line in a snappy 55.77 seconds, 0.37 seconds off the track record. A son of Kentucky Derby (G1) winner Nyquist out of a mare by Breeders’ Cup Juvenile (G1) winner Midshipman, New York Thunder looms as an exciting 2-year-old for trainer Jorge Delgado. I’m interested to see where he turns up this winter.

How good is Delight? It’s hard to say. She was impressive when parlaying an easy lead into a five-length victory in Keeneland’s Jessamine (G2) two starts back, but chasing a quicker pace against tougher competition in the Breeders’ Cup Juvenile Fillies Turf saw Delight fade to finish 10th.

We’ll get a better feel for Delight’s ability when she starts as the 5-2 morning line favorite against 10 rivals in Saturday’s eighth race at Gulfstream Park, the Wait a While (post time 3:38 p.m. EST). She’s drawn the far outside post position and risks a wide trip, but dropping in class may prove sufficient to send Delight back to the winner’s circle.

Faiza is a daughter of 2017 Haskell (G1) winner Girvin, a hot young stallion who has already sired the stakes winners Damon’s Mound, Dorth Vader, Devious Dame, and Atomically. Faiza herself looked like a stakes winner in the making when she debuted in a six-furlong maiden special weight on Nov. 12 at Del Mar, employing dueling tactics to draw off and defeat next-out maiden winner Lily Poo by 3 1/2 lengths.

The early fractions were hot (21.92 and 44.76 seconds), but Faiza was never in danger of getting caught down the homestretch, with jockey Flavien Prat barely asking her for anything through the final sixteenth of a mile. Faiza has since breezed a sharp seven furlongs in 1:25 seconds at Santa Anita, suggesting the bay filly has every chance to give Baffert a record-breaking ninth overall victory in the Starlet. With eight wins, Baffert is currently tied with D. Wayne Lukas as the winningest trainer in Starlet history.