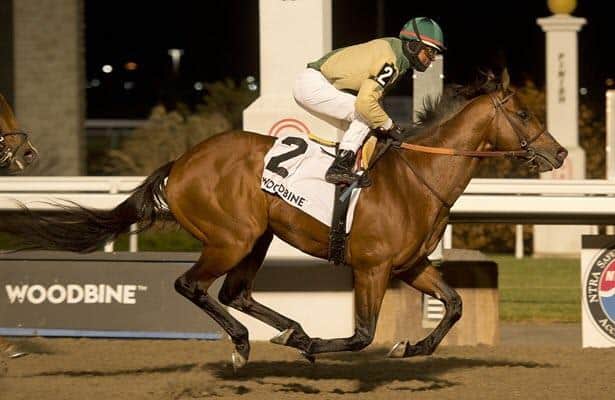 In this biweekly series, racing analyst Keeler Johnson will share promising horses from his handicapping watch list, reviewing runners who have recently caught his eye and previewing horses scheduled to run back in the near future

It’s safe to say Elle Z has come a long way since winning her debut on dirt at Will Rogers Downs. The daughter of City Zip has always shown flashes of talent, but she has really put everything together in recent months, emerging as a high-caliber turf sprinter with serious front-running speed.

Elle Z first signaled her star potential when wiring a 5 1/2-furlong allowance race over the Keeneland turf course Oct. 15. As a 3-year-old facing older rivals off a poor showing on dirt, Elle Z was disregarded at 47-1. Yet with jockey Mitchell Murrill in the saddle, Elle Z blazed to the front through fractions of :21.55 and :44.58 before kicking on nicely down the stretch to score by 1 1/4 lengths.

Elle Z was even sharper in the 5 1/2-furlong Pan Zareta Stakes at Fair Grounds last month. Facing a deep field, Elle Z once again sprinted to the front under Murrill’s guidance, then withstood multiple challenges to beat Breeders’ Cup Turf Sprint participant Into Mystic by a length.

Elle Z will attempt to keep her momentum going in Saturday’s ninth race at Fair Grounds, the $75,000 Nelson J. Menard Memorial Stakes (post time 5:52 p.m. EST). Sticking to 5 1/2 furlongs for her 4-year-old debut should suit Elle Z just fine, and Murrill – who currently leads the jockey standings at Fair Grounds – will retain the mount for hot trainer Chris Hartman. What’s not to like? There isn’t much pace in the Menard Memorial field, and Elle Z seems destined to post another front-running victory at a fair price.

Nine graded stakes winners have assembled for Saturday’s tenth race at Gulfstream Park, the $100,000 Tropical Turf (G3, post time 4:49 p.m. ET). But not all of them are entering the one-mile turf test in peak form, which should provide Ride a Comet with a chance to steal the show.

If you judge Ride a Comet off his most recent races, it’s easy to conclude the 6-year-old son of Candy Ride is best as a Tapeta-track sprinter. After missing the entire 2019 season, Ride a Comet returned in the fall of 2020 to win a seven-furlong allowance race and the six-furlong Kennedy Road (G2) over the Woodbine Tapeta course. In the latter race, Ride a Comet unleashed an eye-catching rally to win eased up by 1 1/4 lengths. His final time of 1:08.25 missed the track record by just .20 seconds, and six-time Sovereign Award winner Pink Lloyd was among Ride a Comet’s beaten rivals.

But did you know Ride a Comet also boasts a near-perfect 4-for-5 record on grass? Back in 2018, the Mark Casse trainee was a thoroughly capable turf router, capping off his sophomore season with late-running triumph in the 1 1/8-mile Del Mar Derby (G2). Finishing two lengths behind in third place was River Boyne, future winner of the Frank E. Kilroe Mile (G1).

With these excellent form line under his belt, Ride a Comet appears poised to vie for victory while returning to grass for the Tropical Turf. He’s certainly been training up a storm over the lawn at Palm Meadows, most recently rocketing five furlongs in a bullet 58.3 seconds.

Frostmourne and Analyze It loom as formidable rivals in the Tropical Turf, but with the right trip, Ride a Comet can give them a run for the money.

Charlie's Penny shines bright in Silverbulletday
In what was her first try around two turns, Lothen...