Horses to Watch: Can Cezanne upset Honor A. P. in Shared Belief? 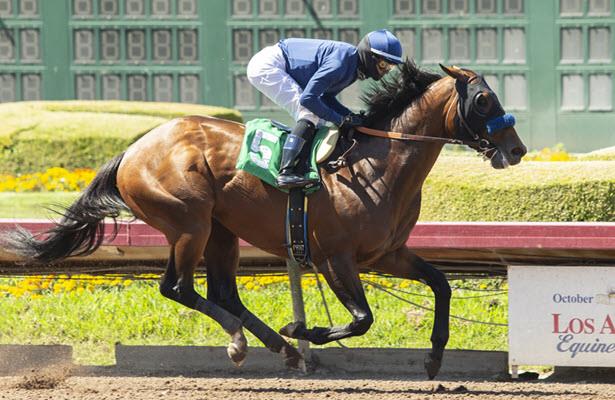 The 5-year-old Phipps Stable homebred Breaking the Rules has always shown potential for trainer Shug McGaughey. A powerful 3 1/2-length winner of the 2018 Tropical Park Derby, Breaking the Rules was beaten just a head in the 2019 Canadian Turf (G3), but disappointed in two subsequent runs against tougher company and later went to the sidelines for a full year.

The son of War Front finally returned to action in a 1 1/8-mile allowance race at Belmont, and the result was eye-catching. After tracking the early pace, Breaking the Rules sprinted the final furlong in :11.35 to defeat graded stakes winner and next-out Saratoga allowance winner Digital Age by a head.

Breaking the Rules then brought his 2020 record to a perfect 2-for-2 with a sharp allowance victory Wednesday at Saratoga. Racing 1 1/16 miles, Breaking the Rules settled in third place for most of the journey before sweeping to the front in the stretch, winning by a length over graded stakes performers Therapist, Devamani, and Made You Look.

With his blend of tactical speed and finishing power, Breaking the Rules has developed into a versatile and effective turf horse. A return to stakes company figures to be next on the agenda.

This 3-year-old son of Smarty Jones was favored at 9-10 to win a 6 1/2-furlong allowance sprint on Tuesday at Parx Racing, but after dueling for the lead through quick fractions of :21.89 and :44.87, he couldn’t produce the needed finish to stem off a homestretch challenge from Fortheluvofbourbon.

Dreams Untold didn’t run poorly by any means. He was only beaten two lengths while pulling 6 1/2 lengths clear of the third-place finisher, and the winner’s final time of 1:15.80 was respectable, producing a 92 Beyer speed figure.

But Dreams Untold was nevertheless defeated fairly and squarely. Perhaps he’ll benefit from setting more relaxed fractions in longer races down the road, but until such a time comes, I’ll remove him from my watch list.

This $3.65 million 2-year-old purchase has gone 2-for-2 under the care of Bob Baffert, breaking his maiden sprinting at Santa Anita before cruising to victory in a 1-mile allowance race at Los Alamitos. But the son of Curlin has picked a tough spot to make his stakes debut—he’s slated to face the formidable Santa Anita Derby (G1) winner Honor A. P. in Saturday’s second race at Del Mar, the Shared Belief Stakes (post time 5:30 p.m. ET).

Considering the quality of competition Cezanne is facing, I won’t be disappointed if he fails to win. A gallant runner-up effort behind Honor A. P. would be sufficient to keep him on my watch list. But who knows? Cezanne might be capable of springing a surprise.

A victory in the Shared Belief will likely be necessary to secure Cezanne a spot in the Kentucky Derby starting gate, so you know Baffert will have Cezanne cranked for a peak effort. In contrast, Honor A. P. has turned in a modest series of workouts since the Santa Anita Derby and appears to be using the Shared Belief primarily as a means to stay fit in the leadup to the Kentucky Derby. If Cezanne takes a step forward and catches Honor A. P. at something less than his absolute best, we might be in for a race.

Watch list member Uncle Chuck is also entered in the Shared Belief, though he will scratch to target the Aug. 8 Travers (G1) at Saratoga instead.

Shug McGaughey’s 2019 Travers (G1) winner Code of Honor joined my watch list after posting a deceptively comfortable victory in the Westchester (G3) to kick off 2020, and I kept him on my list even after he finished third in the Metropolitan Handicap (G1). A slow pace and a wide trip made it difficult for Code of Honor to vie for victory, but he nevertheless sprinted the final quarter in about :23 flat to finish third, beaten just 1 1/2 lengths by Carter Handicap (G1) winner Vekoma.

I’m optimistic Code of Honor will show improvement when stretching out in distance for Saturday’s ninth race at Saratoga, the Whitney (G1, post time 5:42 p.m. ET). The two-turn, 1 1/8-mile configuration should be right up his alley, and Code of Honor’s 2-for-2 record at Saratoga suggests he holds a special affinity for racing at “the Spa.” The Whitney has drawn a deep and competitive field, but with a fair pace setup, Code of Honor can spring a mild surprise.

Which horses do you have your eye on this week?