Horses to Watch: Born Great heads in the right direction 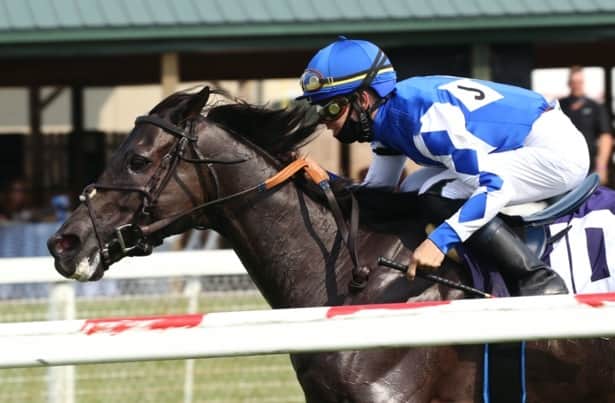 Born Great isn’t necessarily destined for superstardom, but he’s certainly proving to be a capable turf sprinter. A son of Scat Daddy out of a More Than Ready mare, the 5-year-old gelding is bred to excel racing a mile or less on turf, and he’s living up to his pedigree with three victories from his last four starts sprinting.

Born Great’s most recent effort came in a 5 1/2-furlong allowance optional claiming race at Fair Grounds last Wednesday. Racing over a firm course, Born Great flashed uncharacteristic early speed from the start, cruising along through splits of :22.22 and :46.62 before kicking clear to beat the stakes-placed Seven Scents by 1 1/2 lengths.

The winning time of 1:04.82 wasn’t anything to write home about, but Born Great is steadily progressing in the right direction for trainer Brendan Walsh. Versatile enough to win with multiple running styles, Born Great looks capable of nabbing a stakes victory in the near future.

It’s safe to say Jouster ran out of her skin in a 1 1/16-mile maiden race over the Gulfstream Park turf course on Sunday.

A beautifully bred daughter of Noble Mission out of a Street Cry mare, Jouster ran twice as a 2-year-old in 2020, finishing second and fifth in a pair of maiden special weights on dirt at Saratoga and Belmont Park. Her form was unremarkable, but transitioning to grass dramatically propelled the Todd Pletcher trainee to new heights. After showing the way through fractions of :23.36, :48.01, and 1:11.79, Jouster accelerated the fourth quarter-mile in :22.33 and the final 16th in :05.8 to trounce her pursuers by 8 3/4 lengths.

Jouster reached the finish line in a swift 1:39.92, and from a visual perspective, she looked fantastic. The bay filly was absolutely full of run down the lane, drawing clear with power and authority under a vigorous hand ride from jockey Luis Saez. If she can repeat this performance down the road — and there’s no reason to think she won’t — races like the Belmont Oaks (G1) or Saratoga Oaks (G3) could well be at her mercy.

Switching back to turf off a couple of big runs on Tapeta proved to be no obstacle for Ride a Comet. In fact, the Mark Casse-trained 6-year-old ran better than ever in the 1-mile Tropical Turf (G3) on Saturday at Gulfstream Park, winning in spite of a challenging race shape.

Reserved in fourth place early on while racing wide, Ride a Comet should have been compromised by early fractions of :24.09 and :47.78. These modest splits should have lent an advantage to the front-running Frostmourne and the pace-tracking Casa Creed, both capable graded-stakes winners starting at short prices in the betting.

But Ride a Comet turned expectations upside down in the homestretch, unleashing a terrific burst of acceleration to run down the leaders. Sprinting the penultimate furlong in :11.23 — and the final furlong in :11.17! — Ride a Comet prevailed by a deceptively decisive half-length over Casa Creed, with Frostmourne another 1 1/2 lengths behind.

Ride a Comet has been unstoppable since returning from a 25-month layoff last fall, and at this point, there’s no telling how high he might ascend. The 2021 Breeders’ Cup Mile could be a realistic goal for Ride a Comet, who seems clearly capable of claiming a top-class mile at some point this season.

She fired off another gutsy effort in her 4-year-old debut, finishing second in the Nelson J. Menard Memorial Stakes on Saturday at Fair Grounds. Dashing 5 1/2 furlongs over a “good” turf course, Elle Z posted splits of :22.56 and :46.81 before facing a winning challenge from 13-10 favorite Into Mystic in the homestretch. Yet even when passed at the eighth pole, Elle Z refused to yield entirely, battling on with tenacity to finish just a length away from victory.

Elle Z is developing into a rock-solid turf sprinter for trainer Chris Hartman. Only time will tell whether she can step up her game against graded stakes company, but if Elle Z is carefully spotted through the season, she can win more than her fair share of races.

Here is my complete, updated list of horses to watch: