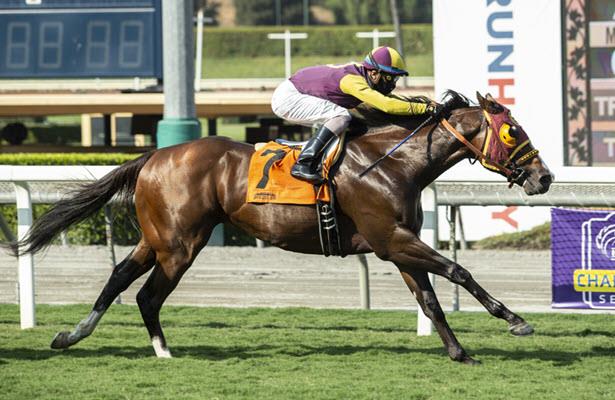 Big Runnuer has always been a capable performer for trainer Victor Garcia, but the lightly raced 5-year-old has elevated his game to a new level in 2020. The son of Stormy Atlantic is 3-for-3 this season and pretty much ran out of his skin in Friday’s 5 1/2-furlong Eddie D Stakes (G2) at Santa Anita.

Breaking quickly from the starting gate, Big Runnuer opened up a daylight lead through fractions of :21.96 and :43.98, then forgot to stop down the homestretch. Sprinting the fifth furlong in :11.25, and the final sixteenth in :05.93, Big Runnuer cruised home clear by a length in 1:01.15, just 0.15 off the course record.

The Eddie D marked Big Runnuer’s second stakes triumph of the year, following a similarly front-running victory in the June 21 Siren Lure Stakes. With his abundance of speed, Big Runnuer has emerged as a serious threat to win the Nov. 7 Breeders’ Cup Turf Sprint at Keeneland.

#1 Coastal Defense had plenty left in the tank to hold off #KyDerby alum, #4 Major Fed, in Race 3 at @ChurchillDowns pic.twitter.com/VVAzzHBxTN

Coastal Defense’s fast finish carried him to victory by 2 1/2 lengths over Indiana Derby (G3) runner-up and Kentucky Derby (G1) starter Major Fed. Stretching out in distance seems to have worked magic for Coastal Defense, a 4-year-old son of Curlin out of the Giant’s Causeway mare Trensa, previously the dam of Grade 1-winning routers Hawkbill and Free Drop Billy. With his stout breeding and improving profile, Coastal Defense appears bound for stakes company in the near future.

After doing all the dirty work pressing Clement L. Hirsch (G1) winner Fighting Mad through fractions of :23.37, :46.51, and 1:10.21, Harvest Moon gamely battled past the pacesetter in the homestretch. She could have faltered when challenged late by Grade 1 winner Hard Not to Love, but instead Harvest Moon dug deep to win by three-quarters of a length in 1:43.03.

How high can Harvest Moon ascend? It’s hard to knock anything she’s done to date, and beating a pair of Grade 1-winning older rivals is a significant feather in Harvest Moon’s cap. The Nov. 7 Breeders’ Cup Distaff (G1) could be next on the agenda.

Bob Baffert’s Del Mar Debutante (G1) winner Princess Noor brought her record to a perfect 3-for-3 with a powerful victory in the Chandelier (G2). In her debut around two turns, the daughter of Not This Time rated comfortably in mid-pack, then swept to the front on the final turn and drew clear under a light hand ride to score by 8 1/4 lengths.

It wasn’t the fastest race on the clock, but the effortless nature of Princess Noor’s triumph was eye-catching. She still hasn’t been asked for her best run and looms as a clear favorite to win the Nov. 6 Breeders’ Cup Juvenile Fillies (G1).

In his second start off an 11-month layoff, Express Train ran deceptively well in a 1-mile allowance race on Saturday at Santa Anita. Racing wide while tracking fractions of :23.23, :46.69, and 1:11.23, Express Train couldn’t quite catch the pace-pressing 4-year-old Extra Hope, but never gave up and battled gamely down the lane to finish second by three-quarters of a length.

The final time of 1:36.19 produced a solid 92 Beyer, and I’m optimistic Express Train will improve with this effort under his belt. Trainer John Shirreffs is taking a patient approach with this talented 3-year-old, so I’m on the bandwagon for the long run.

Although Hunka Burning Love could only finish fifth in Sunday’s 6-furlong David M. Vance Stakes at Remington Park, I wasn’t particularly disappointed by his performance. The distance was surely too short for this tried-and-true route runner, who rallied into the teeth of hot fractions before weakening in the final furlong. He can rebound while stretching back out in distance down the road.

This capable sprinter endured a tough trip in the Eddie D (G2) on Friday at Santa Anita, breaking from the rail and getting buried behind horses early on. Once he shifted outside for racing room, Wildman Jack gained 3 1/2 lengths down the final furlong to finish second by a length. Given a clean trip, he might have challenged for victory.

This juvenile filly faltered as the 2-5 favorite in a 6-furlong maiden special weight on Sunday at Santa Anita, losing ground on the far turn before re-rallying up the rail to finish second by a nose. It wasn’t a bad defeat, by any means, and she’s bred to improve while stretching out in distance. But the final time of 1:12.54 was slow, so I’m not sure I’d be keen to play Flash Magic at another short price next time.

Had every chance to win Friday’s Chillingworth (G3) at Santa Anita while favored at 7-10, but after dueling for the lead through splits of :22.18 and :44.94, Qahira weakened slightly to finish second in a crowded finish. Considering the top four finishers were separated by just 1 1/2 lengths, I suspect the Chillingworth wasn’t the strongest race, so Qahira’s failure to deliver at a short price makes her harder to trust next time.

Escaped with relatively easy fractions of :22.33 and :45.53 in the Vosburgh (G2) on Saturday at Belmont, but failed to kick on down the stretch and settled for third place, beaten four lengths. This former claimer probably will rebound if he drops down to Grade 3 or listed company for his next start, but after faltering with a perfect trip in the Vosburgh, I don’t necessarily expect him to improve in the immediate future.

Yaupon was an impressive front-running winner of the Aug. 29 Amsterdam (G2) at Saratoga, carving out fractions of :21.93 and :44.68 over a muddy track before edging away to beat two-time Grade 1 winner Basin by two lengths. A repeat of this effort should be sufficient to land Yaupon in the Chick Lang winner’s circle.