Horses to Watch: An impressive 8 to keep your eye on 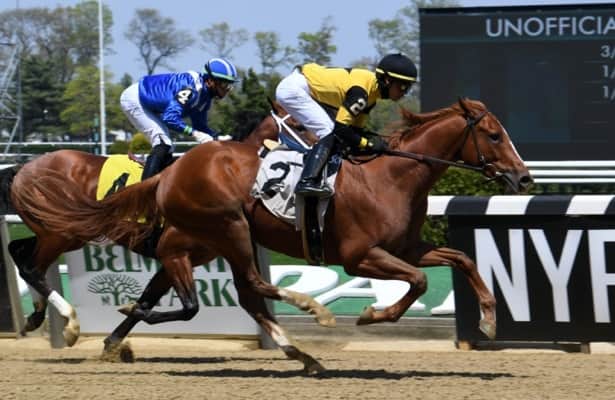 Sold for $1.5 million as a yearling, First Captain is a beautifully bred son of Curlin out of the A.P. Indy mare America, who won the Turnback the Alarm Handicap (G3) and more than $580,000 during her accomplished career. When First Captain emerged in the entries for a seven-furlong maiden special weight at Belmont Park last Saturday, I wrote the following in an article here on Horse Racing Nation:

“A.P. Indy was a breed-shaping stallion, and Curlin is quickly emerging as the same, so I’m excited to see what First Captain can accomplish under the care of Hall of Fame trainer Shug McGaughey. Since First Captain’s pedigree is absolutely stuffed with stamina, I don’t necessarily expect him to fire a winning shot sprinting seven furlongs on debut. But once First Captain stretches out in distance … watch out!”

First Captain exceeded my expectations. Even though McGaughey isn’t known for winning with a high percentage of first-time starters, First Capitain was ready to roll on debut. After chasing the pace from third place, First Captain dropped back around the turn and appeared destined for defeat. But then he re-engaged down the homestretch, rocketing the final furlong in :11.95 to defeat 6-5 favorite Mahaamel by three-quarters of a length.

If First Captain can show this much promise sprinting seven furlongs, what will happen when he stretches out around two turns? We could be looking at the Travers (G1) winner if First Captain develops the way his pedigree suggests he will.

Not to be outdone by First Captain, Flightline turned in a spectacular debut of his own on Saturday at Santa Anita. Favored at 9-10 in a six-furlong dash, the John Sadler trainee flashed serious speed right out of the gate, taking command through an opening quarter-mile in :21.59. This blazing fraction seemed to burn out all of Flightline’s pursuers, as none could keep pace through the favorite’s testing :44.42 half-mile.

By the time Flightline reached the quarter pole, he was clear by 4 1/2 lengths, and he only widened from there. Under the lightest of hand rides from jockey Flavien Prat, Flightline drew clear like a monster in the making to score by 13 1/2 lengths in 1:08.75.

As a son of Tapit out of the multiple Grade 1-placed Indian Charlie mare Feathered, Flightline has the breeding to stretch out over at least one mile. You can bet the hype will be high when Flightline makes his first start against winners, and rightfully so – he could be any sort of star.

Bob Baffert’s promising 4-year-old lived up to her pedigree (and 3-5 odds) with a powerful performance in the Santa Margarita (G2) at Santa Anita.

Stretching out over 1 1/8 miles proved to be no problem for the dark bay filly. Sprinting to the lead under jockey Mike Smith, As Time Goes By threw down solid fractions of :23.17, :46.98, and 1:11.36 before powering clear down the homestretch. Despite never being asked for her best effort, As Time Goes By drew off with her ears pricked to trounce her pursuers by 9 1/4 lengths.

As Time Goes By reached the finish line in 1:49.95 to secure her first graded stakes win. A daughter of Baffert’s 2015 Triple Crown winner American Pharoah, As Time Goes By was produced by the multiple Grade 1-winning mare Take Charge Lady, previously the dam of champion Will Take Charge and Florida Derby (G1) winner Take Charge Indy.

Suffice to say, it appears as though As Time Goes By is poised to follow in the family footsteps and nab a Grade 1 win before the year is out.

Just how good is War Like Goddess? Good enough to obliterate 10 rivals in the Bewitch (G3) at Keeneland. The daughter of English Channel is quickly developing into a beast for Hall of Fame trainer Bill Mott, and the sky is the limit for her potential this season.

War Like Goddess could have been forgiven if she had lost the Bewitch after dropping back to ninth place through pedestrian fractions of :24.46, :49.73, 1:15.96, and 1:41.73. But once Julien Leparoux steered her outside of rivals, the 1 1/2-mile race was over. Rocketing the final half mile in :46.90 (and the final quarter in approximately :22.24), War Like Goddess simply swallowed her rivals, advancing under her own power and drawing clear under a hand ride to win by 3 3/4 lengths.

War Like Goddess clearly relished every inch of the 1 1/2-mile distance, which she completed in 2:29.21. I have to think the Sept. 4 Flower Bowl (G1) racing 1 3/8 miles at Saratoga will be high on War Like Goddess’ agenda for the remainder of 2021, with the Nov. 6 Breeders’ Cup Filly & Mare Turf (G1) looming as another long-term goal.

Crystal Cliffs was too good to lose when returning from a 10-month layoff in the Dahlia Stakes at Pimlico. After saving ground in fourth place, the daughter of Canford Cliffs rallied up the rail to seize a clear lead in mid-stretch but couldn’t quite sustain her momentum through a rapid final sixteenth in :05.93. In the last few strides, Crystal Cliffs succumbed by a nose to the stretch-running Xanthique.

Still, it’s hard to feel too bad about Crystal Cliffs’ defeat. She’s clearly come back in fine form for trainer Graham Motion, and if Crystal Cliffs improves in her second start of the season, she can nab a stakes win of her own.

Showed a bit more tactical speed in a 1 1/8-mile turf allowance race on Friday at Keeneland but failed to kick on the way I’d hoped in the homestretch, weakening to finish fourth by 4 3/4 lengths. I still think Blue Cat has the potential to mature into a capable grass horse, but after two straight defeats, I’ll drop him from my watch list for now.

Ran below form again in the Santa Margarita, tracking the pace before weakening to finish a distant third. Last year’s Zenyatta (G2) winner seems to have regressed this season, so I’ll want to see a rebound before returning her to my watch list.

Fresh off of a spectacular debut victory at Keeneland, Averly Jane looms as the horse to beat in Wednesday’s ninth race at Churchill Downs, the Kentucky Juvenile Stakes (post time 4:52 p.m. EDT).

Never mind the fact Averly Jane is a filly facing male rivals – her 8 3/4-length maiden romp was arguably the best 2-year-old debut of the Keeneland spring meet. Trainer Wesley Ward has mentioned Averly Jane as candidate for the prestigious Royal Ascot meet in England, and I’m optimistic Averly Jane will win for fun again on Wednesday.

A formidable field has been entered in Thursday’s 10th race at Churchill Downs, the Unbridled Sydney Stakes (post time 5:45 p.m. EDT), and it looks like a tough spot for Elle Z. Not because the caliber of competition is too fierce – I think Elle Z has the talent to hold her own against this group – but because the weather forecast is unfavorable.

Elle Z misfired in the Giant’s Causeway Stakes at Keeneland last month, when she carved out the pace over an unfamiliar yielding turf course. Unfortunately, there’s rain in the forecast for Wednesday and Thursday at Churchill Downs, so Elle Z’s chances may depend on how much precipitation the turf course receives.

But Sayyaaf’s blinding speed might be dulled by a damp course at Churchill Downs, so although I’m optimistic Sayyaaf has the potential to develop into a stakes star for new trainer Mike Maker (who claimed the son of Sepoy last time out), he might need firm going to show his best.