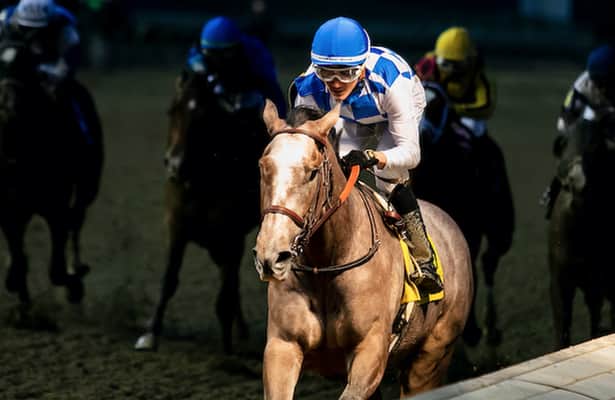 Three starts, three victories. The exciting 2-year-old filly Hoosier Philly kept her perfect record intact with a blowout victory in the Golden Rod (G2) at Churchill Downs, cementing her status as an early favorite for the 2023 Kentucky Oaks.

Just like her romp in the Rags to Riches one month ago, Hoosier Philly trounced her rivals with ease, settling a few lengths off splits of 24.29 seconds, 47.79 seconds and 1:12.28 before racing clear to dominate by five lengths. The daughter of Into Mischief completed 1 1/16 miles in 1:43.94 seconds and looks like a possible Grade 1 type in the making for trainer Tom Amoss.

A Three Chimneys Farm homebred son of 2017 horse of the year Gun Runner, Gun Pilot looked like a future stakes star when debuting in a seven-furlong maiden special weight on Saturday at Churchill Downs.

Gun Pilot showed speed from the start, pressing an opening quarter-mile in 22.88 seconds before taking over through half a mile in 46.63 seconds. From there, the outcome was never really in doubt as the Steve Asmussen trainee pulled clear to beat 11 rivals by three lengths.

#12 Gun Pilot much the best in the @ChurchillDowns night cap to break the maiden at first asking with @RSantana_Jr up for Steve Asmussen to pay $25.50.

Gun Pilot finished up nicely (running the final three furlongs in 37.39 seconds) to complete seven furlongs in 1:24.02. He’s bred top and bottom to thrive running long and factor in the spring classics, so all signs suggest Gun Pilot will be a player on the Road to the Kentucky Derby.

The third time was the charm for Point Proven, a son of Gun Runner out of a mare by Preakness winner Bernardini. Tackling a 1 1/8-mile maiden special weight on Saturday at Churchill Downs, Point Proven tracked the pace through fractions of 23.82 seconds, 47.80 seconds, and 1:12.96 before powering away to win by five lengths.

#7 Point Proven powers home to take Race 5 from @ChurchillDowns to break the maiden with ?? @luissaezpty up for @PletcherRacing to pay $6.50.

Point Proven sprinted the final furlong in an excellent 12.33 seconds to complete the race in 1:50.80 seconds. Todd Pletcher conditions the bay colt for the partnership of Repole Stable and St. Elias Stable, and it’s not hard to imagine Point Proven improving with maturity (as his pedigree suggests he will) and developing into a threat for the 2023 Kentucky Derby. The 1 1/2-mile Belmont Stakes might be an even better fit.

He bounced back from a fourth-place finish in the Breeders’ Futurity (G1) to post a determined victory in the Kentucky Jockey Club (G2) at Churchill Downs. Racing off the pace through slow fractions of 24.76 seconds, 50.00 seconds and 1:15.02 was surely disadvantageous for Instant Coffee, but as the pacesetters weakened down the homestretch, Instant Coffee rallied gamely to defeat Iroquois (G3) winner Curly Jack by 1 1/4 lengths.

Instant Coffee was full of run down the homestretch, running the fourth quarter-mile in a terrific 23.75 seconds and the final sixteenth in 6.23 seconds, according to Trakus. This Brad Cox trainee is progressing in the right direction and looms as one to watch on the road to the Kentucky Derby.

Victory Formation could have thrown in the towel down the homestretch of a $100,000 allowance optional claimer on Saturday at Churchill Downs. After dueling hard for the lead through fractions of 21.44 and 45.11 seconds, Victory Formation lost the lead to Two Eagles River, who had been eyeing the duel from third place.

But as a son of Belmont Stakes winner Tapwrit out of a mare by Smart Strike, Victory Formation is bred for stamina, and it turns out the bay colt had something left in the tank. Battling back in the final furlong, Victory Formation reclaimed the lead to win by a neck, completing the six-furlong sprint in 1:09.52 seconds. It appears Brad Cox has yet another talented 2-year-old in his stable.

Ran a gallant race while stepping up into top-level company for the Clark (G1) at Churchill Downs, setting fractions of 23.94 seconds, 48.51 seconds and 1:12.76 before digging deep to miss by three-quarters of a length against the pace-tracking Proxy. The final time of 1:48.89 seconds for 1 1/8 miles was solid, so I’ll keep West Will Power on my watch list and see whether he can continue his forward progression in 2023.

PROXY ($7.08) and jockey @JRosarioJockey stalk the pace and put pressure on West Will Power to wear him down in the stretch to take the $750K Clark (GI).

Failed to challenge for the second straight race, finishing seventh by 22 1/4 lengths in a $100,000 allowance optional claimer on Saturday at Churchill Downs. I’ll want to see Tres Soles bounce back with a stronger run before playing him again.