Horses to Watch: See who joins Flightline on the list 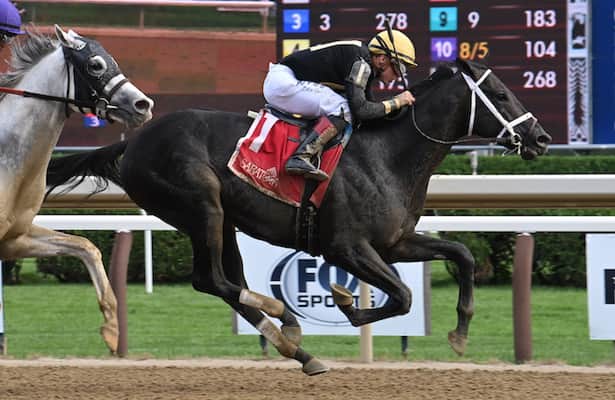 Instant Coffee wasn’t widely expected to win his debut sprinting seven furlongs on Saturday at Saratoga. The 2-year-old son of Bolt d’Oro started at odds of 14-1 but produced a determined rally from sixth place to wear down the pace-tracking Arthur’s Ride and prevail by three-quarters of a length.

Instant Coffee reached the finish line in a snappy 1:22.77, easily besting the times of 1:23.68 and 1:23.58 posted in identical maiden special weights earlier in the afternoon. Instant Coffee has the pedigree to stretch out in distance for trainer Brad Cox and might be a stakes horse in the making.

National Treasure is bred to run long, so it was noteworthy to see the Bob Baffert-trained juvenile win his debut sprinting 6 1/2 furlongs on Saturday at Del Mar. The son of Quality Road dashed to the lead through fast fractions of 21.89 and 44.37 seconds, then kept going to defeat his experienced stablemate Massimo by 1 1/2 lengths in a solid 1:16.62.

Produced by the Medaglia d’Oro mare Treasure, National Treasure sold for $500,000 as a yearling and cranked out a bevy of fast workouts before his debut. There’s a lot of talent and potential here.

Bet these horses back and others with Pro Reports

Treason didn’t have the best luck competing on dirt and turf at Belmont Park and Saratoga last year, but the 4-year-old Josie Carroll trainee absolutely freaked when trying Tapeta off a nearly one-year layoff on Sunday at Woodbine. Making his first start as a gelding, Treason led by a minimum of 4 1/2 lengths at every call of a 1 1/16-mile allowance optional claimer, ultimately pulling clear to dominate by 16 1/2 lengths.

Treason hit the finish line in 1:41.51, breaking the track record. It appears we’re looking at a budding Tapeta star, and races such as the Oct. 8 Durham Cup (G3) and the Nov. 6 Autumn (G2) racing 1 1/16 miles over the Woodbine Tapeta could be ripe for conquest by Treason.

It was a performance for the ages. In the Pacific Classic (G1) at Del Mar, Flightline exceeded all expectations with an otherworldly display of dominance. Pressing and then setting fractions of 23.43 seconds, 46.06 seconds and 1:09.97 did nothing to tire the son of Tapit, who effortlessly extended his advantage around the turn and down the homestretch to win eased up by 19 1/4 lengths.

Flightline dashed the final two quarter-mile splits in 24.50 and 24.81 seconds, completing the 1 1/4-mile race in 1:59.28. His final time missed a 19-year-old track record by 0.17 seconds and produced a powerful 126 Beyer Speed Figure from the Daily Racing Form, the highest number since 2004. Any way you slice it, Flightline is a monster and the favorite to win the Breeders’ Cup Classic.

Lieutenant Dan didn’t receive an unencumbered trip, getting trapped behind the leaders and waiting for racing room. But after finding an opening along the rail, Lieutenant Dan shot through and sprinted the final furlong in about 11.3 seconds to win by 1 1/4 lengths in 55.87 seconds.

With this sharp comeback effort under his belt, Lieutenant Dan appears poised for a return trip to the Breeders’ Cup.

Shrugging off a subpar performance in the Whitney (G1) at Saratoga, Olympiad bounced back with a big performance in the Jockey Club Gold Cup (G1) over the same track, tracking slow early splits of 24.54 seconds, 49.70 and 1:13.47 before taking over to beat Grade 1 winner Americanrevolution by two lengths.

Olympiad finished up nicely, running the final two quarter-mile sections in about 23.81 and 24.75 seconds to complete 1 1/4 miles in 2:02.11 seconds. Olympiad has quietly won six races (five of them graded) this year and has a shot at Horse of the Year honors if he can steal the Breeders’ Cup Classic away from Flightline.

The Suburban (G2) winner failed to bring his A game in the Jockey Club Gold Cup, trailing the field through slow early fractions before passing a couple of rivals to finish sixth. Dynamic One definitely regressed while jumping into the Grade 1 ranks off a two-month break, but perhaps squaring off against easier company this fall can help him rebound.

First Captain was put to urging a long way from the Jockey Club Gold Cup finish line, but the stoutly bred son of Curlin never wavered and gradually gained ground to finish third, beaten 3 3/4 lengths. His closing fractions were solid, and First Captain should have every chance to win another stakes before the year is out, especially if he drops into Grade 2 or Grade 3 company.

War Like Goddess endured an unfortunate trip as the heavy favorite in the Glens Falls (G2) at Saratoga, racing near the back of the pack while buried in behind horses through incredibly slow fractions of 26.47 seconds, 53.29 seconds, 1:19.59 and 1:45.29. By the time War Like Goddess got out of traffic, it was too late to catch the talented pacesetter Virginia Joy, even though War Like Goddess blazed the final furlong in something like 10.7 seconds (a phenomenal fraction) to miss by a neck. This was a gallant try under challenging circumstances.