Horses to Watch: 9 entered at Del Mar and Saratoga 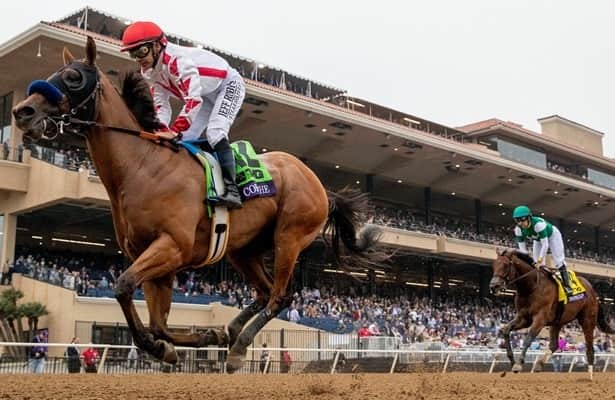 At long last, Corniche is back! The undefeated winner of the 2021 Breeders’ Cup Juvenile will belatedly kick off his 3-year-old campaign in Sunday’s ninth race at Saratoga, the Amsterdam (G2) (post time 5:34 p.m. EDT). The field has come up deep with a couple other Grade 1 winners in the mix, and Corniche is eligible to be a bit rusty off the extended break, but the Amsterdam is a good opportunity to see how Corniche stacks up against his fellow sophomores this summer.

A deep field has assembled for Saturday’s 10th race at Del Mar, the San Diego Handicap (G2) (post time 9:30 p.m.). Kentucky Derby winner Mandaloun and Group 1 Dubai World Cup hero Country Grammer are among the entrants, but don’t be too quick in dismissing Defunded from contention. The improving 4-year-old ran second in the Hollywood Gold Cup (G1) after carving out a fast pace over 1 1/4 miles, and cutting back to 1 1/16 miles might be more favorable for the Bob Baffert trainee.

Early Voting is a neck away from being perfect in four starts and he put his plentiful early speed to good use when springing an upset victory in the Preakness two months ago. Early Voting likes to race on or near the lead and figures to be part of a slow pace in Saturday’s ninth race at Saratoga, the Jim Dandy (G2) (post time 5:37 p.m.). Early Voting has already defeated key rival Epicenter and should be tough to catch at Saratoga.

Elector failed to fire in the Triple Bend (G2) at Santa Anita two months ago, finishing last by a wide margin. But the 4-year-old son of Constitution had previously won maiden and allowance races with encouraging Brisnet Speed ratings, so I’m optimistic he can rebound in Sunday’s second race at Del Mar, an $80,000 allowance optional claimer (post time 5:30 p.m.). Perhaps stretching out over one mile will help Elector work out a favorable trip setting or stalking an easy pace.

Epicenter couldn’t quite catch Early Voting when rallying to finish second by 1 1/4 lengths in the Preakness, but the talented and consistent sophomore has been a stakes star since last year, counting a decisive Louisiana Derby (G2) score and a runner-up finish in the Kentucky Derby on his record. If anyone can catch Early Voting in the Jim Dandy, it’s Epicenter, who has enough speed on his best day to be prominent from the outset.

Champion sprinter Jackie’s Warrior is undefeated in four starts at Saratoga, including a hard-fought victory over future Breeders’ Cup Dirt Mile winner Life Is Good in the 2021 H. Allen Jerkens Memorial (G1). Jackie’s Warrior remains in strong form and figures to pick up another victory at the Spa when he starts as an overwhelming favorite in Saturday’s eighth race at Saratoga, the Grade 1 Alfred G. Vanderbilt Handicap (post time 4:50 p.m.).

Twilight Gleaming has been a picture of consistency, cracking the exacta in all seven of her starts while counting the 2021 Breeders’ Cup Juvenile Turf Sprint as her signature victory. Now we’ll see how this speedy 3-year-old filly stacks up against older rivals when she starts in Friday’s sixth race at Del Mar, the Daisycutter Handicap (post time 9:27 p.m.). The similarly speedy 5-year-old Leggs Galore is a formidable opponent, but Twilight Gleaming is 4-for-5 over Friday’s five-furlong distance and should have every chance to win.

Our third watch list member entered in the Jim Dandy is Zandon, the stretch-running winner of the Blue Grass Stakes (G1). Zandon was beaten only 1 1/2 lengths when rallying to finish third in the Kentucky Derby, his fourth straight trifecta finish in a graded stakes. Zandon’s off-the-pace running style might be compromised if the Jim Dandy unfolds at a modest pace as expected, but on the bright side, he’s only run three times this year and might still be improving.