Horses to Watch: 8 to follow this weekend, plus 1 recent winner 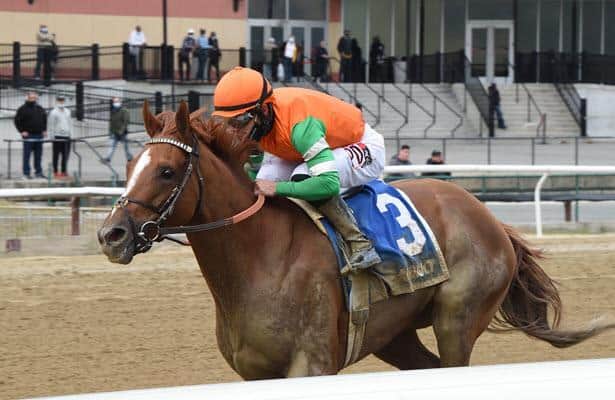 Jumping up into stakes company and running back on 10 days of rest made no difference to Amadevil in Wednesday’s Michal G. Mackey Memorial Angenora at Thistledown. The daughter of Dominus dueled the Grade 1-placed Esplanande into submission through fast fractions of 21.82 and 44.66, then drew off under a hand ride to win the six-furlong sprint by 6 3/4 lengths in 1:10.44.

Amadevil is now undefeated and unchallenged in four starts, hinting she might be good enough to compete against open company, not just fellow Ohio-breds.

Bunduki didn’t have a fair chance to win her debut in a seven-furlong maiden special weight at Ellis Park last month, considering the race elapsed with painfully slow early fractions of 23.97 and 48.15. Under the circumstances, Bunduki ran well to rally and finish third, beaten just 1 3/4 lengths by the pacesetters.

If Bunduki receives a fairer pace to work with in Friday’s sixth race at Ellis Park, a one-mile maiden special weight (post time 4:10 p.m. EDT), she can vie for victory at a fair price. Keep in mind, Bunduki is trained by Kenny McPeek, whose runners often improve off their debuts.

Exciting news—Flightline is back! The John Sadler trainee was spectacular in his April 24 debut sprinting six furlongs at Santa Anita, leading all the way to trounce his rivals by 13 1/4 lengths. His blazing final time of 1:08.75 translated to a 105 Brisnet Speed rating.

Flightline will finally make his long-awaited second start in Sunday’s eighth race at Del Mar, a six-furlong allowance optional claimer (post time 8:00 p.m.). There are some good horses in the field, but none have run as fast as Flightline, who has been training up a storm in preparation for his return. Another flashy victory will be widely expected from the $1 million yearling acquisition.

Winner of the Discovery (G3) in 2020, Forza Di Oro has drawn the rail in the Jockey Club Gold Cup, a race with very little speed on paper. Forza Di Oro should be tactical enough to secure an easy lead in his second run of the season, and from there, the improving son of Speightstown can make his Grade 1 debut a winning one.

Did you happen to see Great Island’s victory in the July 17 Matchmaker (G3) at Monmouth Park? The daughter of Scat Daddy somehow gained 4 1/2 lengths through the final furlong to get up and win the 1 1/8-mile turf test by half a length.

Great Island is a powerful finisher on her best day, suggesting she’ll enjoy the chance to stretch out over 1 3/8 miles in Saturday’s 11th race at Saratoga, the Flower Bowl (G1, post time 6:11 p.m.). The Chad Brown trainee looms as a logical contender in a quality field.

One of Forza Di Oro’s key rivals in the Jockey Club Gold Cup is Happy Saver, defending winner of the 1 1/4-mile race. Happy Saver suffered his first defeat from six starts when beaten to third place in the Suburban (G2) at Belmont two months ago, but the Todd Pletcher trainee didn’t seem to bring his A-game over a sloppy track. Perhaps he can rebound over (presumably) dry footing this Saturday.

Fourth by half a length in the Oceanside, second by a head in an allowance optional claimer, Hockey Dad has suffered a couple of frustrating defeats during the Del Mar summer meet, but maybe he can turn things around in Saturday’s 11th race at Del Mar, the Del Mar Derby (G2, post time 9:37 p.m).

A full field of 14 is set to face the starter, and the key contenders appear evenly matched in terms of form lines and Brisnet Speed ratings. Hockey Dad’s front-running speed may help him stay out of traffic and outrun expectations as a mid-range longshot. Dropping blinkers can also help the son of Nyquist find the improvement he needs to prevail.

Who is the most accomplished filly entered in Sunday’s 11th race at Saratoga, the Spinaway (G1, post time 6:11 p.m.)? That would be Pretty Birdie, who wired her debut at Churchill Downs before battling to a two-length score in the Schuylerville (G3) at Saratoga.

There are many promising maiden winners entered in the Spinaway field, so victory isn’t guaranteed for Pretty Birdie. But if proven class counts for anything, Pretty Birdie has to be respected in her Grade 1 debut.

If Great Island is going to win the Flower Bowl, she’ll have to reckon with War Like Goddess, a stoutly bred filly with a perfect 4-for-4 record running 1 3/8 miles or farther. Coming off consecutive victories in the Orchid (G3), Bewitch (G3), and Glens Falls (G2), War Like Goddess looms among the early favorites for the Breeders’ Cup Filly & Mare Turf and will be very tough to deny in the Flower Bowl. Her wicked turn-of-foot just keeps getting sharper.