Horses to Watch: 8 impressive runners worth your attention 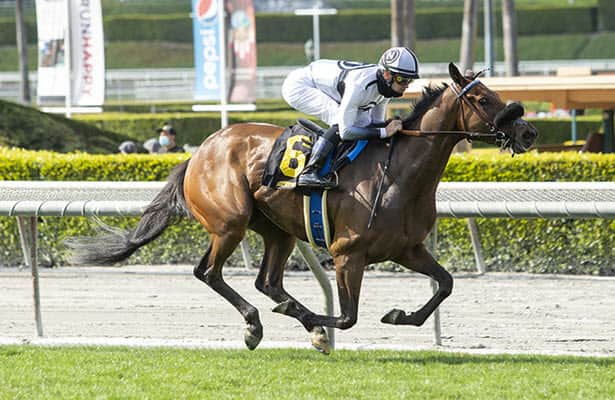 As a son of Kentucky Derby winner Street Sense out of a mare by two-time Breeders’ Cup Classic winner Tiznow, Murray has the pedigree to excel running one mile or farther. That’s why it was exciting to see the Bob Baffert trainee dominate his debut sprinting 5 1/2 furlongs on Sunday at Del Mar.

The dark bay 2-year-old was tons the best while facing five rivals. After tracking a fast opening quarter-mile in :21.54, Murray seized command through a half mile in :45.83 and widened his advantage down the lane to romp by 10 3/4 lengths.

Murray reached the finish line in 1:04.37 while cruising at the finish. Could the Del Mar Futurity (G1) be next on the agenda?

Could Sea Dreamer be a 3-year-old filly on the rise for trainer Simon Callaghan? After finishing second in her June 20 debut at Santa Anita, the daughter of Into Mischief was easily the best in a 6 1/2-furlong maiden special weight on Saturday at Del Mar.

With Flavien Prat aboard, Sea Dreamer took command at the start and never looked back, gradually widening her advantage through splits of :22.50, :45.85, and 1:10.67 to score by 9 1/2 lengths in 1:17.14. She was hardly encouraged at all down the lane and might prove to be graded stakes caliber.

Pizza Bianca was ready to deliver in a 1 1/16-mile maiden special weight over the Saratoga turf course on Thursday. The Christophe Clement trainee didn’t show much speed in the early going, dropping back to last place through modest splits of :24.88, :50.53, and 1:15.70 over a good course. But when the real running began, Pizza Bianca unleashed a sharp finish, rallying boldly under Joel Rosario to beat odds-on favorite Expand the Map by three-quarters of a length in 1:46.88.

MANGIA! 2YO Pizza Bianca eats up the field and breaks her maiden in the 5th with @JRosarioJockey for @clementstable and @bflay! #Saratoga pic.twitter.com/KsRETKh88E

A daughter of Fastnet Rock out of a Galileo mare, Pizza Bianca has the pedigree of a top-class turf star and looks like an early contender for the Breeders’ Cup Juvenile Fillies Turf.

Fired off her typical strong effort in the San Clemente (G2) at Del Mar, rallying from 10 lengths behind a fast :45.86 half-mile fraction to vie for victory down the homestretch. But Going Global was out-kicked in the final furlong by three-time stakes winner Madone, who prevailed by half a length while completing the one-mile turf test in 1:35.28.

It was a close finish, and Going Global had to wait in traffic at a key moment around the far turn, so there’s no reason to think Going Global can’t turn the tables in the Del Mar Oaks (G1) next month.

Tried hard to win the Coaching Club American Oaks (G1) at Saratoga, but after leading for most of the journey, she succumbed in the final strides to finish second by a head. The race came back with a reasonably quick final time of 1:49.29 for 1 1/8 miles, and Malathaat was shifting from the stretch-running tactics she employed in her three graded stakes wins, so we won’t judge her first career defeat too harshly. She never got a chance to relax as the race unfolded and can rebound with a return to closing tactics in the Alabama (G1) next month.

Ran respectably in the Lake George (G3) at Saratoga, rallying from a few lengths off the pace to finish third by 1 1/2 lengths. But her record now stands at 3-for-3 in 5 1/2-furlong sprints and 0-for-4 over all other distances, so I think Tobys Heart can return to the winner’s circle if she cuts back in trip later this summer.

Five wins and two seconds from seven starts on turf. Beantown Baby has turned into a formidable turf sprinter and can become a stakes winner when she starts in Monday’s seventh race at Colonial Downs, the Andy Guest Stakes (post time 4:33 p.m. EDT).

The Andy Guest will provide a perfect test of Beantown Baby’s abilities. The Arnaud Delacour trainee will square off against 11 rivals, and she isn’t a standout in terms of Brisnet Speed ratings. But she has tactical speed and is versatile in terms of running style, so a clean trip should be in the offing. If Beantown Baby makes her stakes debut a winning one, there’s no telling how high this former claimer might eventually rise.

At long last, Stellar Sound is back in the entries. The seemingly delicate 4-year-old filly kicks off her 2021 campaign in Thursday’s second race at Del Mar, a six-furlong allowance optional claiming race (post time 5:30 p.m. EDT).

Stellar Sound was last seen in December 2020, when she finished a deceptively good third in the 1 1/16-mile Bayakoa (G3) at Los Alamitos. After breaking slowly, the daughter of Tapit unleashed a sweeping burst of acceleration around the first turn to race up and seize a daylight lead. The move was probably premature, and Stellar Sound understandably weakened down the lane to finish third.

Head to head Proud Emma sweeps the victory over Message in the GIII Bayakoa Stakes pic.twitter.com/zurJaAAgXM

Sprinting six furlongs off a long layoff won’t necessarily be a winning recipe for Stellar Sound, especially since she is facing Argentinean Group 1 winner Scotish Star and Spring Fever Stakes winner Bella Vita. Sunday’s sprint is probably more of a starting point for Stellar Sound than anything else, but I’m still excited to see what she can accomplish off the layoff.

Carved out the pace in the Lake George but faded through the homestretch to finish a distant eighth. After two sub-par efforts in a row, I’ll drop Jouster from my watch list and wait for her to rebound before betting her again.