Horses to Watch: 7 to keep and 3 to drop 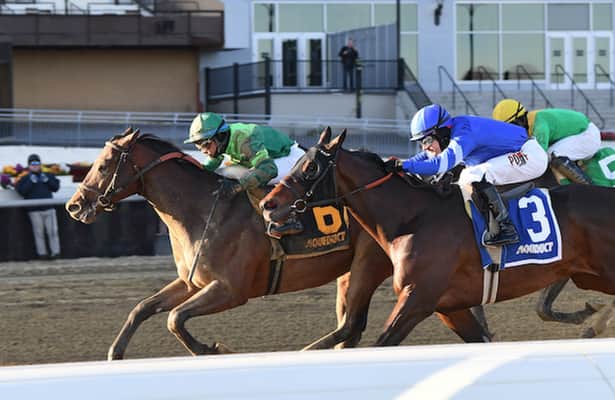 A son of late-maturing Breeders’ Cup Classic winner Arrogate, Got Thunder probably was not ready to deliver his absolute best in a six-furlong maiden special weight on Sunday at Del Mar, Nevertheless, the John Sadler-trained juvenile ran strongly, dueling for the early lead through hot fractions of 22.00 and 44.82 seconds before battling on to finish second, beaten 1 1/2 lengths by the fast-working Bob Baffert trainee Newgrange.

The final time was a quick 1:10.25 seconds, and since Got Thunder is bred to improve with maturity and relish running long, I am excited to see what he can accomplish in the future. Who knows? We might be looking at a Kentucky Derby type.

A beautifully bred son of Curlin out of a Bernardini mare, Miles D always has had the pedigree to improve with maturity and thrive running long. And if his victory in the Discovery (G3) at Aqueduct is any indication, Miles D is living up to his breeding.

Miles D showed promise during the summer, running second in the Curlin and third in the Travers (G1) at Saratoga, but the Chad Brown trainee has taken a definite step forward this fall. A rallying victory against older rivals in a 1 1/16-mile allowance at Belmont set the stage for the Discovery, in which Miles D settled behind slow fractions before rallying resolutely down the lane to beat heavy favorite Speaker’s Corner by half a length.

Miles D completed the 1 1/8-mile race in 1:52.44, which translated to an encouraging 102 Beyer speed figure. I do not believe we have seen the best Miles D has to offer yet – he still has upside for improvement at age 4, setting the stage for a big season in 2022.

The above-mentioned Newgrange fired off a big effort to defeat Got Thunder in Sunday’s six-furlong maiden special weight at Del Mar. Always involved through those fast opening fractions, Newgrange gradually edged away down the homestretch to win in fine fashion.

A son of juvenile Grade 1 winner Violence out of a mare by Belmont Stakes hero Empire Maker, Newgrange has the pedigree to develop into a classics contender, stamping the dark bay colt as an exciting prospect for 2022.

Trainer Kenny McPeek rarely saddles winning first-time starters, so when Smile Happy dominated his Oct. 29 debut racing 1 1/16 miles at Keeneland by 5 1/2 lengths, it was a sign that the son of Runhappy might be something special.

Smile Happy reiterated his abundant potential with a powerful performance in the Kentucky Jockey Club (G2) Saturday at Churchill Downs. After rating back in fifth place, the dark bay colt rallied boldly around the far turn and down the homestretch, kicking clear with authority to trounce the Grade 1-placed Classic Causeway by 3 1/4 lengths.

Smile Happy finished fast, sprinting the final 5/16 of a mile in 30.69 seconds to complete the 1 1/16-mile race in a solid 1:43.94. The future looks bright for Smile Happy, whose victory secured 10 qualification points on the Road to the Kentucky Derby.

A Godolphin homebred trained by Bill Mott, Cody’s Wish picked up his third straight victory when rallying to a sharp one-mile allowance triumph on Sunday at Churchill Downs.

Favored at 9-10 off a Nov. 6 allowance score at Churchill, Cody’s Wish was content to race off the pace on Sunday, dropping back to eighth place through an opening quarter mile in 23.04 seconds. But the son of Curlin advanced steadily through a half mile in 46.29 seconds and was only a neck off the lead following six furlongs in 1:10.55 seconds.

At that point, Cody’s Wish turned on the afterburners, accelerating the final quarter mile in about 24.35 seconds to edge clear and prevail by a length in 1:34.94. Produced by the Grade 1-winning Tapit mare Dance Card, Cody’s Wish is bred to improve with maturity and has the potential to develop into a graded-stakes star (maybe even a Grade 1 winner?) in 2022.

I will admit Sandstone ran well below expectations in the Golden Rod (G2) at Churchill Downs. Favored at 4-5, the daughter of Street Sense tracked a steady pace from second place and challenged around the far turn, only to unexpectedly give way down the lane and finish third by 4 1/4 lengths. But since this marked a sharp regression from Sandstone’s previous blowout victories, I will not drop Sandstone from my Watch List just yet – I will wait and see if the Kenny McPeek trainee bounces back next time.

Although Speaker’s Corner lost to Miles D when favored at 7-10 in the Discovery, I won’t judge his effort too harshly. He was beaten only half a length while running a bit roughly down the homestretch, drifting out and changing leads late. The race came back fast, and the top three finishers pulled well clear of Wood Memorial (G2) winner Bourbonic, suggesting that Speaker’s Corner ran better than it appears at first glance.

This stretch-running sophomore never really factored when facing older rivals in the Clark (G1) at Churchill Downs, rating in seventh place before passing a couple of rivals to finish fifth by 10 lengths. While I still believe the son of Curlin has long-term potential, I will want to see a bit more forward progression before returning him to my watch list.

After settling a few lengths off a slow pace in the Long Island (G3) at Aqueduct, La Dragontea failed to kick on down the homestretch, settling for third place by 2 3/4 lengths against stretch-running stablemate Mutamakina. Perhaps the 1 1/2-mile trip stretched the limits of La Dragontea’s stamina, in which case a cutback in distance could help her rebound next time. But I want to see La Dragontea show a bit more spark before returning her to my watch list.

Favored at 19-10 to pick up a fourth straight graded victory in the Hollywood Derby (G1) at Del Mar, Public Sector could not quite get the job done. After saving ground in midfield, Public Sector shifted outside and gained 3 1/2 lengths through a quick final furlong, but he ultimately came home fourth by 1 1/2 lengths. The winner benefited from carving out a modest pace, but runner-up Santin outkicked Public Sector through the final furlong, so it is hard to blame Public Sector’s defeat exclusively on the slow early/fast late race shape. I want to see how Public Sector fares next time before giving him another try.