Horses to Watch: 7 on and 3 off from Preakness week 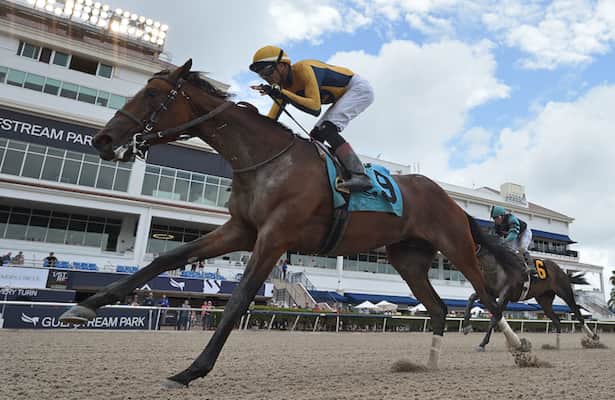 History basically repeated itself on Friday at Gulfstream when Casse sent out Pappacap’s half-brother Boppy O to win a five-furlong maiden special weight. The son of Bolt d’Oro settled in fourth place early on, then launched a four-wide rally to take command and win by 1 1/2 lengths in 58.71 seconds. Only time will tell whether Boppy O can follow in Pappacap’s footsteps, but he’s certainly off to a promising start.

Godolphin homebred Caramel Swirl wrapped up her 3-year-old season on a high note last fall, battling to victory in the seven-furlong Raven Run (G3) at Keeneland. And suffice to say, the daughter of Union Rags picked up right where she left off in a seven-furlong allowance optional claimer Friday at Belmont Park.

Favored at 2-5 while facing four rivals, Caramel Swirl tracked modest early fractions of 23.19 and 46.72 seconds before seizing command and powering clear to win by 3 3/4 lengths in 1:23.14. A return to graded-stakes company is surely in the future for Caramel Swirl, who is trained by Bill Mott.

Pulled off a beautiful trip to win the Preakness at Pimlico, tracking splits of 24.32, 47.44 and 1:11.50 before rocketing the fourth quarter-mile in about 24 seconds to seize a clear lead. In front by 3 1/2 lengths passing the furlong marker, Early Voting stayed on gamely despite drifting around and won by 1 1/4 lengths in the snappy time of 1:54.54.

Early Voting is a neck away from being undefeated in four starts and is emerging as a division leader for trainer Chad Brown.

The stamina-packed pedigree of First Captain paid great dividends in the Pimlico Special (G3) at Pimlico. After racing off the pace through slow splits of 24.99, 49.80 and 1:14.27, the son of Curlin unleashed a powerful rally down the homestretch of the 1 3/16-mile race, getting up in the final strides to win by a head in 1:56.24.

First Captain’s powerful rally wasn’t an illusion; he was actually accelerating strongly and ran the final three-sixteenths of a mile in something like 17.4 seconds, a terrific fraction. The future is bright for First Captain, who is finally delivering on his $1.5 million purchase price.

Last year’s Breeders’ Cup Juvenile Fillies Turf heroine was much the best in the Hilltop at Pimlico, surging from 16 lengths off the early pace to trounce her rivals by 1 3/4 lengths. The Christophe Clement trainee completed one mile on turf in 1:36.54 seconds and could be bound for a start at Royal Ascot in England next month.

Broke a bit slowly in the Preakness, then got squeezed between rivals and dropped back to eighth place. Despite this challenging departure from his usual forwardly placed tactics, Epicenter never stopped trying and unleashing a determined rally up the rail, gaining 2 3/4 lengths in the final furlong alone to finish second by 1 1/4 lengths. This was another strong performance from a highly talented colt.

Didn’t get the best trip by any means in the Preakness, checking in traffic early and dropping back to last place before unleashing a wide rally on the far turn. Secret Oath fought on to finish fourth in a deceptively good performance. Returning to the filly ranks next time should help her rebound.

Had every opportunity to win the Black-Eyed Susan (G2) at Pimlico, but couldn’t quite chase down the pace-tracking winner Interstatedaydream, closing ground mildly to finish second by 1 1/4 lengths. This was a solid run, but the Black-Eyed Susan wasn’t the fastest race on paper, and Adare Manor’s forward progression seems to have stalled for the time being.

Ran well in the Gallorette (G3) at Pimlico, rallying from behind a modest pace to finish second. But Crystal Cliffs was losing ground late against a gate-to-wire winner, and at this point she seems to have reached her potential as a listed stakes/Grade 3 type. I’ll wait and see whether she steps forward this summer before playing her again.

Reportedly bled when finishing sixth in the Preakness and will be given time off to recover. I’ll wait to see how Simplification bounces back before returning him to my Watch List.