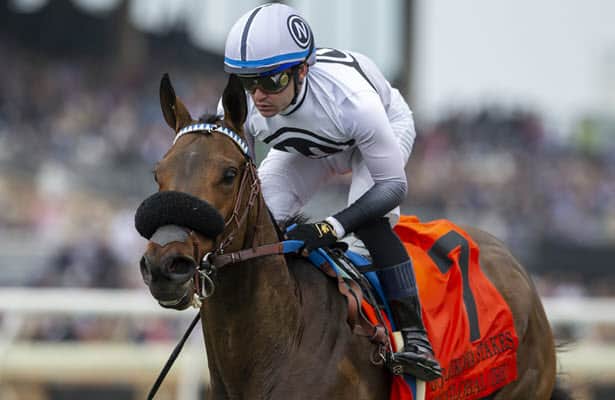 Fresh off a decisive victory in a one-mile allowance optional claimer to kick off 2022, Defunded will step up in class for Monday’s fourth race at Santa Anita, the Hollywood Gold Cup (G1, post time 5:30 p.m. EDT).

Defunded has actually won two straight allowance heats, having dominated a 1 1/16-mile event at Del Mar to conclude his 2021 campaign. Placed twice at the Grade 3 level, Defunded is tackling a much longer 1 1/4-mile trip in the Hollywood Gold Cup. But the improving gelding is facing only four rivals and enters off a sharp five-furlong workout, so don’t dismiss Defunded from win consideration.

Elector is a promising 4-year-old on the rise for trainer John Sadler. The son of Constitution finished seventh in his debut at Santa Anita last December, but has since rattled off two straight victories, dominating a seven-furlong allowance by 4 3/4 lengths before wiring a 6 1/2-furlong allowance optional claimer by 1 1/2 lengths.

These promising efforts have stamped Elector as one of the favorites to win Sunday’s fourth race at Santa Anita, the Grade 2 Triple Bend (post time 5:36 p.m. EDT). He’ll have to reckon with the formidable speedster Brickyard Ride (who enters off four straight stakes wins), but on raw talent and potential Elector has to be respected.

Let’s face it–Going Global is pretty much a beast. The 4-year-old filly has won seven turf stakes since arriving in the United States (including the Grade 1 Del Mar Oaks), and she looked as sharp as ever when starting 2022 with a comfortable victory in the Grade 2 Royal Heroine at Santa Anita.

Going Global has a strong chance to keep her momentum going in Monday’s 10th race at Santa Anita, the Grade 1 Gamely (post time 8:30 p.m. EDT). She’s 5-for-5 over the Santa Anita turf course and will be guided by hot jockey Flavien Prat (who won six stakes aboard Going Global last year), setting the stage for victory.

If anyone can upset Going Global in the Gamely, it’s probably Ocean Road. The sixth-place finisher from the 2021 Breeders’ Cup Filly & Mare Turf started 2022 on an impressive note at Keeneland, finishing powerfully from behind a pedestrian pace to win a 1 1/8-mile allowance.

A beautifully bred daughter of Australia out of the Theatrical mare Love and Laughter, Ocean Road has lots of upside for improvement and figures to be rallying fast down the Santa Anita homestretch. A bright future appears to be on the horizon.

Three starts, three victories. Sayyaaf has been unstoppable since returning from a long layoff earlier this year, rattling off three consecutive triumphs sprinting five furlongs over the Tapeta and turf surfaces at Gulfstream Park.

Sayyaaf will attempt to keep his momentum going in Saturday’s 10th race at Gulfstream, a $25,000 allowance optional claimer (post time 5:47 p.m. EDT). The Mike Maker trainee has already won over this class level twice this year, and the conditions of Saturday’s heat (five furlongs on turf) should be perfectly suitable. A fourth straight victory could be in the offing.

Sconsin dominated this race by 3 1/4 lengths in 2021 and was last seen defeating Grade 1 winner Bell’s the One in the Sept. 18 Open Mind at Churchill. Sconsin is returning from a long layoff, but she’s only facing five rivals in the Winning Colors, so her class (and affinity for Churchill Downs) may prove sufficient to win the day.

One of the most formidable contenders in the Monday’s 12th race at Lone Star Park, the Grade 3 Steve Sexton Mile (post time 8:35 p.m. EDT) is Shaaz, a 4-year-old son of Uncle Mo. The $1.1 million auction acquisition is undefeated in three starts, including a flashy 2 3/4-length triumph in a $100,000 allowance optional claimer racing one mile at Santa Anita two months ago.

Shaaz has been training sharply for his stakes debut and brings promising Brisnet Speed ratings to the table, so it’s easy to understand why he’s the 2-1 morning line favorite. There’s a lot of talent in the Steve Sexton field, but Shaaz seems destined to be fighting for victory down the homestretch.

Which horses do you have your eyes on this weekend?