Horses to Watch: 5 to follow after weekend races, 1 to drop 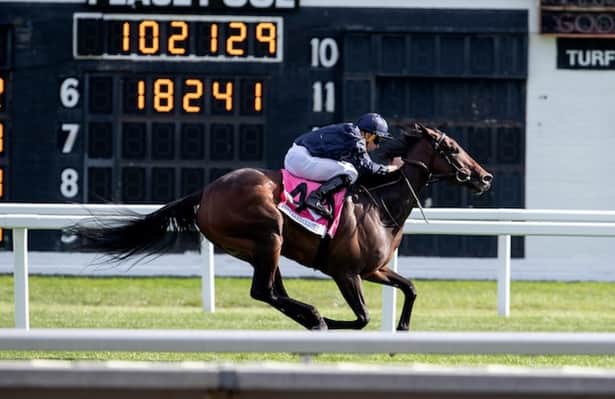 In case you haven’t noticed, Aidan O’Brien’s 3-year-old filly Santa Barbara has turned into a monster. Fresh off an impressive victory in the Belmont Oaks (G1), where she overcame significant traffic to snatch a victory, Santa Barbara followed up with a romp over older rivals in the Beverly D. Stakes (G1) at Arlington Park.

Santa Barbara finished fast down the lane, and her runaway victory is all the more impressive when you consider how runner-up Mean Mary is a five-time graded stakes winner. Santa Barbara has emerged as an early favorite for the Breeders’ Cup Filly & Mare Turf (G1), and if she keeps improving with maturity, there’s no telling what she might achieve.

Speaker’s Corner subsequently spent 10 months on the sidelines, but the Bill Mott trainee showed no signs of rust when returning to action in a seven-furlong allowance on Saturday at Saratoga. After settling in fourth place through a :22.97 opening quarter, Speaker’s Corner rallied into the teeth of a :45.86 half mile, took command through six furlongs in 1:09.86, and finally powered clear to win by 5 1/4 lengths in 1:22.29.

This was a huge effort, especially when you consider how Speaker’s Corner is a stoutly bred son of Kentucky Derby winner Street Sense out of a mare by Preakness Stakes winner Bernardini. Longer distances should be well within reach for Speaker’s Corner, who has to rank among the most exciting sophomores in training.

Absolutely ran too good to lose in the Mr. D. Stakes (G1) at Arlington Park. Favored at 2-5 off victories in the Turf Classic (G1) and Manhattan Stakes (G1), Domestic Spending spent much of the Mr. D. racing in fourth place as long-shot leader Two Emmys carved out pedestrian fractions of :26.12, :52.43, and 1:16.64.

#TwoEmmys pulls off a HUGE upset with a win in the Mister D. Stakes (G1) from @Arlington_Park under @James_D_Graham.

Under the circumstances, Domestic Spending ran well to gain 1 3/4 lengths through a :22.72 final quarter and finish second by a neck. The son of English Channel was flying at the finish and might have won with a better pace setup, so we’ll look for him to bounce back next time.

Much like Domestic Spending, Set Piece ran a strong race under challenging circumstances in the Fourstardave Hanidcap (G1) at Saratoga. The Juddmonte Farms homebred was a bit slow into stride and trailed the field through steady but unremarkable splits of :23.45, :46.69, and 1:10.12.

Set Piece was full of run down the homestretch, but the last quarter-mile elapsed in a quick :22.97, making it difficult for Set Piece to catch up. Nevertheless, he gained 3 3/4 lengths through the final two furlongs to finish second by just 1 1/2 lengths against the multiple Grade 1-winning mare Got Stormy.

This was a solid effort for Set Piece’s Grade 1 debut, especially since he dashed his own final quarter in approximately :22.32. I think there’s a strong chance we’ll see this Brad Cox trainee back in the winner’s circle next time.

Failed to seriously threaten in the Ellis Park Juvenile Stakes at Ellis Park, rallying mildly from a trailing position to finish fourth by 6 3/4 lengths. The race shape didn’t exactly suit his deep-closing style (the final three furlongs of the seven-furlong dash elapsed in a solid :36.68), but Texas Red Hot was losing ground on the top three down the lane, and I’ll want to see how he fares next time before returning him to my watch list.

Two starts, two blowout victories. Averly Jane has yet to be challenged for trainer Wesley Ward, winning her debut at Keeneland by 8 3/4 lengths before beating males by 3 1/4 lengths in the Kentucky Juvenile Stakes.

That man again Wesley Ward with another feature two year old winner as Averly Jane stylishly claims the Kentucky Juvenile Stakes under @Tyler_Gaff. She looks to be a filly going places! pic.twitter.com/GmBGvNybLD

These efforts stamp Averly Jane as a logical threat to win Wednesday’s ninth race at Saratoga, the Bolton Landing Stakes (post time 5:39 p.m. EDT). The 5 1/2-furlong sprint for juveniles is slated to take place on turf, and Averly Jane is entered for the main track only. But with rain a possibility for Tuesday and Wednesday at Saratoga, there’s a real chance the Bolton Landing will be transferred to dirt, leaving Averly Jane as the runner to beat.