Horses to Watch: 5 for this weekend at Aqueduct and Los Al 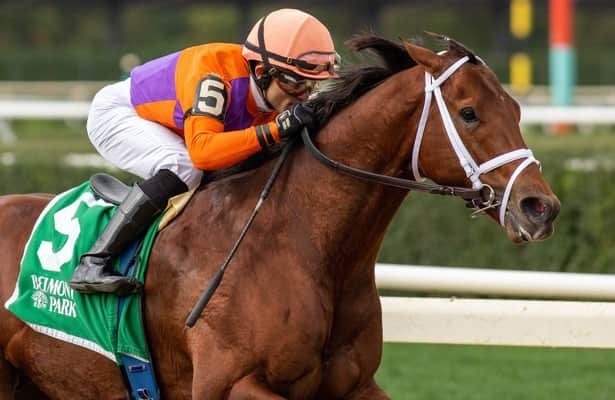 A daughter of Munnings conditioned by Bob Baffert, Eda has come to hand impressively this fall. Bouncing back from a fifth-place finish in the Del Mar Debutante (G1), Eda has rattled off back-to-back sprint stakes wins, nabbing Santa Anita’s Anoakia by 2 1/4 lengths before dominating Del Mar’s Desi Arnaz by 4 1/4 lengths.

Now Eda will attempt to str eda etch her speed around two turns in Saturday’s eighth race at Los Alamitos, the Starlet (G1, post time 7:00 p.m. EST). The 1 1/16-mile distance is a question mark, but Eda looms as the clearest speed horse in a race without much pace on paper, so she may secure an uncontested lead. Don’t be surprised if Eda picks up a third straight stakes win this Saturday.

Surely Following Sea has the talent to win a Grade 1 race? The son of Runhappy has placed three times at the Grade 1 level, most recently when coming home third by 1 1/2 lengths in the Breeders’ Cup Sprint. And Following Sea has already proven his worth against Grade 2 company, beating veteran sprinter Firenze Fire by a decisive 4 3/4 lengths in the Vosburgh (G2) at Belmont Park.

Following Sea will receive another opportunity to snatch a Grade 1 when squaring off against seven rivals in Saturday’s 10th race at Aqueduct, the Cigar Mile Handicap (post time 4:13 p.m.). The field is deep, and the one-mile distance may stretch the limits of Following Sea’s stamina. But he figures to save ground while breaking from the rail, and his best Brisnet Speed ratings are competitive, so don’t count this versatile sophomore out of the mix. He can run well from anywhere in the pack.

One of Following Sea’s key rivals in the Cigar Mile is Ginobili, fresh off a runner-up effort in the Breeders’ Cup Dirt Mile. The 4-year-old gelding has developed into a beast since adding blinkers at Del Mar during the summer; his Breeders’ Cup effort was preceded by a blowout one-mile allowance win and a decisive 1 3/4-length score in the Pat O’Brien (G2).

The question is, should Ginobili’s improvement be attributed to blinkers, an affinity for Del Mar, or improvement with maturity? There’s no way to know for certain, but we’ll get a clearer idea when Ginobili ships across the country for the Cigar Mile. If he can produce his A-game away from Del Mar, he’ll have ample options for a productive 2022 campaign.

A deep field has assembled for Sunday’s ninth race at Los Alamitos, the Bayakoa (G3, post time 7:30 p.m.). Graded stakes winners As Time Goes By, Harvest Moon, and Warren’s Showtime are among the accomplished 4-year-old fillies entered in the 1 1/16-mile event.

But it’s possible the sophomore filly Moonlight d’Oro can beat them all. The stoutly bred daughter of Medaglia d’Oro showed promise during the winter, breaking her maiden at Los Alamitos before posting a comfortable victory in the Las Virgenes (G3) at Santa Anita.

Moonlight d’Oro ran well when returning from an injury-induced layoff in the one-mile Seashell at Del Mar last month, finishing second by 1 1/2 lengths. If she takes a step forward in her second start back, Moonlight d’Oro can vie for victory at a fair price.

One month ago at Belmont Park, Nest failed by less than a length to win the one-mile Tempted, gaining 2 3/4 lengths through the final furlong to finish third in a three-horse driving finish. She had previously romped by five lengths in a 1 1/16-mile maiden special weight at Belmont Park.

These performances suggest Nest will relish stretching out over 1 1/8 miles in Saturday’s ninth race at Aqueduct, the Demoiselle (G2, post time 3:43 p.m.). As a daughter of Curlin out of the A.P. Indy mare Marion Ravenwood, Nest is a full sister to 1 1/4-mile Santa Anita Handicap (G1) winner Idol, so she’s bred to improve with distance and maturity. Nest is also versatile in terms of running style, setting the stage for a winning performance in her graded stakes debut.