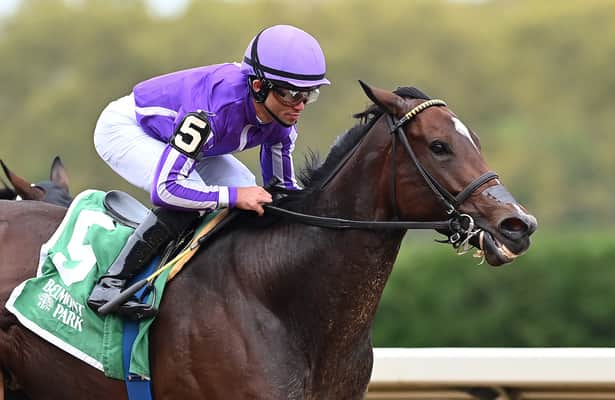 It wasn’t the flashiest victory at first glance, but Kimari ran like a serious Breeders’ Cup Filly & Mare Sprint contender when forging to victory in the 6 1/2-furlong Gallant Bloom (G2) at Belmont at the Big A (Aqueduct).

Favored at 3-5 off a victory in the Honorable Miss Handicap (G2) at Saratoga, Kimari didn’t receive a favorable pace setup in the Gallant Bloom. The daughter of Munnings found herself racing wide and 1 1/2 lengths off the lead as Lady Rocket set modest fractions of 23.55 and 46.98 seconds.

The last time Lady Rocket ran at Aqueduct, she obliterated the Go for Wand Handicap (G3) by nine lengths, so Kimari faced a challenging task running down Lady Rocket off an uninspiring pace. But Kimari dug deep and got the job done, running the third quarter-mile in a strong 23.26 seconds and the final sixteenth in a snappy 6.09 seconds (both according to Trakus) to win by 1 1/4 lengths in 1:16.58.

Last year, Kimari won the Madison (G1) sprinting seven furlongs at Keeneland, and she’ll return to that configuration for the Breeders’ Cup Filly & Mare Sprint. I definitely want her on my watch list come November.

I feel like I’m joining the Society bandwagon one race too late, but after her blowout victory in the Cotillion (G1) at Parx Racing, I believe this 3-year-old filly might be something special.

Entering off a runaway 6 3/4-length score in the seven-furlong Charles Town Oaks (G3), Society never gave her rivals a chance in the Cotillion. Stretching out over 1 1/16 miles proved to be no obstacle as Society dashed to the front through early fractions of 23.33 and 46.75 seconds, opened a six-length advantage through six furlongs in 1:10.93 seconds and cruised home on top by 5 3/4 lengths.

Society defeated a deep field (including Kentucky Oaks winner Secret Oath) in the quick time of 1:42.94 for 1 1/16 miles, earning a 100 Beyer speed figure from the Daily Racing Form. That ranks as the co-second-highest figure assigned to a 3-year-old filly this season, trailing only the 104 Beyer posted by Nest in the Coaching Club American Oaks (G1).

Society suffered her lone defeat from six starts when finishing fourth in the Coaching Club American Oaks (G1), but a stumbling start compromised her chances, and she’s clearly improved since then. The Breeders’ Cup Distaff looks like a viable goal for this exciting Steve Asmussen trainee.

Last year’s champion 2-year-old filly returned to her winning ways in the Dogwood (G3) at Churchill Downs. Racing for the first time since finishing fourth in the May 6 Kentucky Oaks, Echo Zulu rebounded impressively from her lone career defeat, dashing to the lead through fractions of 22.92 and 45.82 seconds before powering clear to dominate the seven-furlong dash by 5 1/4 lengths in 1:22.43 seconds. Could the Breeders’ Cup Filly & Mare Sprint be a viable goal for the daughter of Gun Runner?

#1 Echo Zulu (1/2) returns a dominant winner in the Dogwood Stakes (G3) from @ChurchillDowns with @RSantana_Jr up for Steve Asmussen.

The Santa Anita Derby (G1) winner rebounded to peak form with an impressive victory in the Pennsylvania Derby (G1) at Parx Racing. Facing a deep field including Grade 1 winners Zandon, Cyberknife and White Abarrio, Taiba was never farther than two lengths behind fractions of 23.37, 47.21 and 1:11.06 before seizing command and drawing clear to dominate the 1 1/8-mile race by three lengths in 1:48.67. The Breeders’ Cup Classic is likely next on the agenda for this improving son of Gun Runner.

It’s been a while since Zandon visited the winner’s circle, but he’s been competing with aplomb against tough competition and ran well again in the Pennsylvania Derby, rallying from nine lengths off the early pace to finish second behind Taiba. Zandon pulled 3 3/4 lengths clear of two-time Grade 1 winner Cyberknife and remains a formidable player in the 3-year-old division.

Couldn’t quite keep pace with Grade 1 winner Gunite in the Harrods Creek at Churchill Downs, weakening after setting the pace to finish second by three lengths. Conagher is a capable sprinter, but I don’t necessarily expect him to improve in the immediate future, so I’ll drop him from my watch list for the time being.

Cleaning up my watch list a bit, I’m removing the talented Gamely (G1) winner Ocean Road, who retired in July because of a ligament injury. Here’s hoping her Grade 1 racing class translates to abundant success as a broodmare.

Flattened out after launching a far-turn rally in the Cotillion (G1) at Parx, finishing a distant third behind runaway winner Society. Secret Oath has been a productive member of my watch list, but after four straight defeats, she’s not quite the winning machine she was during the winter and spring.