Horses to Watch: 4 new names plus 8 to keep 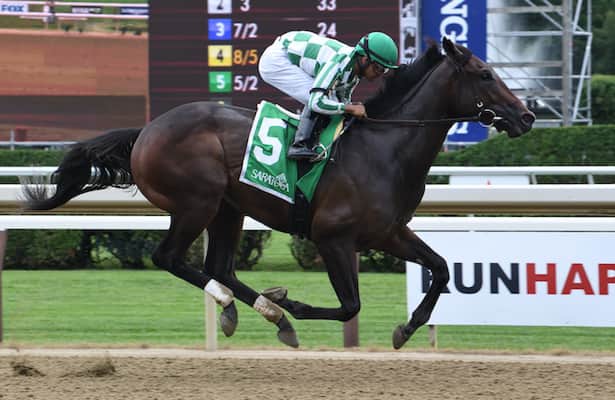 Trainer Shug McGaughey isn’t really known for cranking his juveniles to win on debut, so it was striking to see Capture the Flag deliver an impressive victory in his first run under colors on Saturday at Saratoga. After tracking an opening quarter mile in 22.75 seconds, Capture the Flag took command and drew off to win a 5 1/2-furlong maiden special weight by three lengths in 1:06.17.

2YO CAPTURE THE FLAG takes the opener at #Saratoga with @luissaezpty aboard! pic.twitter.com/OW3ewOPtRO

As a son of four-time Grade 1 winner Quality Road out of Flower Bowl (G1) winner War Flag, Capture the Flag is bred top and bottom to improve with distance and maturity. The future looks bright for this exciting bay colt.

Fast-working son of Into Mischief ran to his 1-2 odds in a 5 1/2-furlong maiden special weight on Saturday at Del Mar. The Bob Baffert-trained juvenile was quick into stride under jockey John Velazquez, tracking an opening quarter-mile in 21.78 seconds before powering away under a hand ride to trounce his pursuers by 3 1/2 lengths in 1:03.89.

Produced by the Majestic Warrior mare Majestic Presence, Newgate boasts a pedigree geared toward early maturity and looks like a key contender for the Del Mar Futurity (G1) next month.

Is Prank a stakes star in the making for trainer Todd Pletcher? The 2-year-old daughter of Into Mischief certainly looked like one in her Sunday debut sprinting 5 1/2 furlongs at Saratoga.

With three-time Eclipse Award-winning jockey Irad Ortiz in the saddle, Prank blasted to the lead through fast fractions of 21.91 and 45.11 seconds, then extended her advantage while eased up late to dominate by 9 3/4 lengths in the solid time of 1:03.94.

W O W. No joke, that was one heck of a debut for PRANK ?? the 2YO filly crushes her debut in Race 6 at Saratoga with @iradortiz up for @PletcherRacing @StarlightRacing

Keep an eye on this one... pic.twitter.com/Ir99Csy4qU

Prank was favored at odds-on in the betting and certainly lived up to expectations with her impressive romp. The Spinaway (G1) at the end of the Saratoga meet would appear to be a viable target.

The 4-year-old filly Slammed has been a star on the New Mexico circuit, winning seven of her nine starts (including five stakes) between April 2021 and February 2022. But she looks ready to take her stakes game on the road after smashing an $80,000 allowance optional claimer on Thursday at Del Mar.

Making her first start since February, Slammed shrugged off the layoff like it was nothing. After sprinting to the lead through an opening quarter-mile in 22.08 seconds, Slammed roared to a five-length advantage through half a mile in 44.75 seconds. She didn’t let up with a blazing fifth furlong in 11.51 seconds (giving her an eight-length lead through five furlongs in 56.26 seconds), and she ultimately cruised home to win the six-furlong sprint by 5 1/2 lengths in 1:08.55.

Slammed’s lifetime record now stands at 8-for-10, including a 7-for-8 tally in sprints. The Todd Fincher trainee appears capable of winning a graded stakes before the year is over.

Kicked off his post-Triple Crown campaign in style with an impressive victory in the Jim Dandy (G2) at Saratoga. Despite trailing the field early through modest fractions of 24.22 seconds, 48.28 and 1:12.26, Epicenter rallied past rivals down the lane to win by a comfortable 1 1/2 lengths. He sprinted the final three furlongs in about 36.3 seconds (an excellent clocking) and posted a snappy final time of 1:48.99 for 1 1/8 miles. At this point, Epicenter is shaping up as the horse to beat in the Travers (G1) at Saratoga next month.

Brought his 2022 record to 4-for-4 with an easy victory in the Alfred G. Vanderbilt Handicap (G1) at Saratoga, pressing the early pace before taking command to win with utmost ease by two lengths. Jackie’s Warrior stopped the clock for six furlongs in a rock-solid 1:09.74 over a slow track and is well on his way to winning a second Eclipse Award for champion male sprinter.

Shrugged off an 11-month layoff to obliterate an $80,000 allowance optional claimer on Sunday at Del Mar. Favored at 3-5 against four rivals, Laurel River pressed early splits of 22.32 and 45.79 seconds, then took command and pulled away to win by 4 3/4 lengths under a hand ride. Laurel River completed the one-mile heat in 1:36.17 and looks bound for stakes company.

Last year’s Breeders’ Cup Juvenile Turf Sprint winner brought her record dashing five furlongs to 5-for-6 with a determined victory in the Daisycutter Handicap at Del Mar. Facing older rivals for the first time proved to be no obstacle as Twilight Gleaming dueled graded-stakes winner Leggs Galore into submission before digging down to beat deep closer Xmas Surprise by half a length in 56.90 seconds.

Had a rough go of things in her graded-stakes debut, finishing last of four in the Honorable Miss Handicap (G2) at Saratoga. Amadevil opened up a daylight early lead but soon gave away and was eased down the homestretch. The Equibase result chart indicates she bled and was vanned off, so here’s hoping Amadevil quickly bounces back to good health.

Last year’s champion 2-year-old male completely misfired in his 2022 debut, finishing last of nine in the Amsterdam (G2) at Saratoga. But Corniche previously had gone undefeated in three starts (including two Grade 1 wins), so I won’t drop him off a single failure.

Ran well below expectations in the Jim Dandy, carving out a modest pace before giving way to finish last of four. He was beaten only 3 3/4 lengths, but this marked a sharp reversal from the form of his Preakness victory over Epicenter. I’ll draw a line through this effort and give Early Voting a chance to rebound.

Showed a new dimension tracking the pace in the Jim Dandy before staying on to finish second, beaten only 1 1/2 lengths. This was a solid try in Zandon’s first run since finishing third in the Kentucky Derby, and I’m optimistic it will set him up well for a race like the Travers.