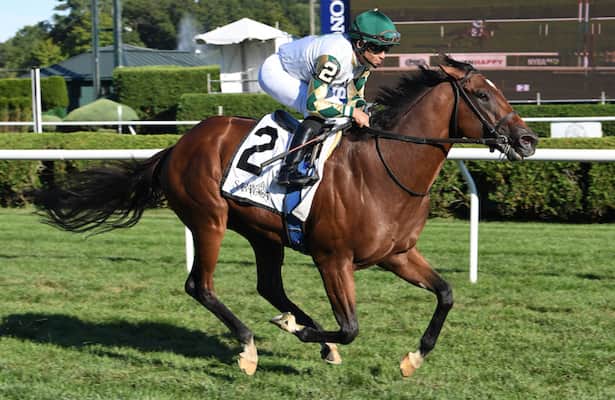 Big Invasion has arguably been flying under the radar a bit, but the talented turf sprinter appears poised for a big fall campaign after dominating Sunday’s Mahony dashing 5 1/2 furlongs over the Saratoga lawn. The 3-year-old Christophe Clement trainee settled seven lengths behind an opening quarter-mile in 21.76 seconds, then unleashed a terrific kick around the turn and down the homestretch to roar past rivals and win by three lengths. Big Invasion never was asked for his best but still posted strong finishing fractions to record his fifth consecutive stakes win. The Breeders’ Cup Turf Sprint is a viable year-end goal.

One of the most impressive 2-year-olds to debut this year is Cave Rock, a son of champion and Breeders’ Cup Classic winner Arrogate trained by Bob Baffert.

Cave Rock entered a 6 1/2-furlong maiden special weight on Saturday at Del Mar off a lengthy series of bullet workouts and definitely ran to his 6-5 odds. Carving out quick fractions of 22.10 and 44.55 seconds did nothing to tire Cave Rock, who powered clear with complete ease down the homestretch to win by six lengths in 1:15.81.

Cave Rock was rewarded with a massive 101 Beyer speed figure, tied for the highest figure assigned to a juvenile so far this year. Could we be looking at the 2022 Breeders’ Cup Juvenile winner?

First-time starter from the barn of Todd Pletcher ran out of his skin in a seven-furlong maiden special weight on Saturday at Saratoga. Sent to the front through fractions of 22.75 seconds, 45.56 and 1:10.17, Expressman extended his advantage with ease down the homestretch and won eased up by 7 1/4 lengths.

Expressman reached the finish line in a snappy 1:22.94, earning a powerful 107 Beyer speed figure. There’s no telling how good this 3-year-old son of Liam’s Map might be.

Could I’m Very Busy be a young grass star in the making for trainer Chad Brown? The son of Preakness winner Cloud Computing certainly looked like one in a 1 1/16-mile turf maiden special weight on Saturday at Saratoga.

After settling as many as seven lengths behind slow early fractions of 23.73 seconds, 49.17 and 1:14.30, I’m Very Busy unleashed a powerful finish under jockey Flavien Prat, roaring to the front inside the furlong marker to dominate by 3 3/4 lengths. I’m Very Busy ran the final five-sixteenths in about 28.2 seconds (an excellent clocking) and surely is bound for stakes company in the near future.

Raced outside of traffic in the Saratoga Special (G2) at Saratoga, then took command and finished up nicely to win by 3 1/4 lengths. The son of Girvin stopped the timer in 1:17.94 for 6 1/2 furlongs and now boasts a 2-for-2 record, emerging as an early leader of the juvenile division.

Bounced back to the winner’s circle with a decisive victory in the Yellow Ribbon Handicap (G2) at Del Mar, finishing fast from midfield to win by three lengths. A seven-time graded stakes winner, Going Global remains a leader among California’s female grass runners.

Ran into traffic between rivals on the turn of the Saratoga Special and had to check sharply, losing ground and momentum in the process. But to Gulfport’s credit, he re-rallied to finish second by a wide margin and actually gained a little ground on Damon’s Mound through the final furlong, suggesting the margin might have been closer (or the outcome reversed) if Gulfport had gotten a clean run.

Ran well against males in Fourstardave (G1) at Saratoga, finishing second by 1 1/2 lengths behind multiple Grade 1 winner Casa Creed. Regal Glory remains a standout among female turf milers and figures to be tough in the First Lady (G1) at Keeneland this fall.

Rhetoric
Sconsin
Top of the Charts