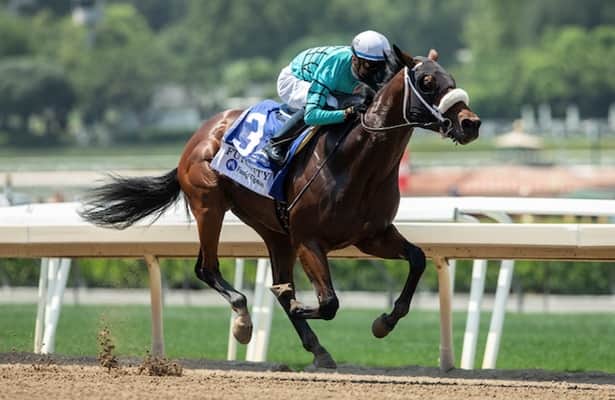 Talk about a flashy prospect. After obliterating his debut against California-breds by 12 1/2 lengths, the 2-year-old Big City Lights thrashed four rivals with utmost authority in Sunday’s Fasig-Tipton Futurity at Santa Anita.

Sprinting five furlongs over the main track, Big City Lights led by at least two lengths at every call, gradually widening his advantage under hand urging to score by 7 1/4 lengths in a quick :58.20. For the sake of comparison, 2-year-old filly At the Spa required :59.79 to complete the Fasig-Tipton Debutante Stakes later in the afternoon.

Only time will reveal how much long-term potential Big City Lights has in store, but for the moment, he has to be viewed as a standout among California’s early-season juveniles. Graded stakes races at Del Mar are surely on the horizon for this Luis Mendez trainee.

Three-time stakes winner Get Smokin is known for his abundant early speed, but the son of Get Stormy arguably went too fast, too soon in Sunday’s Poker Stakes (G3) at Belmont Park. Racing one mile over the Widener turf course, Get Smokin wound up dueling for the lead through increasingly intense fractions of :22.52, :44.60, and 1:08.38.

Get Smokin was bound to tire after setting such an ambitious pace, but to his credit, he led to the final furlong and was ultimately beaten just 4 3/4 lengths in fifth place. Late runners swept the superfecta, and Get Smokin’s pace rivals weakened to finished seventh and eighth, so it is safe to say Get Smokin survived best of the speed horses.

If Get Smokin is able to ration his speed more effectively next time, he can add another stakes win to his resume.

Could Pretty Birdie be a future stakes winner in the making? The 2-year-old filly certainly looked like a promising prospect when dominating her debut on Friday at Churchill Downs.

With Joe Talamo in the saddle for trainer Norm Casse, Pretty Birdie broke on top and dashed to the lead through quick fractions of :22.16 and :44.91. Down the lane, she ran straight and true, professionally sprinting the final furlong in a solid :12.37 to win the five-furlong sprint by 3 3/4 lengths in :57.28.

#4 Pretty Birdie takes 'em every step of the way in Race 2 from @ChurchillDowns, breaking her maiden at first asking with @JoeTalamo in the irons for @NormCasse.

A daughter of Bird Song out of the Street Sense mare Bird Sense, Pretty Birdie has the pedigree to improve with maturity and handle longer distances, so her long-term future looks bright. In the meantime, don’t be surprised to see her turn up in a graded stakes at Saratoga – perhaps the six-furlong Schuylerville Stakes (G3) on July 15, or the 6 1/2-furlong Adirondack Stakes (G2) on Aug. 8.

Although Crystal Cliffs was beaten for the third straight time in Sunday’s 1 1/16-mile Eatontown Stakes (G3) at Monmouth Park, I won’t judge her performance too harshly. Stepping up in class off a runner-up effort against allowance company, Crystal Cliffs settled back in 10th place before rallying gamely down the lane to finish in a dead heat for third.

Modest fractions of :24.54, :48.70, and 1:12.12 weren’t exactly beneficial to Crystal Cliffs, and fast finishing splits of :23.75 and :06.03 made her task of catching up even more difficult. Nevertheless, Crystal Cliffs gained ground resolutely, picking up two lengths through the final five-sixteenths of a mile to finish just 2 3/4 lengths behind pace-tracking winner Vigilantes Way. The fact 23-1 long shot pacesetter Valletta held on to finish second demonstrates how the pace was favorable to speed horses.

With a better setup next time, I’m optimistic Crystal Cliffs can bounce back to the winner’s circle.