Horses to Watch: 4 from Fair Grounds, plus 1 to drop 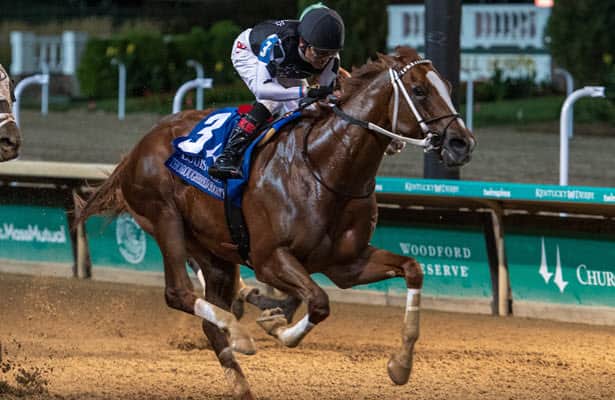 Technically speaking, Just Might placed eighth in the Duncan F. Kenner Stakes, sprinting 5 1/2 furlongs over the Fair Grounds turf course. But that’s only because he caused a string of early interference that resulted in a disqualification.

In every other respect, Just Might ran a winning race. Indeed, he led at every call to cross the wire in front by 2 3/4 lengths. His final time of 1:03.40 seconds was fast over a good course and produced a 103 Beyer speed figure, easily the highest figure earned on turf so far in 2022.

Just Might won seven stakes in 2021, more than any other horse in the U.S. or Canada, and he’s proven equally effective on both dirt and turf. The way he’s progressing, I expect this 6-year-old gelding to win a graded stakes in the near future.

Mandaloun isn’t the most creative addition to my watch list. He’s hardly an untested up-and-comer; as a 3-year-old last season, he won the Grade 1 Haskell and crossed the finish line second in the Kentucky Derby.

But as accomplished as Mandaloun might be, I believe he still has upside for improvement. He ran huge off a long layoff in the Louisiana (G3) at Fair Grounds, tracking the pace from third place before rallying gamely to beat 2021 Preakness runner-up Midnight Bourbon by three-quarters of a length.

Mandaloun was full of run down the homestretch, running the third quarter-mile in about 23.9 seconds and the final sixteenth in about 6.3 seconds to complete the 1 1/16-mile race in 1:42.52. The result was an excellent 106 Beyer speed figure. Suffice to say, trainer Brad Cox appears to have a top-class older horse waiting to fill in for the soon-to-be-retired Knicks Go.

The beautifully bred filly La Crete joined the Road to the Kentucky Oaks with a tenacious victory in the Silverbulletday at Fair Grounds.

A daughter of Medaglia d’Oro out of three-time Grade 1 winner Cavorting (the dam of Grade 1 winner Clairiere), La Crete could easily have settled for second place in the Silverbulletday. After setting fractions of 24.50 and 48.79 seconds in the one-mile and 70-yard heat, La Crete was passed by her stakes-placed rival Fannie and Freddie. The latter led by half a length at the eighth pole, but La Crete refused to concede, battling back to win by a length in 1:43.93 seconds.

La Crete is bred to keep improving with maturity, so the Kentucky Oaks looms as a viable spring goal.

Epicenter ran too good to lose in the Lecomte (G3) at Fair Grounds. After sprinting to the lead through fractions of 23.40, 47.01 and 1:12.16 (on the quick side for Fair Grounds), Epicenter turned back an inside challenge from 3-2 favorite Pappacap, only to get caught in the final strides by stretch-running long shot Call Me Midnight.

Epicenter was beaten only a head in the respectable final time of 1:44.36 for 1 1/16 miles, so the Steve Asmussen trainee remains a player worth following on the Road to the Kentucky Derby.

Couldn’t quite match strides with the top three finishers in the Lecomte, racing a few lengths off the pace throughout while finishing fourth by 4 1/4 lengths. It wasn’t a bad effort, but I was hoping for more of a step forward off Trafalgar’s previous Fair Grounds allowance win.