Horses to Watch: 3 turf fillies poised for success in 2022 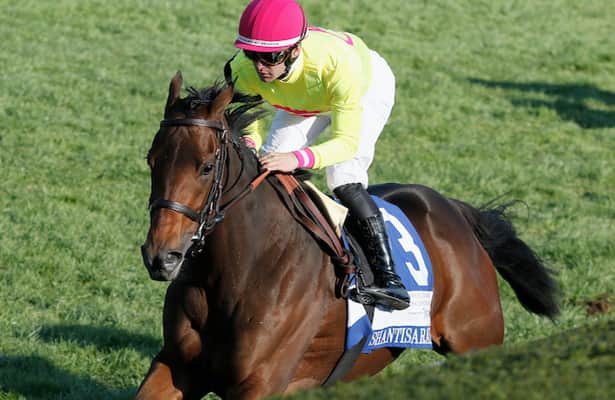 Shantisara was bred in Ireland and initially campaigned in France, but the U.S. is where she has developed into a star. The Chad Brown trainee has been on a hot streak in the last two months, winning the Pucker Up (G3) at Arlington Park and the Jockey Club Oaks at Belmont Park before unleashing a powerful performance in Keeneland’s Queen Elizabeth II Challenge Cup (G1) on Saturday.

Indeed, Shantisara was spectacular in the Queen Elizabeth. The 3-year-old daughter of Coulsty settled a couple of lengths behind early fractions of 23.91, 48.63, and 1:12.78 over a yielding turf course, then pounced to the front down the homestretch. Pouring on speed with authority, Shantisara drew off to beat a deep field (including multiple graded-stakes winner Technical Analysis) by five lengths.

Even over yielding turf, Shantisara managed to blaze the final furlong in 11.86 seconds to record a solid final time of 1:48.86. The Queen Elizabeth might have been Shantisara’s first Grade 1 win, but I don’t believe it will be her last. If she keeps improving with maturity, 2022 can be a big year for Shantisara.

The running of the E. P. Taylor (G1) at Woodbine on Sunday was hardly conducive to successful performances from late runners. The 1 1/4-mile event for fillies and mares took place over a yielding turf course, and the early pace fractions were snail-like: 27.26, 54.46, and 1:20.84 seconds.

Yet despite these challenging circumstances, La Dragontea ran a huge race while rallying from off the pace. Content to trail the field for the first mile, La Dragontea somehow gained 3 3/4 lengths through a final quarter mile in 23.79 seconds to finish second, beaten only a neck by the pace-tracking winner Mutamakina.

Any way you slice it, this was a massive effort from La Dragontea, especially considering she had to shift outside and split horses down the lane. A 4-year-old filly conditioned by Christophe Clement, La Dragontea has improved by leaps and bounds in recent starts. Prior to the E. P. Taylor, she employed pace-tracking tactics to post a one-length score in the Canadian (G2) at Woodbine. Her versatility is an asset, and she appears to have more upside. I do not think we have see La Dragontea’s best yet, and if the E. P. Taylor is any indication, she might be capable of winning at the Grade 1 level in 2022.

La Dragontea wasn’t the only runner to receive a less-than-perfect trip in the E. P. Taylor. Great Island was caught wide every step of the way while racing in fifth place, a position she occupied at every call. Her running line might appear a bit dull at first glance, but the fact that Great Island was beaten only 1 3/4 lengths is a testament to the gutsy race she ran while conceding considerable ground. I’m optimistic Great Island can bounce back with a better trip next time.