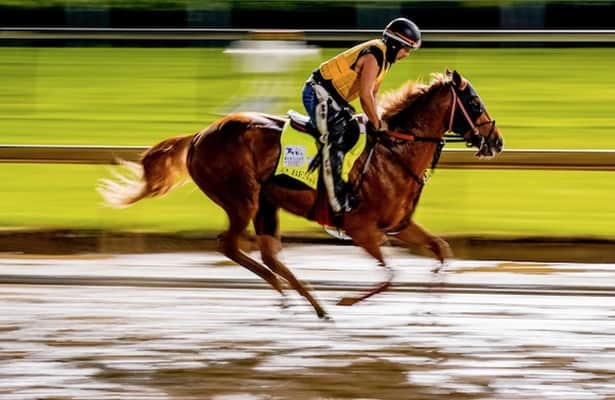 The third time was the charm for Constitutionlawyer, a 3-year-old son of Constitution who broke his maiden racing 1 1/8 miles on Jan. 2 at Aqueduct.

Constitutionlawyer knocked heads with some tough rivals during his first two starts on the New York circuit.

In his debut over 1 1/16 miles at Belmont, Constitutionlawyer ran fourth behind next-out Remsen (G2) winner Mo Donegal and a pair of future maiden winners. Then in a 1 1/8-mile event at Aqueduct, Constitionlawyer checked in third behind next-out Jerome hero Courvoisier.

Constitionlawyer’s breakthrough victory came in impression fashion. After employing rallying tactics in his first two runs, Constitutionlawyer displayed vastly improved tactical speed on Jan. 2, carving out fractions of 23.61, 47.77 and 1:12.74 before kicking away to win by 3 1/2 lengths.

Constitutionlawyer reached the finish line in 1:52.29 seconds, a respectable time for a 3-year-old during the winter at Aqueduct. I have the feeling Constitutionlawyer will be a great fit for the Feb. 12 Grade 3 Withers (G3) racing 1 1/8 miles at Aqueduct, hence his addition to my watch list.

O Besos wasn’t the most accomplished 3-year-old to compete in 2021, but we can’t deny he held his own against tough company. Third in the Louisiana Derby(G2) behind the classic-placed duo of Hot Rod Charlie and Midnight Bourbon. Fifth in the Kentucky Derby behind Grade 1 winners Medina Spirit, Mandaloun, Hot Rod Charlie, and Essential Quality. Second in the Matt Winn (G3) behind multiple graded stakes winner Fulsome.

On Jan. 2 at Fair Grounds, O Besos returned from a seven-month layoff in a 1 1/16-mile allowance optional claimer at Fair Grounds. Facing five rivals, O Besos settled off the pace in fifth place behind modest fractions of 24.21, 48.46 and 1:13.51 seconds. Then he unleashed a powerful finish down the homestretch, sprinting the final five-sixteenths of a mile in approximately 30.32 seconds (an excellent fraction) to win by a nose over the graded stakes-placed Intrepid Heart.

The final time of 1:43.91 seconds translated to a solid 93 Beyer speed figure, and I don’t think we’ve seen the best O Besos has to offer yet. If he keeps improving with maturity, I believe O Besos will win a graded stakes before long.

To be honest, I’m not quite sure what to expect when Sayyaaf returns from a long layoff in Sunday’s fifth race at Gulfstream Park, a $35,000 claimer (post time 2:31 p.m. EST). But I’m hoping he’ll prevail in this five-furlong turf dash.

Sayyaaf showed promising form over the Gulfstream Park grass last winner, wiring back-to-back $62,500 allowance claimers running one mile and 1 1/16 miles with strong Brisnet Speed ratings. He had the appearance of a stakes horse in the making until he shipped to Churchill Downs for the April 29 Opening Verse, where he faded to finish seventh over a damp course.

Sayyaaf subsequently disappeared from the work tab until November, and Saturday’s heat will mark his first run in 8 1/2 months.

Cutting back to five furlongs is a question mark, and the fact he’s entered for a claiming tag isn’t the best sign. But perhaps returning to Gulfstream (where he boasts a 3-for-5 record) can trigger a victory.