Horses to Watch: 3 new names and 3 to keep 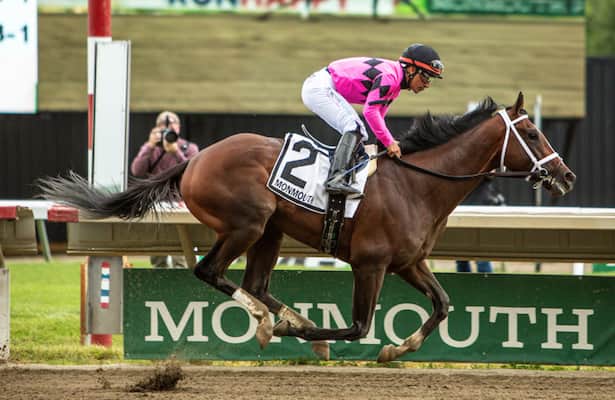 Just how good is the California-bred 4-year-old Bolden? Your guess is as good as mine because no one has come close to defeating Bolden in three starts so far.

As a 2-year-old in June 2020, Bolden smashed his debut sprinting five furlongs against California-breds at Santa Anita, leading all the way to win by 5 1/2 lengths. He subsequently spent close to two years on the sidelines before returning in a six-furlong allowance optional claimer for California-breds at Santa Anita, which he obliterated by six lengths in 1:09.85 seconds.

But Bolden elevated his game to another level entirely when switching to turf for a six-furlong allowance optional claimer Friday at Santa Anita. Once again facing California-bred rivals, Bolden carved out fast fractions of 21.76 and 44.16 seconds before blazing the final two furlongs in 11.35 and 11.99 seconds to power clear and win by 7 3/4 lengths in 1:07.50 seconds.

Trained by Phil D’Amato, Bolden has a world of talent and is clearly effective on both dirt and turf. The future looks bright for the son of Square Eddie, who is surely bound for stakes company (perhaps even graded company) in the near future.

Home Brew took time off after a disappointing 10th-place finish in the Jan. 1 Smarty Jones on the Road to the Kentucky Derby, but since returning to action in late April, he has looked like a graded-stakes type in the making.

Home Brew dashed the fourth quarter-mile in about 23.64 seconds and the final 16th in 6.30 seconds, both excellent fractions. The Brad Cox trainee is progressing in a positive direction and looks like a serious contender for the Haskell (G1) at Monmouth.

A well-bred daughter of Munnings out of a Medaglia d’Oro mare, Munnys Gold looked rather like a freak when dominating her debut on Friday at Monmouth Park. Favored to win a five-furlong maiden special weight, the Todd Pletcher-trained filly carved out fractions of 22.41 and 45.22 seconds before rocketing the final furlong in 11.38 seconds to smash her pursuers by 14 1/2 lengths.

Munnys Gold reached the finish line in an excellent 56.60 seconds, earning an exceptional 101 Beyer speed figure. Don’t be surprised if we see her square off against graded-stakes company at Saratoga this summer.

In his first start since finishing second in the Dubai World Cup (G1) overseas, Hot Rod Charlie ran a strong race in the Salvator Mile (G3) at Monmouth Park. Negotiating a one-mile journey arguably shorter than his best, Hot Rod Charlie tracked the early pace before failing by a head to outduel pacesetting two-time Grade 1 winner Mind Control. The final time of 1:35.79 was quick, so this is an effort Hot Rod Charlie can build on.

Reigning Breeders’ Cup Juvenile Fillies Turf winner failed to fire her best shot when shipping to Royal Ascot for the Group 1 Coronation, finishing eighth. We’ll give her a chance to rebound upon returning to the U.S.

Grade 1-winning turf miler was far from disgraced when trying dirt in the Salvator Mile, finishing third by 6 1/4 lengths against Mind Control and Hot Rod Charlie. This was a respectable effort against tough competition over a surface that probably isn’t Shirl’s Speight’s best.

Here's my complete, updated list of Horses to Watch.