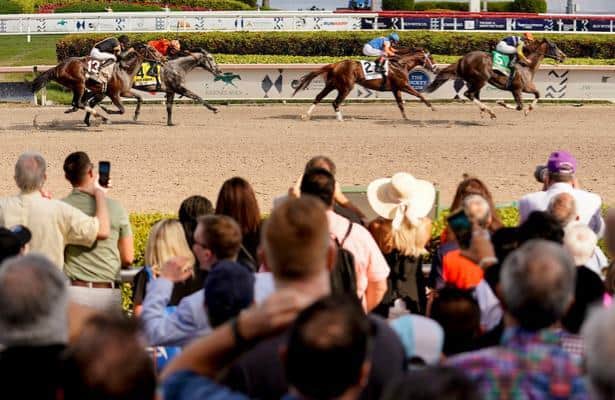 Since his debut in August 2020, Olympiad has knocked heads with some elite racehorses. Across his first five starts, the son of Speightstown finished ahead of stakes winners Crowded Trade, Caddo River, Greatest Honour, Code of Honor, Ginobili and Independence Hall, to name a few.

But I don’t think we’ve seen the best Olympiad has to offer. His first five starts (including a troubled fourth in the Grade 1 Cigar Mile Handicap) came in one-turn races. When he stretched out around two turns for a 1 1/16-mile allowance optional claimer on Saturday at Gulfstream Park, Olympiad ran out of his skin.

Olympiad might have received an easy trip, but he capitalized in impressive fashion and appears to have found a new home running long. I’m excited to see what this Bill Mott-trained 4-year-old can accomplish in 2022.

Two starts, two victories. The California-bred 3-year-old filly Rose Dawson might be something special after opening her career with a pair of victories under vastly different circumstances.

Rose Dawson was as sharp as could be in her debut, sprinting 5 1/2 furlongs over the Los Alamitos dirt. Unhurried early, the daughter of Grazen rallied boldly around the turn and down the homestretch to finish quickly and win by four lengths.

But Rose Dawson was even more impressive in the Leigh Ann Howard California Cup Oaks on Saturday at Santa Anita. Switching to turf and stretching out over one mile proved to be no obstacle – after trailing through fractions of 23.11, 46.96 and 1:11.40 seconds, Rose Dawson unleashed an explosive late charge to win by a length.

Rose Dawson sprinted the final quarter-mile in about 23.6 seconds (an excellent fraction) to complete the race in 1:36.07. I won’t be surprised if Rose Dawson eventually proves capable of competing against open company – perhaps even graded-stakes company.

Switching from turf to Tapeta and returning from an 8 1/2-month layoff couldn’t stop Sayyaaf from posting a blowout victory in a $35,000 claimer on Sunday at Gulfstream Park.

Favored at even money to win the five-furlong dash, Sayyaaf left no doubt about his superiority. The Mike Maker trainee dashed to the front through an opening quarter-mile in 21.71 seconds, widened his advantage through a half-mile in 45.01 seconds and then finished up nicely to win by 3 3/4 lengths in 56.66 seconds.

With this impressive victory under his belt, Sayyaaf appears poised to jump back up the class ladder, perhaps into allowance company. He seems equally effective sprinting and routing, and he handles turf and Tapeta just fine, so Sayyaaf will have plenty of options for future starts.