Horses to Watch: 30 in the entries for Derby week 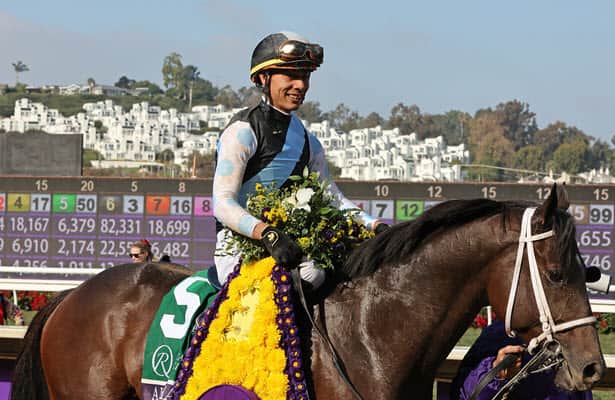 Talented sprinter unleashed her trademark turn of foot to win the Unbridled Sidney at Churchill Downs by a neck, bringing her record sprinting 5 1/2 furlongs on turf to a perfect 4-for-4.

The reigning Breeders’ Cup Sprint winner returns to action in Saturday’s 10th race at Churchill Downs, the Churchill Downs (G1) (post time 4:31 p.m. EDT). Aloha West was improving by leaps and bounds at the end of 2021 and has trained strongly for his 2022 debut, so expect to see him unleash his signature homestretch charge on Saturday.

Racing 1 1/4 miles in Saturday’s 12th race at Churchill Downs, the Kentucky Derby (post time 6:57 p.m. EDT) should suit Charge It just fine. The lightly raced youngster looked like a work in progress when racing greenly to finish second in the Florida Derby (G1), but he’s bred to run long and has lots of upside for improvement.

Two-time allowance winner Cody’s Wish ran strongly in his graded stakes and two-turn debut, finishing second by a neck in the Challenger (G3) at Tampa Bay Downs. The winner (Scalding) came right back to nab the Ben Ali at Keeneland (G3), so Cody’s Wish should be tough while cutting back to a one-turn mile for Saturday’s 10th race at Belmont Park, the Westchester (G3) (post time 5:37 p.m.). Take note, all three of his victories have come in one-turn miles.

Can Echo Zulu keep her unbeaten record intact in Friday’s 11th race at Churchill Downs, the Kentucky Oaks (G1) (post time 5:51 p.m.)? The front-running filly won three Grade 1 prizes by daylight last season, but ran below expectations when kicking off 2022 with a nose victory in the Fair Grounds Oaks (G2). However, if Echo Zulu she steps forward in her second start of the season, she can challenge for victory at Churchill.

Four-time stakes winner Eda has won the Starlet (G1) and Santa Ysabel (G3) racing 1 1/16 miles, but her flashiest efforts have come in sprints. She figures to appreciate cutting back to seven furlongs for Sunday’s fifth race at Santa Anita, the Angels Flight (post time 6:00 p.m.), in which she’s shaping up as a heavy favorite on paper.

Edgeway has really come to hand in recent starts, sandwiching victories in the Rancho Bernardo Handicap (G3), Kalookan Queen, and Las Flores (G3) around a runner-up finish in the Breeders’ Cup Filly & Mare Sprint. A typical run from Edgeway should place her in the hunt for victory in Saturday’s eighth race at Churchill Downs, the Derby City Distaff (G1) (post time 2:48 p.m.).

Fresh off impressive victories in the Risen Star (G2) and Louisiana Derby (G2), Epicenter looms as a formidable Kentucky Derby win threat. The Steve Asmussen trainee may have to use his speed to avoid a boxed-in journey from post 3, but Epicenter is versatile enough to rate off the lead if necessary.

The occasionally brilliant Growl Tiger recently returned from a one-year layoff to trounce a $16,000 allowance optional claimer at Tampa Bay Downs by 8 1/4 lengths. If the speedy son of Speightstown reproduces that effort in Sunday’s sixth race at Monmouth Park, a $30,000 allowance optional claimer (post time 2:40 p.m.), he can win right back and continue his upward trajectory.

High Connection was tons the best in his debut sprinting 6 1/2 furlongs at Santa Anita, wiring a maiden special weight by 10 lengths. A similar effort while stretching out over 1 1/16 miles would make High Connection difficult to catch in Sunday’s third race at Santa Anita, a $100,000 allowance optional claimer (post time 5:00 p.m.).

Last year’s runaway Grade 1 Champagne winner will return from a long layoff in Saturday’s seventh race at Churchill Downs, the Pat Day Mile (G2) (post time 1:56 p.m.). The speedy Chad Brown trainee is 2-for-2 and has trained forwardly for his 3-year-old bow, so don’t be surprised if Jack Christopher leads them all the way home.

Champion sprinter kicked off his 2022 campaign with a solid victory in the Count Fleet (G3) Sprint Handicap at Oaklawn. Jackie’s Warrior is brilliant on his best day and will aim to keep his momentum rolling against Aloha West in the Churchill Downs.

Unraced since a runner-up finish behind Echo Zulu in the Breeders’ Cup Juvenile Fillies, Juju’s Map will make her 3-year-old debut in Friday’s fourth race at Churchill Downs, a $62,500 allowance optional claimer (post time 12:05 p.m.). Juju’s Map won the Grade 1 Darley Alcibiades over this 1 1/16-mile trip last fall and looms as a heavy favorite off the layoff for high-percentage trainer Brad Cox.

Dueling for the lead through fast fractions arguably burned up Lady Rocket in the Madison (G1) at Keeneland last month, her 2022 debut. Last year’s Go for Wand (G3) Handicap winner can move forward if she avoids a speed duel against Edgeway and others in the Derby City Distaff.

Undefeated in five sprint starts, including a quartet of stakes, Marissa’s Lady is a key contender in Friday’s ninth race at Churchill Downs, the Eight Belles (G2) (post time 4:04 p.m.). Although she’s been competing on Tapeta as of late, Marissa’s Lady is 2-for-2 on dirt and won the Fern Creek at Churchill Downs last fall over the Eight Belles morning line favorite Matareya.

Speaking of Matareya, she’s shown improvement since finishing second in the Fern Creek behind Marissa’s Lady, most recently trouncing the Beaumont (G3) at Keeneland by 8 1/2 lengths. There’s a good chance this Brad Cox trainee can turn the tables on Marissa’s Lady in the Eight Belles.

Did you know Messier posted triple-digit Brisnet E1, E2, Late Pace, and Speed ratings when finishing second in the Santa Anita Derby (G1)? That’s a rare feat, and one suggesting Messier is good enough to outrun expectations in the Kentucky Derby. Don’t be surprised if he gets involved early under jockey John Velazquez, who has led every step of the way in the last two Derbys aboard Authentic and Medina Spirit.

By sprinting the final three furlongs of the Wood Memorial (G2) in a blazing 35.61 seconds, Mo Donegal managed to win by a neck with a powerful 111 Brisnet Speed rating. A repeat performance in the Kentucky Derby could make Mo Donegal the first Derby winner to start from post 1 since Ferdinand in 1986.

A stoutly bred daughter of Curlin, Nest looked like a star in the making when rallying from behind a slow pace to dominate the Ashland (G1) at Keeneland by 8 1/4 lengths. The Kentucky Oaks morning line favorite is bred to thrive in the mud and shouldn’t mind if the Oaks is contested over wet going, as weather forecasts suggest will be the case.

A three-time graded stakes winner who has twice placed at the Grade 1 level, Obligatory started 2022 on a fine note, dominating the Hurricane Bertie (G3) by three lengths. She’s set to face a tough field in the Derby City Distaff, but is 2-for-2 at Churchill Downs and figures to factor while returning to Louisville.

Olympiad has gone 3-for-3 since stretching out around two turns, most notably posting comfortable victories in the Mineshaft (G3) and New Orleans Classic (G2) at Fair Grounds. This improving Bill Mott trainee is a logical choice to take down Friday’s seventh race at Churchill Downs, the Alysheba (G2) (post time 2:09 p.m.).

Although Reinvestment Risk was beaten to second place in the Carter Handicap (G1), the only horse to beat him was Speaker’s Corner, one of the fastest and most promising older runners in the country. Reinvestment Risk is facing another tough field in the Churchill Downs, with Aloha West and Jackie’s Warrior among his key rivals, but Reinvestment Risk has placed three times at the Grade 1 level and can’t be dismissed.

The runaway Martha Washington and Honeybee (G3) winner had a tough trip when finishing third against males in the Arkansas Derby (G1). If Secret Oath works out a cleaner voyage in the Kentucky Oaks, the daughter of Arrogate can step forward and vie for victory at a solid price.

Unbeaten in three starts this season, Shirl’s Speight produced a remarkable turn of foot to win the Maker’s Mark Mile (G1) at Keeneland three weeks ago. Sprinting the final two furlongs in 10.94 and 11.14 seconds is a sign of serious talent, so Shirl’s Speight is eligible to win right back in Saturday’s 11th race at Churchill Downs, the Old Forester Bourbon Turf Classic (G1) (post time 5:27 p.m.).

The runaway Grade 2 Fountain of Youth winner didn’t get the best trip when dueling for the lead through hot fractions in the Florida Derby (G1). Nevertheless, Simplification fought on to finish third by just 2 1/4 lengths and is eligible to improve with a more conservative trip in the Kentucky Derby. Remember, he won the Fountain of Youth with a rally from midfield.

Stretch-running Smile Happy arguably raced too close to the pace and moved too soon when finishing second in the Grade 1 Blue Grass, beaten 2 1/2 lengths by Kentucky Derby favorite Zandon. Smile Happy won the Kentucky Jockey Club (G2) at Churchill Downs last fall and could be sitting on a big effort in the Kentucky Derby, which will mark his third run of the season.

Two starts, two victories, two triple-digit Brisnet Speed ratings. Only Leonatus in 1883 has won the Kentucky Derby off of two career starts, but if anyone can end the Leonatus curse, its Taiba. The $1.7 million auction acquisition unleashed a relentless homestretch rally to beat Messier by 2 1/4 lengths in the Santa Anita Derby (G1), earning a massive 111 Brisnet Speed rating. There’s a ton of raw talent here.

Although Jeff Ruby Steaks (G3) winner Tiz the Bomb has made a name for himself on turf and synthetic, he broke his maiden on dirt by 14 1/4 lengths and is eligible to outrun expectations in the Kentucky Derby. He might actually appreciate the Churchill Downs main track, which has a reputation for playing kinder toward turf horses than other dirt surfaces.

The Kentucky Derby morning line favorite unleashed an eye-catching last-to-first rally in the Blue Grass (G1), posting a 114 Brisnet Late Pace rating to defeat Smile Happy by 2 1/2 lengths. The Kentucky Derby will mark Zandon’s third run of the season, so the Chad Brown trainee is eligible to produce a career-best effort.

Failed to fire with a rough trip in the Kentucky Juvenile at Churchill Downs, finishing 11th by 19 1/2 lengths. We’ll wait and see how King Adrock bounces back before playing him again.