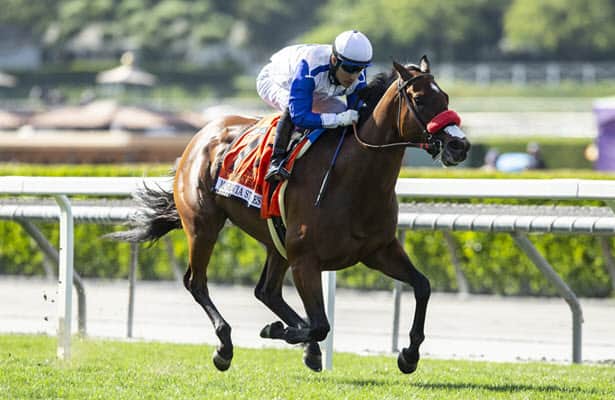 Although Tobys Heart competed with aplomb in a pair of one-mile stakes during the summer, I’m excited to see what the 3-year-old daughter of Jack Milton can accomplish when cutting back to 6 1/2 furlongs for Sunday’s eighth race at Kentucky Downs, the Music City (post time 5:15 p.m. EDT).

Tobys Heart boasts a near-perfect 3-for-4 record sprinting, highlighted by victories in the Bolton Landing at Saratoga and the Limestone Turf Sprint at Keeneland. Her talent has translated to some encouraging efforts over longer trips, including a third-place finish in the Lake George (G3) at Saratoga, but the fact remains Tobys Heart is 0-for-3 running one mile or farther.

The Music City has drawn a full field packed with talented fillies, including Navratilova, who defeated Tobys Heart in the one-mile Tepin at Churchill Downs two starts back. But Sunday’s shorter distance may give Tobys Heart the advantage, especially with Kentucky Downs’ leading jockey Joel Rosario in the saddle.

Dashing 6 1/2 furlongs on grass should be right up Venetian Harbor’s alley, considering she dominated Santa Anita’s Monrovia (G2) over those exact conditions to kick off her 2021 campaign. A large field has turned out for the Mint Ladies Sprint, but Venetian Harbor is favored on the morning line and looks like the filly to beat under Florent Geroux, the leading rider at Kentucky Downs in 2015 and 2016.

Although favored at 17-10 to win a 6 1/2-furlong starter allowance race on Thursday at Kentucky Downs, Beantown Baby couldn’t close ground when the real running began. After settling in fifth place behind splits of 21.78 and 45.43, the daughter of Artie Schiller rallied into second place, but flattened out through the final furlong and ultimately settled for third place by 1 1/2 lengths.