Horses to Watch: 2 to follow, 1 to drop after Ky. Downs 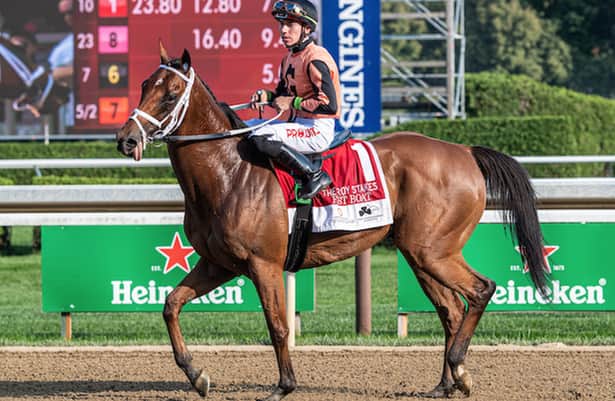 Granted, Fast Boat’s fourth-place finish in the Turf Sprint (G3) at Kentucky Downs isn’t overly eye-catching on the result chart. The son of City Zip settled in sixth place early on – roughly three lengths behind fractions of 22.38 and 45.14 seconds – before gaining ground mildly to finish 2 3/4 lengths behind the winner.

But watch the replay, and I think you will come away more impressed by Fast Boat’s performance. After saving ground early on, Fast Boat was unable to find sufficient racing room and wound up battling his way between rivals around the turn and down the homestretch. Despite racing in very tight quarters (I thought he might fall at one point), Fast Boat battled on gamely and was beaten just a head for second place. With an unencumbered journey, I think he would have gained the runner-up spot.

Even still, Fast Boat finished ahead of Grade 1 winners Casa Creed and Got Stormy, a solid effort in a race where the winner clocked six furlongs in the course-record time of 1:07.9. Fast Boat has been in strong form this season, winning the Twin Spires Turf Sprint (G2) and Troy (G3), and I think there’s a good chance he’ll win another stakes before the year is over.

After placing in a couple of one-mile stakes, Tobys Heart clearly relished cutting back to 6 1/2 furlongs for the Music City Stakes at Kentucky Downs. To put it simply, she ran out of her skin.

With hot jockey Joel Rosario in the saddle, Tobys Heart dropped off the early pace as usual, settling as many as 6 3/4 lengths behind quick fractions of 21.99 and 44.93 seconds. But when called upon to accelerate, Tobys Heart was absolutely full of run, rocketing the third quarter mile in about 22.75 seconds and the final 16th in 5.93 seconds to dominate under a hand ride by 2 3/4 lengths.

Tobys Heart glides home a winner in the Music City Stakes from @KYDownsRacing under an on ?? @JRosarioJockey.

Tobys Heart reached the finish line in a snappy 1:14.36 seconds, not far off the course record of 1:13.87. Tobys Heart is now 4-for-4 running 6 1/2 furlongs or less and 0-for-4 running seven furlongs or farther, so it seems safe to conclude the daughter of Jack Milton has found her niche as a talented turf sprinter.

Although Venetian Harbor was favored at 1-1 to win the Mint Ladies Sprint (G3) at Kentucky Downs, the multiple Grade 1-placed filly failed to produce her A-game. After racing to the lead through a quarter mile in 22.33 seconds, Venetian Harbor weakened steadily to finish 10th out of 12, beaten 13 1/4 lengths.

It’s possible that Venetian Harbor failed to handle the unique European-style turf course at Kentucky Downs – some horses struggle over the undulating conditions. But after two straight defeats, I’ll drop Venetian Harbor from my watch list and wait for her to bounce back before considering her again.