Horses to Watch: 2 juveniles join the list after Churchill wins 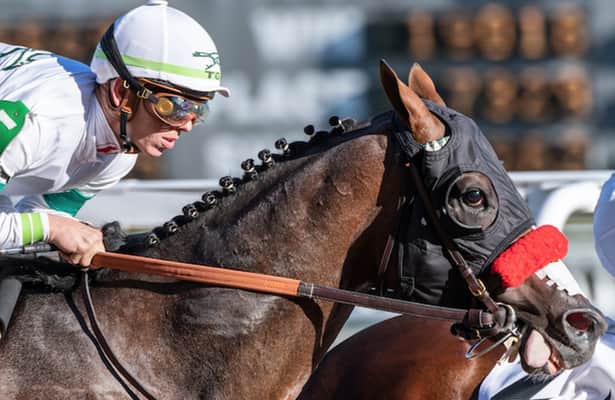 The third time was the charm for Frank’s Honor. After finishing third and fifth in his first two starts around one turn, the Kenny McPeek trainee relished stretching out around two turns for a Saturday maiden special weight at Churchill Downs, leading all the way to dominate by five lengths.

#1 Frank's Honor takes 'em all the way in Race 7 from @ChurchillDowns to break the maiden with @b_hernandezjr up for @KennyMcPeek to pay $14.42.

Off respectable fractions of 24.09 seconds, 48.36 and 1:12.85, Frank’s Honor finished up the final five-sixteenths of a mile in 31.50 seconds to complete the 1 1/16-mile race in 1:44.35. His pedigree (by Honor Code of out of a mare by Medaglia d’Oro) is geared toward late maturity and success running long, so Frank’s Honor has a shot to make noise on the Road to the Kentucky Derby.

Before Tres Soles’s Thursday debut at Churchill Downs, I wrote in Prospect Watch that “Bettors shouldn’t necessarily expect Tres Soles to fire his strongest shot sprinting six furlongs on debut… Any sort of encouraging effort on Thursday could be a sign of big things to come for this Winchell Thoroughbreds colorbearer.”

Tres Soles’s performance was more than encouraging. The stoutly bred son of Justify out of a Tapit mare raced to the front through an opening quarter-mile in 22.62 seconds, fought back when challenged through half a mile in 46.21 seconds and ultimately dashed the final two furlongs in 11.80 and 12.61 seconds to score by a neck in 1:10.62.

#5 Tres Soles tough as nails in taking Race 6 from @ChurchillDowns with @RSantana_Jr up for Steve Asmussen to pay $5.22.

The runner-up pulled 6 1/4 lengths clear of the third-place finish, so it’s safe to say Tres Soles ran a strong race. This Steve Asmussen trainee is bred to improve with maturity and thrive running long, so I’m excited to see what his future holds. Can anyone say Kentucky Derby?

You have to admire Hot Rod Charlie’s consistency and tenacity. In the 1 1/8-mile Lukas Classic (G2) at Churchill Downs, Hot Rod Charlie pressed Grade 1 winner Art Collector through fractions of 23.55, 47.94 and 1:11.77, then forged to the front and turned back a challenge from Kentucky Derby winner Rich Strike to prevail by a head in 1:49.77. The Breeders’ Cup Classic is next on the agenda for Hot Rod Charlie.

It wasn’t the most visually impressive performance, but Life Is Good picked up a fourth Grade 1 victory with a deceptively good performance in the 1 1/8-mile Woodward (G1) at Belmont at the Big A. Setting slow fractions of 24.40, 48.60 and 1:13.07 took away Life Is Good’s greatest weapon – his abundant early speed – but it gave the talented 4-year-old an easy race, allowing him to dash the final three furlongs in a rapid 36.50 seconds and prevail by 1 1/4 lengths in 1:49.57.

This was an ideal prep run five weeks out from the Breeders’ Cup, though whether Life Is Good opts for the Classic or the Dirt Mile remains to be seen.

Blinding speed is clearly a strong suit for Speed Boat Beach. In the Speakeasy sprinting five furlongs over the Santa Anita turf course, the 2-year-old son of Bayern tracked an opening quarter-mile in 21.06 seconds, took command through a blazing half-mile in 43.36 seconds and then edged clear to prevail by 1 1/4 lengths in 55.25 seconds.

Although Forbidden Kingdom was beaten to fifth place in the Santa Anita Sprint Championship (G2) at Santa Anita, I thought he ran well under challenging circumstances. Running against older horses for the first time while returning from a six-month layoff, Forbidden Kingdom carved out intense fractions of 21.58 and 44.18 seconds before weakening down the lane to finish 3 3/4 lengths behind the winner. Forbidden Kingdom came home far ahead of his well-bet pace rival Kid Corleone, so we’ll view this performance in a positive light.

Ran well over a yielding turf course in the Pilgrim (G2) at Belmont at the Big A, rallying from behind a slow pace to finish second by one length against the pace-tracking Major Dude. I’m Very Busy did flatten out a bit down the homestretch (he was within a head of the lead at the eighth pole), but the pace didn’t help his chances and I’m willing to bet he can rebound with a better setup in the future.

I’m not sure the rail was the best part of a sloppy track on Saturday at Belmont at the Big A, so I was encouraged to see Verifying run second in the Champagne (G1) despite racing inside every step of the way. Verifying was always within striking range of a solid pace and rallied to lead in mid-stretch before getting passed in the final furlong by the stretch-running, wide-rallying winner Blazing Sevens. If Verifying moves on to the Breeders’ Cup Juvenile next month, I think he’ll be a live long shot worth supporting.

Picked up another Grade 1 placing when employing pace-tracking tactics to finish third in the Champagne, but after three straight defeats, Gulfport appears to have reached a plateau. I’ll drop him for now and see whether he starts moving forward over the winter.